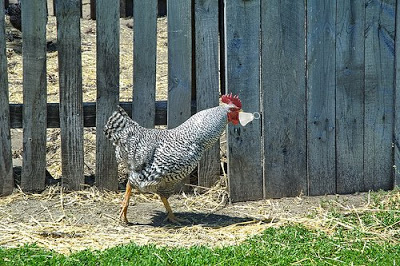 John was in the fertilized egg business. He had several hundred young laying hens, called “pullets”, and ten roosters to fertilize the eggs. He kept records, and any rooster not performing went into the soup pot and was replaced.

This took a lot of time, so he bought some tiny bells and attached them to his roosters. Each bell had a different tone, so he could tell from a distance which rooster was performing. Now, he could sit on the porch and fill out an efficiency report by just listening to the bells.

John’s favorite rooster, old Butch, was a very fine specimen, but this morning he noticed old Butch’s bell hadn’t rung at all! When he went to investigate, he saw the other roosters were busy chasing pullets, bells-a-ringing, but the pullets, hearing the roosters coming, could run for cover.

To John’s amazement, old Butch had his bell in his beak so it couldn’t ring. He’d sneak up on a pullet, do his job and walk on to the next one.

John was so proud of old Butch that he entered him in the Renfrew County Fair, and he became an overnight sensation among the judges. The result was the judges not only awarded old Butch the No Bell Piece Prize but they also awarded him the Pulletsurprise as well.

Clearly old Butch was a politician in the making. Who else but a politician could figure out how to win two of the most highly coveted awards on our planet by being the best at sneaking up on the populace and screwing them when they weren’t paying attention?

Vote carefully this year … the bells are not always audible.

Thanks to Diane Stirling-Stevens | The Rag Blog | Posted September 4, 2008

This entry was posted in RagBlog and tagged Humor, Politics. Bookmark the permalink.