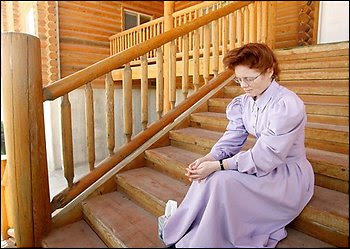 Inside the very private polygamous ranch, “Monica,” a member of the FLDS Yearning For Zion community, near Eldorado,Texas, talks about how Texas officials will not allow her to see her children who were taken from the ranch last week with over 400 other children. (AP Photo/Keith Johnson, Deseret News)

Four still photos and a slice of video were released to The Associated Press by Rod Parker, spokesman for the Fundamentalist Church of Jesus Christ of Latter Day Saints, which owns the raided Yearning for Zion Ranch near San Angelo in Eldorado.

Sect members took the photos and video during the first few days of a seven-day raid that involved police agencies from six counties, the Texas Rangers, the state highway patrol and wildlife officers. Authorities were looking for a teenage girl who had reported being abused by her 50-year-old husband.

A sect member whose wife shot the video said sect members got the impression that state officials “were doing something more than they said they were going to do.” The man declined to give his name for fear that speaking out would cause problems for his children, who are in state custody.

Tela Mange, a state Department of Public Safety spokeswoman, said officers are trained to protect themselves.

“Whenever we serve a search warrant, no matter where or when, we are always as prepared as possible so we can ensure the operational safety of the officers serving the warrant, as well as the safety of those who are on the property in question,” Mange said.

The armored car was precautionary and designed to remove someone from the property, not to force entry onto the ranch, she said.

Parker said rumors have circulated since the 1950s that the FLDS would respond with violence to threats on their way of life. “It’s never been substantiated at all. Nobody who knows these people could possibly believe that,” he said. 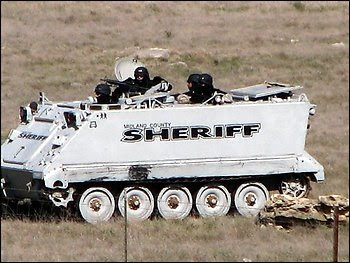 This photo taken Thursday, April 3, 2008 by an unidentified member of the Fundamentalist Church of Jesus Christ of Latter Day Saints and released Tuesday, April 15, 2008 by church attorney Rod Parker, the spokesperson for members of the FLDS, shows an armored personnel carrier on property neighboring the Yearning For Zion ranch near Eldorado, Texas. Photos of a state raid on a West Texas polygamist sect show law enforcement officers, looking for a teenage girl and evidence of sexual abuse, came prepared for an armed confrontation. (AP Photo/Fundamentalist Church of Jesus Christ of Latter Day Saints)

Parker said that if there was any suggeston that the FLDS would respond to police with violence, there would have been a cache of firearms found during the raid. “Instead they responded by singing and praying,” he said.

While there were hunting rifles at the ranch, search warrants filed in district court in Tom Green County don’t show that police seized any weapons.

Eldorado is about 200 miles southeast of Waco, where federal authorities tried to arrest Branch Davidian leader David Koresh for stockpiling guns and explosives in 1993. Four federal agents and six members of Koresh’s sect died in the shootout that ensued. After a 51-day standoff, Koresh and nearly 80 followers died in an inferno that the government says was set by the Davidians but that survivors say started when authorities fired tear gas rounds into their compound.

Law enforcement surrounded the FLDS ranch April 3, carrying a warrant seeking a 16-year-old girl who claimed she was trapped inside the church retreat and had been beaten and raped by her husband. The search also revealed that a soaring white limestone temple at the ranch held a bed where officials believe underage girls were required to consummate their spiritual marriages to much older men.

More than 400 children – all of whom lived in the large, dormitory-style log homes – were seized in the raid on suspicion they were being sexually and physically abused. They are being held in the San Angelo Coliseum and are awaiting a massive court hearing Thursday that will begin to determine their fate.

FLDS members carefully documented the raid in notes, video and still pictures of police and child protection workers talking with families, but much of that material was seized when police executed one of two search warrants on the ranch, Parker said.

Read all of it here. / Associated Press / The Rag Blog

Mothers separated from their children after the police raid on a polygamist compound in West Texas have spoken out for the first time, denouncing the authorities in tear-filled accounts.

The interviews, with reporters invited to the compound, the Yearning for Zion ranch in Eldorado, Tex., about three hours northwest of San Antonio, made a powerful public relations salvo on Tuesday, two days before a court hearing in San Angelo, Tex.

The hearing may decide the custody of more than 400 children whom the state took into custody in the raid.

“I’m not going to just sit and wait,” said Monica, who like all the interviewees gave just a first name.

“I have to do something every day to let them know that I want my children back,” she said in a video on The Deseret News Web site in Salt Lake City.

Kathleen said she and the others were setting the record straight, that children in her community are not abused.

“The world has been so prejudiced against us,” Kathleen said in an interview with CNN posted on YouTube.com. “They have a false image.”

The Texas Department of Family and Protective Services, which has temporary custody of the children, responded on its Web site. Mothers from the fundamentalist sect, the statement said, “have been unable to protect these children from abuse.”

On Monday, the agency moved many of the children to the San Angelo Coliseum, separating older children from their mothers, most of whom returned to the compound, about 45 miles away.

“It was absolutely necessary,” the agency said. “Investigators will never learn the full truth as long as adults who encourage a code of silence are standing over these children’s shoulders.”

Read all of it here. New York Times / The Rag Blog