Turning Into the Main Actors of Our Present & Future 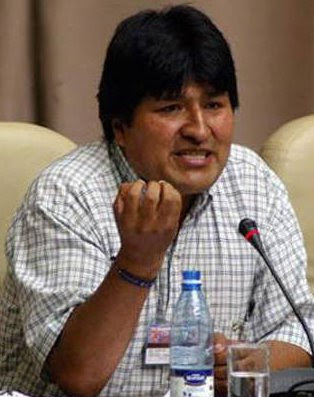 Bolivian President Evo Morales on the WTO’s Round of Negotiations
By Evo Morales Ayma / July 22, 2008

International trade can play a major role in the promotion of economic development and the alleviation of poverty. We recognize the need for all our peoples to benefit from the increased opportunities and welfare gains that the multilateral trading system generates. The majority of WTO members are developing countries. We seek to place their needs and interests at the heart of the Work Programme adopted in this Declaration. Doha World Trade Organization Ministerial Declaration, November 14, 2001

With these words began the WTO round of negotiations seven years ago. In reality, are economic development, the alleviation of poverty, the needs of all our peoples, the increased opportunities for developing countries at the center of the current negotiations at the WTO?

First I must say that if it were so, all 153 member countries and in particular, the wide majority of developing countries should be the main actors in the WTO negotiations. But what we are seeing is that a handful of 35 countries are invited by the Director-General to informal meetings so that they advance significantly in the negotiations and prepare the agreements of this WTO “Development Round”.

The WTO negotiations have turned into a fight by developed countries to open markets in developing countries to favor their big companies.

For countries like Bolivia the erosion of trade preferences due to the overall lowering of tariffs will have negative effects on the competitiveness of our exports.

The recognition of asymmetries, and the real and effective special and differential treatment in favor of developing countries is limited and obstructed when implemented by developed countries.

In the negotiations, there is a push towards the liberalization of new services sectors by countries when we should be definitely excluding basic services in education, health, water, energy and telecommunications from the text of the WTO’s General Agreement on Trade in Services. These services are human rights that cannot be objects of private commercial relations and of liberalization rules that lead to privatization.

The deregulation and privatization of financial services, among others, are the cause of the current global financial crisis. Further liberalization of services will not bring about more development, but greater probabilities for a crisis and speculation on vital matters such as food.

The intellectual property regime established by the WTO has most of all benefited transnational corporations that monopolize patents, thus making medicines and other vital products more expensive, promoting the privatization and commercialization of life itself, as evidenced by the various patents on plants, animals and even human genes.

The poorest countries will be the main losers. The economic projections of a potential WTO agreement, carried out even by the World Bank,[3] indicate that the cumulative costs of the loss in employment, the restrictions to national policymaking and the loss in tariff revenues will be greater than the “gains” from the “Development Round”.

After seven years, the WTO round is anchored in the past and out of date with the most important phenomena we are currently living: the food crisis, the energy crisis, climate change and the elimination of cultural diversity. The world is being led to believe that an agreement is needed to resolve the global agenda and this agreement does not correspond to that reality. Its bases are not appropriate to resist this new global agenda.

Studies by the FAO point out that with the current forces of agricultural production it is possible to feed 12 billion human beings, in other words, almost more than double the current world population. However, there is a food crisis because production is not geared towards the well-being of humans but towards the market, speculation and profitability of the big producers and marketers of food. To deal with the food crisis, it is necessary to strengthen family, peasant and community agriculture. Developing countries have to recover the right to regulate[4] our imports and exports to guarantee our populations’ food supply. We have to end consumerism, waste and luxuries. In the poorest part of the planet, millions of human beings die of hunger every year. In the richest part of the planet, millions of dollars are spent to combat obesity. We consume in excess, waste natural resources and we produce the waste that pollutes Mother Earth.

Countries should prioritize the consumption of what we produce locally. A product that travels half around the world to reach its destiny can be cheaper than other that is produced domestically, but, if we take into account the environmental costs of transporting that merchandise, the energy consumption and the quantity of carbon emissions that it generates, then we can reach the conclusion that it is healthier for the planet and for humanity to prioritize the consumption of what is produced locally.

Foreign trade must be a complement to local production. In no way can we favor foreign markets at the expense of national production.

Capitalism wants to make us all uniform so that we turn into mere consumers. For the North there is only one development model, theirs. The uniform models of economic development are accompanied by processes of generalized acculturation to impose on us one single culture, one single fashion, one single way of thinking and of seeing things. To destroy a culture, to threaten the identity of a people, is the greatest damage that can be done to humanity.

The respect and the peaceful and harmonic complementarity of the various cultures and economies is essential to save the planet, humanity and life.

For this to be in fact, a round of negotiations about development and anchored in the present and future of humanity and the planet it should:

-Guarantee the participation of developing countries in all WTO meetings, thus ending exclusive meetings in the “green room”.[5]

-Respect the interests of developing countries without limiting their capacity to define and implement national policies in agriculture, industry and services.

-Effectively reduce the protectionist measures and subsidies of developed countries.[6]

-Insure that the right of developing countries to protect their infant industries, for as long as necessary, in the same manner that industrialized countries did in the past.

-Guarantee the right of developing countries to regulate and define their policies in the services sector, explicitly excluding basic services from the General Agreement on Trade in Services of the WTO.

-Limit the monopolies of large corporations on intellectual property, foster the transfer of technology and prohibit the patenting of all forms of life.

-Guarantee the countries’ food sovereignty, eliminating any limitation to the ability of the States to regulate food exports and imports.

-Adopt measures that contribute to limit consumerism, the wasting of natural resources, the elimination of greenhouse gases and the creation of waste that harms Mother Earth.

In the 21st century, a “Development round” can no longer be about “free trade”, but it rather has to promote a kind of trade that contributes to the equilibrium between countries, regions and mother nature, establishing indicators that allow for an evaluation and correction of trade rules in terms of sustainable development.

We, the governments, have an enormous responsibility with our peoples. Agreements such as the ones in the WTO have to be widely known and debated by all citizens and not only by ministers, businessmen and “experts”. We, the peoples of the world, have to stop being passive victims of these negotiations and turn into main actors of our present and future.

[1] The 2008 Farm Bill was approved on May 22 by the US Congress. It authorizes spending that includes subsidies to agriculture of up to 307 billion dollars in 5 years. Of these, there will be approximately 208 billion dollars that can be spent on food programs.
[2] The current text in Agriculture proposes the reduction of US subsidies by a range between 13 and 16.4 billion dollars per year. However, the real subsidies that will actually apply to the US are of approximately 7 billion dollars per year. On the other hand, the European Union is offering in the WTO negotiations the reform it carried out in 2003 to its Common Agricultural Policy (CAP), without proposing further opening.
[3] Developing countries have little to gain in the WTO Round: the projected gains are of 0.2% for these countries, the reduction in world poverty is of 2.5 million (less than 1% of the world’s poor) and the losses due to forgone tariff revenues will be of at least 63 billion dollars. (Anderson, Martin, and van der Mensbrugghe, “Market and Welfare Implications of Doha Reform Scenarios,” in Agricultural Trade Reform and the Doha Development Agenda, Anderson and Martin, World Bank in Back to the Drawing Board: No Basis for Concluding the Doha Round of Negotiations” by Kevin P. Gallagher and Timothy A. Wise, RIS Policy Brief #36).
[4] This regulation must include the right to implement taxes on exports, to lower tariffs to favor imports, ban exports, subsidize domestic production, establish price bands, and in short, any measure that, given each developing country’s reality, better suits the purpose of guaranteeing the population’s food supply.
[5] The green room meetings is the name of the informal negotiation meetings at the WTO in which a group of 35 countries selected by the Director-General participates.
[6] A real cut in agricultural subsidies in the US would have to reduce them to less than 7 billion dollars per year.

This entry was posted in RagBlog and tagged Capitalism, Globalization, Latin America. Bookmark the permalink.