Two For The Road : Heading For The Exit Lane 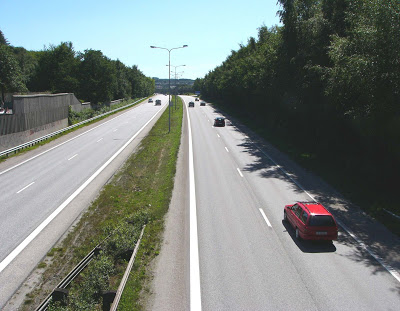 We stand at a turning point for US transport.

Real gasoline prices have already surpassed the peak levels that followed the second OPEC oil shocks, and even when adjusted for potential fuel efficiency improvements, have increased to the point where they will dramatically change driving behaviour in America.

The some 57 million Americans who own a car and have direct access to public transportation will start to act more and more like Europeans, who have long paid much higher gasoline prices. By 2012, average miles driven will have shrunk by more than 15%. SUV and other light truck sales, which until 2006 accounted for almost 60% of total motor vehicles, will plummet to less than half that level, reversing the last fifteen years growth in market share.

More fundamentally, the freeways are about to get less congested. Not only will the number of vehicle registrations in the United States not grow over the next four years, but by 2012 there should be roughly 10 million fewer vehicles on the road in America than thereare today.

Recent announcements from OPEC and China won’t be sufficient to hold oil prices in check. The additional 200,000 barrels per day pledged from Saudi Arabia is apittance compared to the four million barrels per day that depletion will hive off world production this year. What little increase in production Saudi is capable of will probably all be gobbled up by that country’s own voracious appetite for energy. Nor is the $145 per tonne cut (48 cents per gallon) in Chinese fuel subsidies likely to dent demand much.

Most North Americans would gladly line up at the pumps for China’s now $3.25 a gallon gas, particularly those of us who live north of the border.

With half of the world’s population never having to pay world oil prices, it shouldn’t come as a great surprise that $130 per barrel crude prices have yet to quash world demand. And the only supply response to date has been yet another round of cost overruns and lengthy project delays running the gamut from Canadian oil sands to deepwater Gulf of Mexico wells.

Higher oil prices spell stagflation for the US economy next year, and we have marked down our GDP growth forecast to barely over 1% for 2009 (pages 9-11). The biggest impacts will be in transport and none greater than the adjustments on the road.

After all, America is the quintessential land of the car.

As gasoline prices climb inexorably, American driving habits are going to have to undergo a massive change, mimicking the driving habits long adopted by Europeans who have faced much higher gas prices. Average miles driven will likely fall by as much as 15%, while the market share of light trucks, SUVs and vans will be literally halved, reversing the trend of the last fifteen years. But the most fundamental, and unprecedented change will be in the number of vehicles on the road.

Over the next four years, we are likely to witness the greatest mass exodus of vehicles off America’s highways in history. By 2012, there should be some 10 million fewer are today—a decline that dwarfs all previous adjustments including those during the two OPEC oil shocks (see pages 4-8). Many of those in the exit lane will be low income Americans from households earning less than $25,000 per year.

Incredibly, over 10 million of those American households own more than one car.

Soon they won’t own any.

This entry was posted in RagBlog and tagged Automobiles, Economy, Energy, Fuel Costs. Bookmark the permalink.