Two For the Road : Killing Off the Small Town 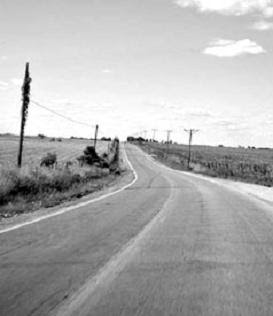 LEETON, Missouri – In this small town south of Warrensburg, directions usually begin with, “From Casey’s, you go …”

That would be Casey’s General Store, the only gas station in town. It’s where folks fill up while talking about goings-on, politics, weather and who’s got the best-looking tomatoes.

These days, they’re also cussing and shaking their heads about the price of that gasoline. People are doing that everywhere, but in small towns such as Leeton, population 619, it’s even more of a gut punch because nearly every working adult commutes to jobs elsewhere.

These days, there had better be a really good job on the other end of that trip.

Don Campbell’s daily commute to Kansas City – about 100 miles each way – costs him roughly $866 a month at $3.90 per gallon. But he’s a union iron worker and says he can make the math work.

Most of his neighbors can’t. For them and thousands of other small-town residents across the country who drive long distances to jobs that pay little more than minimum wage, the high cost of gas is making that daily commute cost-prohibitive.

So much so that economists predict that over the next few years, the country could see a migration that would greatly reduce the population of Small Town America – resulting in a painful shift away from lifestyle, family roots, traditions and school ties.

“This town’s the only place I know,” said Louie Rector, who drives 35 miles to his job at a window factory from his home in tiny Dixon, Mo., about 20 miles west of Rolla.

“I grew up here … raised my kids here. I got my family and friends all here. I don’t want to pack up and leave. But it’s getting to the point where a fella can’t afford to drive to work, and that don’t seem right to me.”

Towns such as Dixon and Leeton are everywhere in America. Many don’t have much beyond a post office, a grocery and maybe a school. Economists use Wymore, Neb., as an example in that 68 percent of working adults in town commute to jobs elsewhere, most to Beatrice, Neb.

The expected exodus from small towns, said Don Macke, a widely considered authority on rural economics and head of the Center for Rural Entrepreneurship in Lincoln, Neb., will be far more profound than the gradual erosion that has been going on since World War II. That decline was due to the country’s shift away from an agrarian economy and a choice for convenience: People wanted to be closer to jobs, shopping and entertainment.

The new flight, Macke thinks, will be more out of necessity.

Most commuters from small towns are high school graduates. They are driving 50 miles or more to work as school cooks, hospital aides, office workers, dental assistants and unskilled factory workers.

“The reality is that those jobs don’t pay all that well,” said Macke, who is also a visiting scholar with the Rural Policy Research Institute at the University of Missouri. “They’re spending up to $500 a month on gas. A third to half is already technically working poor.

“And as gas goes higher, they will get poorer and these towns will soon struggle to hold on to these people.”

David McGranahan, a senior economist with the Economic Research Service of the U.S. Department of Agriculture, added that the decline would not be entirely longtime residents moving away.

“Young people who leave these towns to go off to college or the military may decide not to go back – as many have always done in years past,” McGranahan said. “Also, fewer people will leave the city to move to small towns in search of a quiet life.”

But nobody is writing off small towns. Who knows what type of vehicle will come along next? There’s carpooling. Computer technology increasingly allows people to work from home. And some communities are working on ways to provide jobs in town.

“I have a lot of faith in ingenuity and the entrepreneurial spirit,” Macke said.

That rescue better happen fast, said Leeton Mayor Larry Mudd. He has lived all his 62 years there and used to commute to Kansas City to work as a school administrator – back when gas was cheap.

He hears the talk around town and he expects to see people, particularly young families, move away.

“People are mad as hell, but they don’t know who to blame,” Mudd said. “I know we got people here who are buying gas instead of paying bills.

“What a lot of towns are going to end up with is a bunch of empty buildings and empty houses.”

Since the advent of the automobile in the early 20th century, the American rural landscape has been one of spacious land and cheap fuel.

It was commonplace for people to drive long distances for jobs. In isolated areas, such as western Kansas, the drive could be 100 miles or more. Those commuters may have complained about the time in the car, but seldom about the price of gas.

Throughout that period, too, many towns had a factory, and mom-and-pop stores lined main streets.

That has all changed.

Factories in many towns closed years ago as small companies folded or manufacturers sent jobs overseas. Mom-and-pop stores gave way to Wal-Marts in bigger towns. When those changes occurred, jobs and shopping required trips out of town.

And now, gas prices are at all-time highs.

Brian Dabson, co-director of the Truman School of Public Affairs at the University of Missouri, said the new financial reality has changed the parameters of “rural poor.”

The term used to apply mainly to pockets of poverty in Appalachia, the Mississippi Delta, Indian reservations, and the Texas-Mexico border area.

There is little public transportation in these rural areas. And there is less pubic assistance today. Farmers make more money from corn because of its use to make ethanol, but towns aren’t sharing in any windfall because the cost of farming has gone up, too, and there are fewer farmers.

No question that gas prices will chase some people closer to urban areas, Dabson predicted.

“There is no hiding place from global pressure,” he said.

So why isn’t the same thing happening in Europe, where gas prices are even higher?

Because trains connect almost every town there, Macke said. And yes, some people in urban and suburban areas in this country drive 30 miles to work, too, but they tend to be more affluent.

It is in rural America where lives are being turned upside down.

“This country had not planned on a big jump in fuel costs,” Macke said.

The classic song was seemingly written for guys like Rector of Dixon. He never figured he would ever leave his hometown on the edge of the Mark Twain National Forest.

According to Dixon’s marshal, Clifty Yoakum, most every working adult leaves town each morning for jobs in other places, such as Rolla or Jefferson City.

For 29 years, Rector has driven to the Quaker Window factory in Freeburg, 35 miles to the north. The factory is unusual in that it has more employees than that town has people.

“We got about 450 workers and they come from all over, probably six or seven counties,” said owner Mike Knoll. “We pay $8 to $10 an hour – better than minimum wage – but I know my people are really feeling the gas crunch.”

He recently ordered a switch to four 10-hour days to save his employees a day’s drive.

“That’s one day we don’t have to pay $20 for gas,” said Rector’s daughter, Tracy, who also works at Quaker.

“Everybody is feeling what’s going on. They’re cutting back at the grocery store, not going out to eat. But even with that, when you get your check there’s nothing left. Gas goes much higher – people are going to stop going to work.”

Her father may leave Dixon and move closer to Freeburg, but Tracy Rector isn’t yet ready to commit to such a drastic move from her hometown.

Back in Leeton, school Superintendent William Nicely knows he could see a drop in enrollment if families leave. It’s a highly accredited school and this year graduated 19 seniors.

But he knows why it would happen because he commutes the other way.

“I live in Sedalia and drive here every day – I know what families are going through,” Nicely said.

Resident Jerry King doesn’t have to worry about it. He’s retired. He used to work at a tire shop in Sedalia.

“I wouldn’t want to be making that trip these days, not with gas where it is,” King said. “Heck, I don’t even want to drive to Windsor for groceries.”

Mudd, the mayor, worries that younger residents will start thinking the same way.

“When people move away, towns lose their tax base,” Mudd said. “Then you can’t fix streets … you can’t do much of anything. That makes even more people leave.

“Pretty soon, won’t be much left in these old towns.”

1 Response to Two For the Road : Killing Off the Small Town