Wanted : Dialogue on the Great Depression of 2009 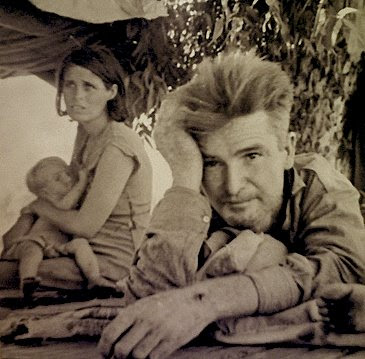 How prepared are Americans today to cope, adjust, improvise, and to help one another as things really get tough in the coming year or two? Could really bad times that go on and on bring about a forced reset of the American psyche?

What happens after the last strains of Auld Lang Syne fade away on New Year’s Eve, and the glow of the historic inauguration of Barack Obama on January 20th quickly dims? By then, the deep economic mess we face should really start to sink in across America.

Those of us in our Golden Years may see things coming that those of more recent generations can’t even imagine. Its really a matter of what our parents knew about the great depression in the 1930’s and what they taught us when we were young. But if you were born in 1970, by the time you were old enough to remember daily life, things would have probably seemed fine. Your parents grew up when America was taking deep swigs of the new good life and opportunity after WWII. My folks were little kids when the 1929 crash happened. They grew up in the depth of the depression and did without. So, I got stern warnings about spending and saving money. Warnings that 40-somethings today probably didn’t get. And 40-somethings certainly didn’t see thrift and restraint reflected in the America of their youth.

How prepared are Americans today to cope, adjust, improvise, and to help one another as things really get tough in the coming year or two? Could really bad times that go on and on bring about a forced reset of the American psyche? A sea-change in leadership is coming, but a new Obama administration will begin work in the midst of global recession. Our new leaders will inherit record-setting national debt, and the diplomatic debris and great political uncertainty left by Bush and company. Massive government stimulus and work programs will be part of the long term solution but individual responsibility for daily survival will be key on the community level.

Compared to the more than ten years of misery, loss, unemployment, hunger and grinding uncertainty following the crash of 1929, we are a much stronger nation today. But the ability of average Americans to make do and to do without will be an unfolding saga. Will the new jobless again be forced to depend upon soup-kitchens and handouts to survive? Can we even imagine that? Millions, who for decades have been spending money they do not have, using a wallet full of credit cards to get whatever they want, will be forced to take a hard look at themselves. A pay-as-you-go world is a great social leveling force.

I would like to see an exchange of ideas about what you see coming on the basic person to person level. Post a comment and let’s hear your thoughts and observations. Hardship can also create positive changes. Will humbling loss and poverty merely increase crimes like shoplifting and burglaries or will it bring out a renewed American strength and pride? What role will the internet and wireless communication make as times get really tough?

Let’s start by exchanging ideas and talking to one another early on.

3 Responses to Wanted : Dialogue on the Great Depression of 2009