World Hunger Spiralling Out of Control Because of Capitalist Profit System 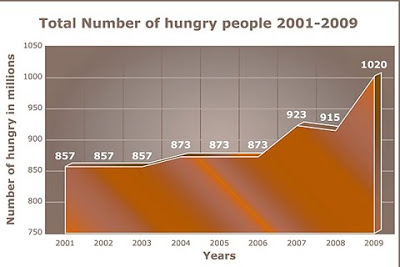 For the first time in history, more than one billion people, or nearly one in every 6 inhabitants of the planet, are going hungry this year, according to a new report from the United Nations’ World Food Program (WFP). Chronic poverty, still high food prices and the impact of the world economic crisis have led to a sharp increase in the number of hungry people, now larger than the combined populations of the United States, Canada and the European Union.

The total number of hungry people has shot up by nearly 200 million over the last decade. After a small decline between 2007 and 2008, world hunger rose sharply as the impact of the economic crisis hit, rising from 915 million in 2008 to an estimated 1.02 billion this year. [See graph]

While disasters, such as floods or droughts, cause temporary food shortages, these emergencies accounted for only 8 percent of the world’s hungry population, the WFP said. Nor is the problem caused by a shortage of food production, which at current levels is sufficient to feed the world’s population.

The source of the catastrophe is the capitalist profit system and, in particular, the continued oppression of the poorest countries in sub-Saharan Africa and Asia. Sixty-five percent of the world’s hungry people live in just six countries: India, China, the Democratic Republic of Congo, Bangladesh, Indonesia, Pakistan and Ethiopia.

The various IMF-dictated “development” programs imposed on these countries have chiefly benefited the banks in London, New York and Tokyo—which have sucked out hundreds of billions in interest payments—as well as the native ruling elites. Falling commodity prices for raw materials have also reduced revenues, while speculation on food has also driven up costs.

According to an article on the WFP report on Livescience.com, aid programs had made certain inroads in fighting hunger at the end of the 20th century. However, rising food prices have all but negated those efforts, causing the number of hungry to rise again everywhere except in Latin America and the Caribbean. The rising cost of food caused the number of hungry to jump by 75 million in 2007 and 40 million in 2008.

“The double whammy of the financial crisis and the still record high food prices around the world is delivering a devastating blow to the world’s most vulnerable,” WFP Executive Director Josette Sheeran told a London press conference Wednesday. “They have been squeezed so much that many have lost what few assets they owned, further exposing them to hunger. Now, it only takes a drought or storm to provoke a disaster.”

The present crisis also underscores the criminal misallocation of financial resources by governments around the world. Sheeren noted that the $3 billion the agency needed to cover its budget shortfall and continue providing food to 108 million people around the world was less than 0.01 percent—or one-hundredth of one percent—the amount spent by world governments on the bailout of the banks and other financial institutions.

While hunger has reached record levels, she said, food aid has fallen to a 20-year low. The WFP said it would have to drastically cut food aid by October because it had only raised less than half of its $6.7 billion budget.

In Kenya, where drought and high food prices have pushed nearly 4 million people into hunger, the WFP said it was preparing to reduce rations.

In Guatemala, its program to provide food supplements to 100,000 children and 50,000 pregnant and lactating women was “hanging by a thread.” Almost half of the children in the Central American country are chronically malnourished—the sixth highest level in the world—and the government has recently declared a “State of National Calamity” due to a shortage of food to feed hungry rural communities.

The WFP reported these stark statistics:

A host of irreversible physical ailments can be caused by undernourishment—the insufficient intake of calories to meet minimum physiological needs—and malnutrition—the lack of sufficient levels of proteins, vitamins and other nutrients.

The most common form of malnutrition is iron deficiency, Livescience.com noted, which affects billions worldwide and can impede brain development. Vitamin A deficiency affects 140 million preschool children in 118 countries and is the leading cause of child blindness. It also kills one million infants a year, according to UNICEF.

Iodine deficiency affects 780 million people worldwide. Babies born to iodine deficient mothers can have mental impairments, the web site noted. Zinc deficiency results in the deaths of about 800,000 children each year and weakens the immune system of young children.

The desperation facing millions produced tragedy Monday when a stampede of people seeking free food in the southern Pakistan port city of Karachi left up to 20 impoverished women and children dead. Officials said they were crushed in a stairwell and alley, as hundreds lined up to get free flour from charity workers.

Police and other witnesses told the Agence France-Presse (AFP) that a private security guard in charge of making sure the women stayed in line charged them with a baton when they became impatient with the long wait. An injured woman, Salma Qadir, 40, said the women wanted to get their rations quickly but were beaten by the guard. “The women got scared and tried to turn back, which scared others and resulted in a stampede,” she told the AFP.

The narrow streets of the market area were reportedly teeming with hundreds of poor people seeking scarce wheat and sugar. Poverty levels in the city of 14 million people have been on the rise along with food prices, which government officials blame on hoarding by mills and large wholesalers. The BBC reported that Pakistan’s government had recently ordered a crackdown against such hoarding, “[b]ut this failed to materialize thus far due to the lobby’s massive influence in Pakistan’s parliament.”

According to the World Food Program, 85 percent of the South Asian country’s 173 million people live on less than US$2 a day. Hunger in the country has been exacerbated by world financial breakdown, skyrocketing food prices and the US-backed war in Pakistan’s North West Frontier Province and tribal areas, which has driven millions from their homes. Currently the WFP is trying to provide daily food rations to 100,000 displaced people in the war-torn area.

This entry was posted in RagBlog and tagged Humanitarian Aid, Hunger, The World. Bookmark the permalink.