Alan Waldman :
‘Cold Feet’ was engaging British dramedy about the triumphs and tribulations of three couples

In only five seasons the show garnered numerous awards and nominations, and the cast went on to many other fine TV achievements. 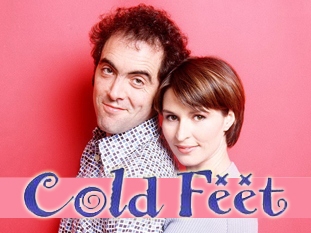 Cold Feet is a well-written, -directed, -produced, and -acted comedy-drama that significantly changed the topics British entertainment programs could deal with, although it engendered a lot of angry mail while doing so.

This intelligent, warm, funny and at other times heartbreaking, sometimes weird yet deep-down realistic piece of quality comedy-drama follows the intertwining lives of three Manchester couples at different stages in their relationships.

Numerous other characters interact with this sextet over the course of the series. Poignantly true to life, but with fantastical twists, the drama/sitcom explores all the ups and downs of romance.

In 1998, Meg Carter wrote in Britain’s The Independent, “Granada Television has finally produced a modern show that mines the rich seam of a generation that is as confused as it is liberated by increased choice and freedom, and that caters for an audience which has not, traditionally, watched very much ITV.” 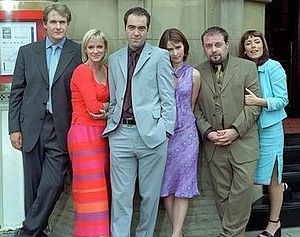 Some have called this a British version of Friends. Mike Bullen created it, wrote 29 episodes, and performed in five Hitchcockian cameos.

In the United States, Cold Feet was first broadcast on Bravo, which bought the pilot and first three series for $1 million. From 2005 on the series aired on BBC America.

The show was a critical and ratings success for ITV, which has struggled to recapture Cold Feet‘s kind of audience since the series ended. Critics analyzed the depiction of social issues, the use of popular music, and the relevance of the series to contemporary audiences.

It has been broadcast in more than 34 countries and has been remade for local audiences in the United States and European countries. The series also spawned merchandise, including soundtracks, DVDs, and spin-off books.

NBC aired an American knockoff in 1999, but it earned the network its worst-ever rating for an original Friday night show, and it died after a month. Like a knife in my heart, it had replaced the brilliant series Homicide (which a top NBC exec explained to me was becoming too expensive to produce after the 100 episodes necessary for lucrative syndication had been achieved). With typical English understatement, one of the major British cast members called the American rip-off of Cold Feet “utter shit.”

The Brit cast is really terrific in this series, and in recent years I have enjoyed them all in fine TV series and films, many of which I have previously reviewed here.

Helen Baxendale won the 1998 Broadcasting Press Guild Best Actress award and was nominated for Scottish acting BAFTAS for Truth or Dare and Cardiac Arrest. John Thomson has 97 film and TV credits and was wonderful in the fun series New Street Law.

Fay Ripley was delicious as Martin Clunes’ wife in Reggie Perrin. She was also a witty, fun guest on The Kumars at No. 42.  Robert Bathhurst performed in Downton Abbey and the Woody Allen film Scoop. And Hermione Norris was in the brilliant spy series MI-5.