James Nesbitt stars as a Northern Irishman whose daughter has been murdered by the IRA and who goes undercover to fight myriad dangerous criminals. 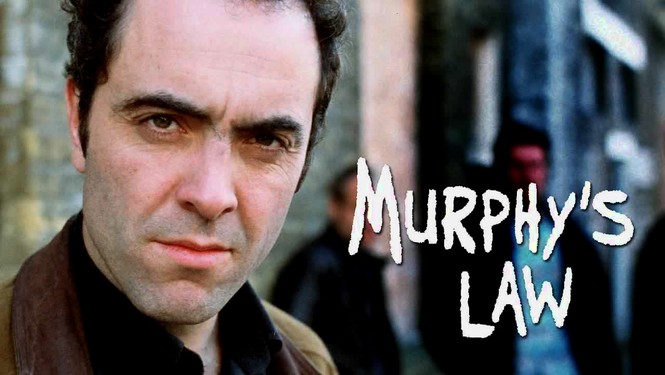 From 2001 to 2007, five series and 19 episodes of it aired. All are on Netflix, and many can be seen for free on YouTube. Here is one.  In this excellent three-part episode and some others, I must warn that it’s a bit difficult to decipher Irish and English accents and slang. For instance, a character says “It went tits.” That means badly, as “tits up” (like a dead person). Nonetheless, Murphy’s Law is so exciting and well done that I believe it’s worthwhile to cope with this occasional inconvenience.

Creator and writer of 12 episodes is Colin Bateman, who won a Best Screenplay award for Divorcing Jack and who wrote an episode of the outstanding Scottish series Rebus, which I have previously recommended here. Five of the episodes were written by Allan Cubitt, who won an Edgar for Prime Suspect, earned three other award noms, and was also writer/exec prod on The Fall.

James Nesbitt has eight award wins and 13 noms for works including Cold Feet, Bloody Sunday, Waking Ned Devine, and Jekyll. Has appeared in 66 films and TV series, including The Hobbit trilogy, Touching Evil and Ballykissangel.

The show was nominated for a 2008 “Best Drama Serial” award. At the 2007 Irish Film and Television awards, Nesbitt won “Best Lead Actor,” the program was nominated as “Best Drama Series and Liam Cunningham (five awards and six other noms) got a nom as “Best TV Supporting Actor.” On imdb.com, more than 90.8%of viewers gave Murphy’s Law thumbs up, and 25.8% rated it a perfect 10. It appealed to all demographics, but most to women 18-29.

Murphy is an uncompromising, sometimes tough-talking London cop who risks his life weekly and often finds himself in unfamiliar places, including a prison, a biotech lab, and a convent.