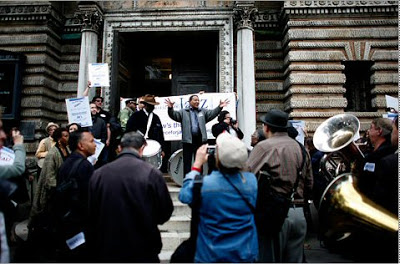 More than 100 musicians and supporters of “Jazz for Justice Artists!” turned out for a rally that began at the Judson Memorial Church in Greenwich Village. Photo: Kirsten Luce/New York Times
After years filled with jazz, struggling in retirement
By Emily S. Rueb / September 30, 2009

It was an unusual sight to see at a union rally, especially one in New York City: a processional of musicians, some wearing Mardi Gras beads, parading down West 4th Street on Tuesday afternoon, riffing on impromptu tunes and better-known anthems like “When the Saints Go Marching In.”

Despite the festive mood, however, the reason for the gathering of jazz musicians and officials of the union that represents them, Local 802, was the fact that many of the union’s jazz artists are struggling to support themselves in retirement. By organizing the event and the “Justice for JazzArtists!” movement, which has also been getting its message out with this video, the union is hoping to organize musicians and the venues where they play to assist them later in life.

“It’s about respect,” said Paul Molloy, a union spokesperson. “Regrettably, at the end of their lives they have very little to show for it.”

The story of the union and its efforts to maintain a robust retirement fund is long and complex, especially in recent years. It was organized in 1921 to provide benefits and collective bargaining power to musicians. It represents about 8,700 members in and around New York City, including Broadway musicians, orchestral musicians, recording artists, teaching artists, instrumentalists and a number of singers. Roughly one third are jazz musicians.

In the 1960s, legislation diverted tax revenues from admissions to Broadway, opera, ballet and concert performances to health benefits and the American Federation of Musicians pension fund, the latter of which now amounts to a $2 billion fund from which participating musicians can draw in retirement.

In 2006, Local 802 sought to include smaller venues, like jazz clubs, in the pension fund. It lobbied the state legislature to forgive the 8.375 percent sales tax for ticket sales at the door, with the hope that club owners would still collect the tax dollar amount and contribute it to the American Federation of Musicians pension fund. Gov. George E. Pataki signed the measure into law in 2007, but, according to Mr. Molloy, no one stepped up to organize contributions. While it’s hard to calculate how much money has been lost, the union estimates that a busy club charging 150 people a night a $30 cover charge can collect roughly $40,000 to 50,000 a week.

Some venues, like the New School for Jazz and Contemporary Music and Lincoln Center Jazz, participate in the pension plan, but many others operate with informal accounting and use cash-only transactions that make it easier to avoid passing on the savings. The overall goal of the protest was to get employers, including the clubs, to avoid this temptation and contribute.

More than 100 musicians and supporters turned out on Tuesday. One sat in the back row wearing a black Broadway Unions United T-shirt, a tuba in his lap. The rally began at the Judson Memorial Church in Greenwich Village and was led by Bob Cranshaw, the 76-year-old bass guitarist who has collaborated with the likes of Ella Fitzgerald, Thelonious Monk and Wayne Shorter.

The trumpeter Jimmy Owens recalled 1987, when Congress declared jazz a national treasure. He asked what’s become of that protection.

Councilman Alan J. Gerson stood up in front of the crowd and avowed his commitment to use the power of legislation, if necessary, to force the club owners to support their former employees. “Our government has a responsibility to ensure a place for art,” he said. “We want to encourage them,” he said about club owners. “But if they don’t do it voluntarily, then we need to make it mandatory.”

After several speeches accompanied by several soulful “mmmhmm”s and loud, exuberant applause, the attending musicians, many of whom had brought the tools of their trade, stood up and proceeded out down the stairs and onto the steps of a church facing Washington Square Park. They picked up ready-made signs scrawled with pithy summaries of Local 802’s demands and their instruments and paraded loudly to the Blue Note, one of the city’s most famous jazz clubs.

Many passers-by stopped and stared. One woman inside a building rushed to the window with an expression of surprise, then laughter.

When the procession reached the front of the club, Bill Dennison, a vice president of the musicians union, brought forward a petition as thick as a cereal box signed by more than 2,000 professional musicians that forcefully asked management to change its ways. The doors to the Blue Note did not open all the way. There was no dialogue. Mr. Dennison handed the stack of papers to a worker at the door, politely waved and thanked the representative and rejoined the crew outside.

At the rally, Craig Haynes, the son of the drummer Roy Haynes and a drummer himself who recently picked up the alto saxophone after a hiatus, said he does “a little bit of everything” to cobble together an income that supports his life in Queens. In addition to teaching and playing in schools, hospitals and churches, he also dresses up as an action hero and plays the saxophone outside Yankee Stadium. (He declined to identify which action hero as he wants to protect his anonymity). On a good night, he said, he can pull in $150.

“I have friends who make one million dollars a year,” he said. But most musicians, he said, work two to three times a week at $75 per night. “You might only make $5,000 a year.”

Also at the rally was Dick Griffin, a trombonist who said he felt lucky to have the cushion of Social Security from the federal government and a New York City pension, something he earned teaching music in public schools for 14 years. At 69 years old, he draws $172 a month from the musicians’ pension fund, the same amount that he’s been getting since he turned 55.

“I would be in bad shape,” he said, if he didn’t have access to the additional monthly support. “I couldn’t even buy subway fare.”

This entry was posted in RagBlog and tagged Economy, Jazz, Music. Bookmark the permalink.