Just as a parasitical lancet fluke can direct an ant to climb up a blade of grass, we are unknowingly manipulated by cultural memes. 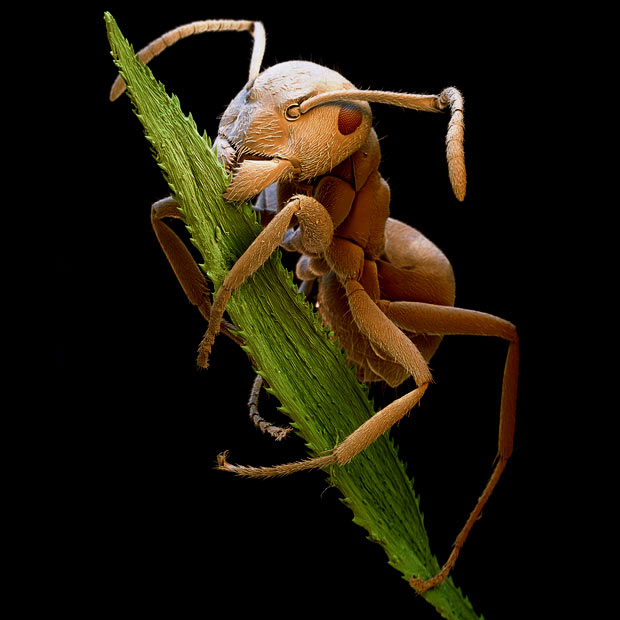 Ant on leaf of grass. Free will or “fluke” of nature? Image from The Telegraph.

What if your brain were taken over by a parasite and made you want something you would not ordinarily want? What if it took over your second-order thinking and made you want to want that thing? Would your will then be free?

This is not so far-fetched a scenario as it might seem. There are numerous examples of parasites infecting the brains of animals to make those animals act contrary to their own well-being. Here is one:

The Lancet liver fluke Dicrocoelium dendriticum has a very busy life. As an adult it spends its time in the liver of a cow or another grazing mammal. Here it mates and lays eggs, which are excreted in the host’s feces.

A snail eats the poo, taking in the eggs at the same time. The eggs hatch in the snail and make their way into its digestive gland, where they asexually reproduce. They then travel to the surface of the snail’s body. As a defensive maneuver, the snail walls the parasites up in cysts and coughs up the balls of slime…doing exactly what the parasites wanted it to do.

An ant comes along and gobbles up the fluke-laded slime balls. The flukes then spread out inside of the ant, with a couple of them setting up shop in the insect’s head. When night approaches, the flukes take control. They make the ant climb up a blade of grass and hold tight, waiting to be eaten by a grazing animal. If the ant is still alive at dawn, the flukes release their control and the ant goes about its day like normal (if the ant baked in the sun, the parasite would die, too). At night the flukes take over again and the cycle repeats until the ant becomes cattle food.(1)

It’s doubtful, of course, that the lancet fluke actually wants its host to do anything.

It’s doubtful, of course, that the lancet fluke actually wants its host to do anything. That is just a figure of speech. But what is clear is that the ant’s climbing up the blade of grass has nothing to do with its own survival and well-being. Its mind, tiny as it is, has been hijacked by the parasite. If it had enough mentality to reflect on what it is doing, the ant could probably find plausible and compelling reasons for its actions. Perhaps it feels good to climb. Perhaps hanging out at the top of the blade of grass feels tranquil and comfortable. Or exhilarating. We’ll never know. But we can find out find how it feels in our own case, because we too are subject to parasitic hijacking.

Daniel Dennett makes the point that certain memes have the same effect on humans that the lancet fluke has on ants. A meme is a unit of cultural transmission, similar to the gene, which is a unit of biological evolution. Like a gene, a meme is a replicator, except memes replicate contemporaneously between minds rather than historically between bodies.(2) A meme is an idea or information packet that replicates itself by passing from mind to mind. Says Dennett,

It’s ideas — not worms — that hijack our brains. … There are a lot of ideas to die for. Freedom. … Justice. Truth. Communism. Many people have laid down their lives for communism, and many have laid down their lives for capitalism. And many for Catholicism. And many for Islam. These are just a few of the ideas that are to die for. They’re infectious.(3)

Such hijacking might be innocuous and unintended, the product of cultural memetic replication like a catchy tune, or it might be quite deliberate, as in brainwashing or propaganda. For example, here are a few memes that may have been installed in you or someone you know.

Our beliefs can induce us to act contrary to our own well-being.

And so on. You can probably think of more. In all these cases, our beliefs can induce us to act contrary to our own well-being (and to our genetic fitness as well, but that is not usually our concern).

But regardless of the effect on our own well-being, when we are so induced we seem to act as we do voluntarily, of our own free will. And yet, something else — our parents, our community, our culture, the information media we are exposed to, the government, the dominant economic class, etc. — determines our will, i.e. what we want, choose, and strive for. And furthermore, that something determines our second-order will as well, what we want to want.

But what if somebody else controls our second-order will?

But what if somebody else controls our second-order will? Such a thing is quite possible through brainwashing, application of propaganda, and also operant conditioning and behavioral engineering as depicted in the novel Walden Two.

When we find out that we have been manipulated we typically feel outraged. Take the fictional account of the fantasy world of Harry Potter. In that world one of the unforgiveable curses is Imperius, by which the witch or wizard controls the victim’s will. It is unforgiveable because it violates one of the most central aspects of our identity, the sense that we are in charge of our choices, and that our choices define (or reveal) who we are. Nobody wants to be a puppet.

(The other thing that is central to our identity is how we perceive reality, our own unique point of view. But our perception, seemingly more passive, is not quite so central. Were we to find out that someone had distorted our perceptions, we would feel anger at being lied to, but not, I suspect, outrage at being controlled.)

So is our will free when we are
covertly constrained?

So is our will free when we are covertly constrained? No, obviously not. Our choices and resulting actions are not ours, but our controller’s. But do we still have free will? In the sense of having the capacity for it, yes.

That capacity — whether or not it is actually exercised at any given time — is rooted in our capacity for reflective self-awareness, or second-order thinking. If your second-order will is determined by someone else, as soon as you know it you can take steps against it. Or for it, if you decide you like it that way. The point is, once you know someone is trying to control you, you have a choice about it. Second-order thinking is, potentially, self-correcting.

Now clearly it might not be so easy to find out. If your manipulator is sufficiently skilled, it might be very, very difficult indeed. You would feel no impulse to find out if you did not even suspect that you might be subject to manipulation.

That’s why philosophy is, in some ways, a subversive concern. Socrates famously asserted that the unexamined life is not worth living.(5) If we desire wisdom we are advised to examine our lives even if there appears to be nothing to be concerned about. A manipulator would not want you to do that, because you might discover the manipulation. Having discovered it, however, you would be better off, as you could then take steps to take back your will.

Eternal vigilance, it seems, is the price not only of political liberty(6) but of freedom of the will as well.