The Mubarak regime, supported financially and militarily by the United States, was accused of serious human rights violations, including extensive use of torture. 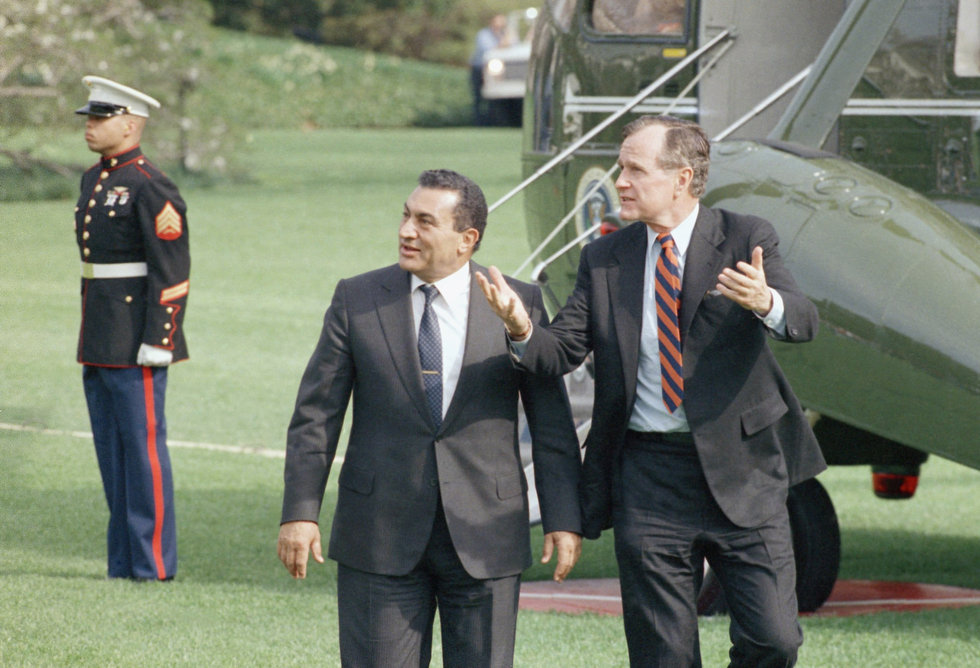 The only legal leftist opposition party which the Mubarak regime still allowed in 1990, al-Tagammu, “absorbed many radical Egyptians” who still believed “that significant change” in Egypt “can be accomplished only by assembling democrats, Marxists, Nasserists, and independents into a united force against the present regime,” as the 1990s began, according to Selma Botman’s The Rise of Egyptian Communism, 1939-1970.

Although the Egyptian government under Mubarak was legally represented in the United States in the early 1990s by the Washington, D.C., law firm — Patten, Boggs & Blow — of the now-deceased Ron Brown (later a Secretary of Commerce in the Clinton Administration), it continued to repress political dissidents in Egypt during the 1990s.

On February 7, 1991, during the early 1991 attack on Iraq by the first Bush administration, at least 11 Egyptian students at Air Shams University in Cairo were arrested for producing leaflets containing anti-war material. And on February 8, Dr. Mohammed Mandour, Head of Psychiatry at the Palestinian Red Crescent Society in Cairo and a member of the Board of Trustees of the Egyptian Organization for Human Rights, and Dr. Emad Atrees were arrested after making public statements in opposition to the first Gulf War.

Dr. Mandour was “reportedly tortured severely” by Mubarak regime security forces, according to the May 1991 issue of the UK-based Article 19 human rights organization magazine, Censorship News.

According to the same publication, “the EOHR recorded that Mohamad Abdel Fateh, a teacher and Sameh A. Said, a university student and EOHR members, were arrested and detained under a 15-day detention order, allegedly for possessing anti-war leaflets: and were “reported to have been tortured.” And on February 27, 1991 “the EOHR recorded that Hamdain Sabahi, journalist…was arrested allegedly for voicing his opposition to the [first Gulf war] at a student meeting, at Cairo University on February 24” and “was reportedly tortured.”

So, not surprisingly, the Human Rights Watch World Report 1992 summarized the human rights situation in Egypt under the Mubarak regime in the early 1990s in the following way:

One of the most noxious features of the system is the apparently pervasive use of torture in detention. According to the independent Egyptian Organization of Human Rights [EOHR] torture of suspected criminals in police lock-up is routine, while convincing evidence exists of the systematic use of torture against suspected political dissidents by the State Security Intelligence [SSI] force…

The inescapable impression gained is that President Mubarak prefers to retain the reserve powers in the state of emergency as a means of guarding against popular discontent with government policies — and protecting his own seat… In 1991, the leading women’s organization in the Arab world, the Cairo-based Arab Women’s Solidarity Association, was told by the government to close down…

In bilateral aid, Egypt is fiscal 1991 received an estimated 1.3 billion in military assistance…from the United States. Despite well-documented abuses in Egypt that are widespread, persistent and serious in nature, including torture, the [Bush I] Administration apparently does not consider aid to Egypt to be barred by Section 502B of the Foreign Assistance Act of 1961, as amended, which prohibits security assistance to any “country the government of which engages in a consistent pattern of gross violations of internationally recognized human rights’…

It was not until September 2005 that opposition political candidates were finally allowed to run against Mubarak in Egypt’s presidential elections. And, according to Jason Thompson’s A History of Egypt, “joint military exercises between Egypt and the United States have been ongoing since 1981” and “it is estimated that Egypt received more than $50 billion in U.S. aid between 1975 and 2004, and when indirect aid and non-governmental sources are factored in, the total is much higher.”