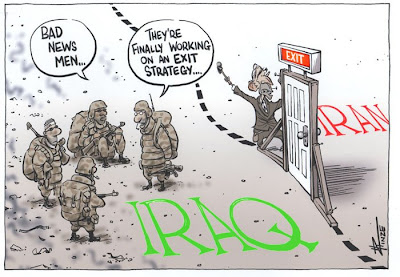 United States is drawing up plans to strike on Iranian insurgency camp
By Michael Smith / May 4, 2008

The US military is drawing up plans for a “surgical strike” against an insurgent training camp inside Iran if Republican Guards continue with attempts to destabilise Iraq, western intelligence sources said last week. One source said the Americans were growing increasingly angry at the involvement of the Guards’ special-operations Quds force inside Iraq, training Shi’ite militias and smuggling weapons into the country.

Despite a belligerent stance by Vice-President Dick Cheney, the administration has put plans for an attack on Iran’s nuclear facilities on the back burner since Robert Gates replaced Donald Rumsfeld as defence secretary in 2006, the sources said.

However, US commanders are increasingly concerned by Iranian interference in Iraq and are determined that recent successes by joint Iraqi and US forces in the southern port city of Basra should not be reversed by the Quds Force.

“If the situation in Basra goes back to what it was like before, America is likely to blame Iran and carry out a surgical strike on a militant training camp across the border in Khuzestan,” said one source, referring to a frontier province.

They acknowledged Iran was unlikely to cease involvement in Iraq and that, however limited a US attack might be, the fighting could escalate.

Although American defence chiefs are firmly opposed to any attack on Iranian nuclear facilities, they believe a raid on one of the camps training Shi’ite militiamen would deliver a powerful message to Tehran.

British officials believe the US military tends to overestimate the effect of the Iranian involvement in Iraq.

But they say there is little doubt that the Revolutionary Guard exercises significant influence over splinter groups of the radical cleric Moqtada al-Sadr’s Mahdi Army, who were the main targets of recent operations in Basra.

The CBS television network reported last week that plans were being drawn up for an attack on Iran, citing an officer who blamed the “increasingly hostile role” Iran was playing in Iraq.

The American news reports were unclear about the precise target of such an action and referred to Iran’s nuclear facilities as the likely objective.

According to the intelligence sources there will not be an attack on Iran’s nuclear capacity. “The Pentagon is not keen on that at all. If an attack happens it will be on a training camp to send a clear message to Iran not to interfere.”

President George W Bush is known to be determined that he should not hand over what he sees as “the Iran problem” to his successor. A limited attack on a training camp may give an impression of tough action, while at the same time being something that both Gates and the US commander in Iraq, General David Petraeus, could accept.