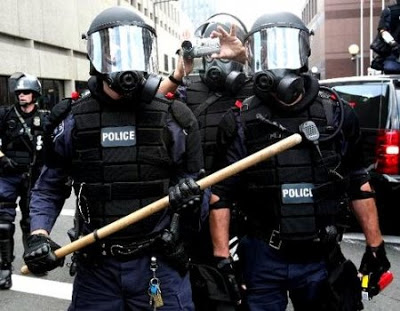 ‘I fear those individuals, identified only after they explode, who project their anxieties, anger and insecurities by becoming officers of the law and marauding under the protection of a badge.’

Brandon Darby represents more, much more, than just a disordered wannabe spy, snitch, or informant. Darby was attracted to the magnet that America’s local police, sheriff’s offices and even federal agents still purposefully drag around the edges of peaceful protest. A crude “intelligence” effort that tramples constitutional directives and generally attracts the disaffected, unreliable and duplicitous.

That riot police, expensively outfitted in custom made gear designed more for confrontation than personal protection, can become a mob themselves always frightens me. Too many of those in the riot helmets have the “Kent State” gene which overrides sound police training and leads them to trample civil rights and inflict physical damage on innocent people. I greatly appreciate being able to dial 911 and have police respond to help and protect me. This is not an indictment of professional, dedicated law enforcement. This brief observation is about the tattered edges of law enforcement and the dated, worthless practices that some enforcement officers still employ.

I fear those individuals, identified only after they explode, who project their anxieties, anger and insecurities by becoming officers of the law and marauding under the protection of a badge. These types seem to band together under a code of silence within their ranks among police and sheriff’s forces, as well as on the federal agencies across America. And this rogue element shares a similar mentality with Brandon Darby. They share a sick drive to assert themselves toward a narrow and mean expression of their fantasies and delusions. They have no allegiance to truth, fairness or humanity.

I can’t address the pathology of these individuals, because I am a writer, not a mental health professional. But the regular news reports and videos of brutal beatings of subdued, handcuffed people by uniformed officers is disturbing enough to indicate a real ongoing problem. Darby has, without landing a punch or kneeing a groin, vicariously satisfied his sickness, and the pushers providing his fix, the drug of importance he needs, are those Agents who are as indiscriminate in their judgment as the fringe “informants” they seem to select.

This is of small solace to those who are arrested and jailed with barely a nod to Miranda, and who are then forced to prove they have done nothing wrong except exercise their rights to assemble and voice protests. This could be called the “Darby-Hoover” symbiosis. Flawed and medieval, it ultimately forces those arrested to obtain legal counsel to disprove what a potentially mentally unbalanced “informant” fed to eagerly waiting agents. George Bush and his administration have provided more than tacit approval to the trampling of human and civil rights at home and abroad and this has further emboldened law enforcement excesses. As our new administration and legislators attack serious fiscal and energy problems in the coming term, let’s hope overall American law enforcement also undergoes a badly needed house cleaning.