David McReynolds :
The Republican debate and the raw ego of
Donald Trump

The most glaring problem was how little this group understands the world in which we now live. 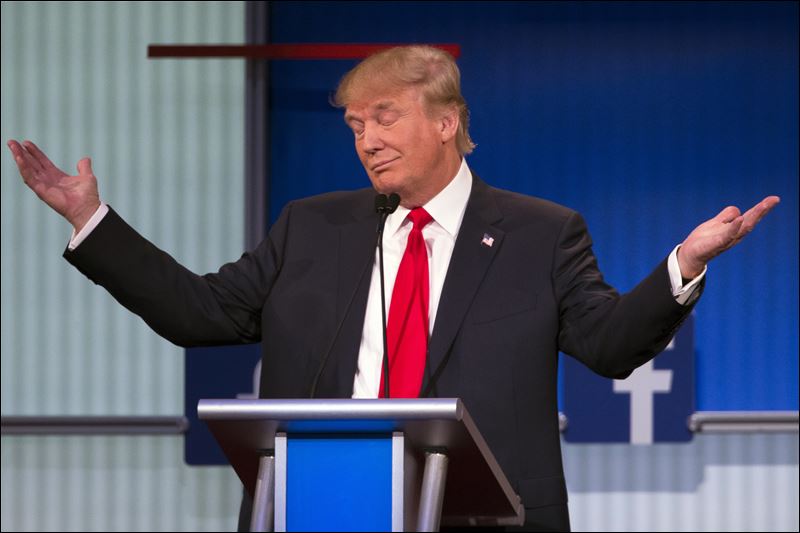 NEW YORK — My assumption is that most of you watched the Fox-sponsored debate between  the 10 leading GOP hopefuls. This is not an effort to comment on each of them, but rather a look at what was missed, and, inevitably, an observation about the strange man, Donald Trump, who still holds more than 20% approval in public polls.

Some deal with Trump by noting he is an entertainer, not a politician, which is true, but the man is shrewd enough to deflect every attack by a counterattack. He has never, in all the interviews with him which I have watched, laid out a plan for how to achieve his goals.

In my entire life I have never seen such utterly raw ego on display. For him all human relations are transactional — he gives money to Hillary Clinton because he wants her at his wedding. He donates to politicians because — and he blithely admits this — he expects favors in return.

The Fox team that posed the questions did a good job. They certainly did not hesitate to pin Trump to the mat. It is possible this was a planned gambit — Fox is the GOP’s own channel, and the GOP does not view Trump as a friend. But there was on odd whine from Trump when he complained about Megan Kelly’s questions; he felt badly used because, he noted, he had brought this huge audience to Fox and he wasn’t getting paid for taking part in the debate. It was, Trump implied, a favor on his part that he took part at all.

What in the world did Trump think a Presidential debate was about?

Trump represents the id of the American people.

What I felt was that Trump represents the id of the American people (or our worst side),  as Hitler effectively represented the id of the frustrated German middle class.

What you see with Trump is what you get — there is nothing more. I cannot imagine what it must be like to spend an evening with the man. While insults don’t help, I must say that of all the candidates, he was clearly the most ugly.

It was interesting that Mike Huckabee (very much yesterday’s news) and Ted Cruz both refrained from any criticism of Trump. They know he won’t get the nomination and they hope to pick up his supporters. (Which tells us all we need to know about Cruz).

Rand Paul was almost the only candidate who seemed to have principles rather than convenient positions. Ben Carson, who preaches the need for us to survive without the heavy helping hand of government, was quite happy with the notion of that same government using torture. (This man needs to have more coffee before the next debate.)

I was struck by the almost universal allegiance given to Christianity as a kind of state religion.

But, leaving aside the things not said (which one did not expect from these candidates), such as any alternative to Obamacare, what struck me was the almost universal allegiance given to Christianity as a kind of state religion. Scott Walker spoke of how he had been saved by the blood of the Lord Jesus Christ. The same men then spoke of how they would increase the military, how they would wage fierce war on ISIS, and would confront Iran with military force if needed.

(Mike Huckabee, one of those most eager to pledge his belief in Christian values, has said of the leaders of Iran that they are animals. Has he no memory — that these were the precise words the Nazi leaders used to justify the extermination of Europe’s Jews?)

Many years ago I was taken, with Pastor Martin Niemöller and the young secretary of the World Peace Council, to a famous wine cellar in Vienna. At one point the fellow from the World Peace Council asked Niemöller how, in view of the failures of Christianity, he could remain a believer. I remember his answer: “If it was the church, no I could not believe, but it is because of Jesus Christ that I believe.” This was a man who had survived the camps, had found the courage to resist Hitler. His belief system was clearly not a matter of a “state religion.”

Not being a Christian, I hesitate to offer the advice, but I do not believe this crew, starting with Scott Walker, has any idea what the central values of the Gospels are. Whatever else Jesus set out to establish, it was not a state religion. And those he came to save were not the billionaires, but the poor.

They would casually tear up the treaty with Iran, as if it had been worked out in a matter of minutes in some back room.

The most glaring problem, for me, was how little this group understands the world in which we now live. They would casually tear up the treaty with Iran, as if it had been worked out in a matter of minutes in some back room by the Secretary of State and the Iranians. Not, as was the case, the result of a long, arduous, complex struggle over many months, involving the Europeans, Russia, China, and Iran.

Netanyahu and AIPAC may yet succeed in destroying a treaty which would take Iranian nuclear weapons off the table for at least a decade. But if they succeed (in the process putting Israel’s own security at risk and creating a permanent crisis in U.S./Israeli relations), the Europeans would not sit down again with the U.S., nor would Russia, China, or Iran.

The talk of taking on ISIS suggested that all that was needed was a stronger Arab alliance (with Israel and the U.S.), which is bizarre. Saudi Arabia hates Israel — any alliance would be remarkable. In any case Saudi Arabia is not dropping bombs on ISIS but on Yemen. Turkey, a key part of this proposed grand alliance, is dropping bombs on those Kurds that the U.S. is supporting.

And Iran, so roundly condemned by the GOP, is actually doing some serious fighting against ISIS, while Iraq, where the U.S. spent over a trillion dollars, is unable to use the vast supply of U.S. weapons to defend its own territory. And Egypt? If there is an “evil enemy” in that area, it might well be Sisi’s government, which, as it took power, murdered over a thousand peaceful demonstrators, and has re-established a rigid authoritarian government.

The hard reality — and it is very hard — is that the U.S. empire was defeated in February of last year when Iraq lost Mosul, and when, out of nowhere, ISIS seized (and still holds) large areas of Iraq and Syria. But rather than trying to grapple with this new complex reality, the GOP candidates (with the exception of Rand Paul) want to double down, send in more “boots on the ground.”

I want the media to check the military records of those running for office, to see what military combat any of them ever saw.

The debate suggested to me how unprepared this crew is. I have left aside many other issues — social security, medical care, housing, police violence, etc. — because I didn’t expect the GOP to address those. But on foreign policy, they are not fit to enter the Oval Office. (Neither is Hillary, in my view, but she wasn’t in this debate.)