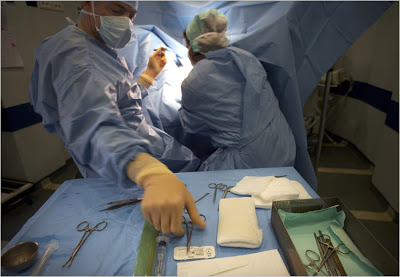 PARIS — The operation in the private clinic off the Champs-Élysées involved one semicircular cut, 10 dissolving stitches and a discounted fee of $2,900.

But for the patient, a 23-year-old French student of Moroccan descent from Montpellier, the 30-minute procedure represented the key to a new life: the illusion of virginity.

Like an increasing number of Muslim women in Europe, she had a hymenoplasty, a restoration of her hymen, the vaginal membrane that normally breaks in the first act of intercourse.

“In my culture, not to be a virgin is to be dirt,” said the student, perched on a hospital bed as she awaited surgery on Thursday. “Right now, virginity is more important to me than life.”

As Europe’s Muslim population grows, many young Muslim women are caught between the freedoms that European society affords and the deep-rooted traditions of their parents’ and grandparents’ generations.

Gynecologists say that in the past few years, more Muslim women are seeking certificates of virginity to provide proof to others. That in turn has created a demand among cosmetic surgeons for hymen replacements, which, if done properly, they say, will not be detected and will produce tell-tale vaginal bleeding on the wedding night. The service is widely advertised on the Internet; medical tourism packages are available to countries like Tunisia where it is less expensive.

“If you’re a Muslim woman growing up in more open societies in Europe, you can easily end up having sex before marriage,” said Dr. Hicham Mouallem, who is based in London and performs the operation. “So if you’re looking to marry a Muslim and don’t want to have problems, you’ll try to recapture your virginity.”

No reliable statistics are available, because the procedure is mostly done in private clinics and in most cases not covered by tax-financed insurance plans.

But hymen repair is talked about so much that it is the subject of a film comedy that opens in Italy this week. “Women’s Hearts,” as the film’s title is translated in English, tells the story of a Moroccan-born woman living in Italy who goes to Casablanca for the operation.

One character jokes that she wants to bring her odometer count back down to “zero.”

“We realized that what we thought was a sporadic practice was actually pretty common,” said Davide Sordella, the film’s director. “These women can live in Italy, adopt our mentality and wear jeans. But in the moments that matter, they don’t always have the strength to go against their culture.”

The issue has been particularly charged in France, where a renewed and fierce debate has occurred about a prejudice that was supposed to have been buried with the country’s sexual revolution 40 years ago: the importance of a woman’s virginity.

The furor followed the revelation two weeks ago that a court in Lille, in northern France, had annulled the 2006 marriage of two French Muslims because the groom found his bride was not the virgin she had claimed to be.

The domestic drama has gripped France. The groom, an unidentified engineer in his 30s, left the nuptial bed and announced to the still partying wedding guests that his bride had lied. She was delivered that night to her parents’ doorstep.

The next day, he approached a lawyer about annulling the marriage. The bride, then a nursing student in her 20s, confessed and agreed to an annulment.

The court ruling did not mention religion. Rather, it cited breach of contract, concluding that the engineer had married her after “she was presented to him as single and chaste.” In secular, republican France, the case touches on several delicate subjects: the intrusion of religion into daily life; the grounds for dissolution of a marriage; and the equality of the sexes.

There were calls in Parliament this week for the resignation of Rachida Dati, France’s justice minister, after she initially upheld the ruling. Ms. Dati, who is a Muslim, backed down and ordered an appeal.

Some feminists, lawyers and doctors warned that the court’s acceptance of the centrality of virginity in marriage would encourage more Frenchwomen from Arab and African Muslim backgrounds to have their hymens restored. But there is much debate about whether the procedure is an act of liberation or repression.

“The judgment was a betrayal of France’s Muslim women,” said Elisabeth Badinter, the feminist writer. “It sends these women a message of despair by saying that virginity is important in the eyes of the law. More women are going to say to themselves, ‘My God, I’m not going to take that risk. I’ll recreate my virginity.’ ”

The plight of the rejected bride persuaded the Montpellier student to have the operation.

She insisted that she had never had intercourse and only discovered her hymen was torn when she tried to obtain a certificate of virginity to present to her boyfriend and his family. She says she bled after an accident on a horse when she was 10.

The trauma from realizing that she could not prove her virginity was so intense, she said, that she quietly borrowed money to pay for the procedure.

“All of a sudden, virginity is important in France,” she said. “I realized that I could be seen like that woman everyone is talking about on television.”

Those who perform the procedure say they are empowering patients by giving them a viable future and preventing them from being abused — or even killed — by their fathers or brothers.

“Who am I to judge?” asked Dr. Marc Abecassis, who restored the Montpellier student’s hymen. “I have colleagues in the United States whose patients do this as a Valentine’s present to their husbands. What I do is different. This is not for amusement. My patients don’t have a choice if they want to find serenity — and husbands.”

A specialist in what he calls “intimate” surgery, including penile enhancement, Dr. Abecassis says he performs two to four hymen restorations per week.

The French College of Gynecologists and Obstetricians opposes the procedure on moral, cultural and health grounds.

“We had a revolution in France to win equality; we had a sexual revolution in 1968 when women fought for contraception and abortion,” said Dr. Jacques Lansac, the group’s leader. “Attaching so much importance to the hymen is regression, submission to the intolerance of the past.”

But the stories of the women who have had the surgery convey the complexity and raw emotion behind their decisions.

One Muslim born in Macedonia said she opted for the operation to avoid being punished by her father after an eight-year relationship with her boyfriend.

“I was afraid that my father would take me to a doctor and see whether I was still a virgin,” said the woman, 32, who owns a small business and lives on her own in Frankfurt. “He told me, ‘I will forgive everything but not if you have thrown dirt on my honor.’ I wasn’t afraid he would kill me, but I was sure he would have beaten me.”

In other cases, the woman and her partner decide for her to have the operation. A 26-year-old French woman of Moroccan descent said she lost her virginity four years ago when she fell in love with the man she now plans to marry. But she and her fiancé decided to share the cost of her $3,400 operation in Paris.

She said his conservative extended family in Morocco was requiring that a gynecologist — and family friend — there examine her for proof of virginity before the wedding.

“It doesn’t matter for my fiancé that I am not a virgin — but it would pose a huge problem for his family,” she said. “They know that you can pour blood on the sheets on the wedding night, so I have to have better proof.”

The lives of the French couple whose marriage was annulled are on hold. The Justice Ministry has sought an appeal, arguing that the decision has “provoked a heated social debate” that “touched all citizens of our country and especially women.”

At the Islamic Center of Roubaix, the Lille suburb where the wedding took place, there is sympathy for the woman.

“The man is the biggest of all the donkeys,” said Abdelkibir Errami, the center’s vice president. “Even if the woman was no longer a virgin, he had no right to expose her honor. This is not what Islam teaches. It teaches forgiveness.”