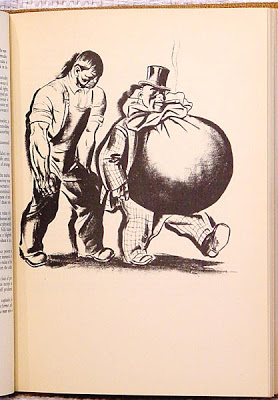 Image from La Revue Gauche.
The new class society:
How does the ruling class rule?

In an effort to teach and reflect more systematically about class rule in the United States, I have used an interesting book by Robert Perrucci and Earl Wysong, The New Class Society. It describes the transformation of the class system over the last 30 years from one in which there was a small ruling class, a significantly-sized “middle class,” and a lesser population of the poor and working classes.

According to these sociologists the diamond-shaped distribution of wealth, income, and power that existed during the “golden years” of U.S. capitalist hegemony after World War II began to change in the 1970s. Today, in the “new class society” the top one percent of income, wealth, and power holders, in conjunction with the remainder of the top 20 percent of managers, professionals and support staff of the super class, dominate at the expense of the bottom 80 percent of the population.

Using older language, ownership and control of the means of production and the relationships that exist between the owners and those who work constitute the “substructure” of the capitalist system. But what remains a puzzle is “how does the ruling class rule?”

Perrucci and Wysong suggest some answers that can serve as a basis for others to analyze and refine. They suggest four critical institutions, what I might call the “superstructure,” which ensure the maintenance of class rule. These are the political system, the education industry, the information industry, and the culture industry. Each in its own way is designed to shape the consciousness the new working class, the bottom 80 percent, has of itself and its place in the world of economics, politics, and society.

The political system constitutes the public arena where choices get made about public policy. It remains relevant to all actors in the society, from those who are at the top of the class system to the vast majority of the population constituting the new working class. However, since wealth most often can be translated into power, political institutions in usual times are used to serve the interests of the ruling class. Wealth is used to maintain power through financing elections, lobbying decision-makers, and funding so-called “think tanks” to give “expert” advice to the rulers.

Sometimes combined efforts of trade associations and corporations martial national campaigns to pressure government to shift the direction of public policy away from the popular classes to the rulers.

In an enlightening book by Elizabeth Fones-Wolff, Selling Free Enterprise, the author describes a continuing struggle in the 1940s and 1950s by the National Association of Manufacturers, the Chamber of Commerce, and like minded groups to convince the American people that individualism, private enterprise, and union-busting were more in their interests than expanding government programs, communities assuming more responsibility for social well-being, and building workers associations as sources of strength and protection from corporate elites.

In sum, political institutions are portrayed as the venue through which “the people decide,” when in fact usually their interests are not adequately represented.

The education industry, that is K through 12, college and university, and professional school education, provides the tools for credentialing some young people and not others. Usually the highest educational achievement is earned by those who come from privileged class families.

Systems of “tracking,” which are supposed to shape education to the talents and needs of individual students are used to promote and encourage those who come from the wealthy and to channel in other directions the children of the working class. “Streaming” policies are designed to encourage the creativity and interests of the children of wealth.

In sum, the education system, which does enlighten, inform, and train, also serves as a gatekeeper to reward and encourage those from the privileged classes and sustain and reproduce the new working class.

Perhaps the most vital function the education system serves is to “socialize” the young into their proper political roles in adulthood. Curricula promote the idea among children of the wealthy that they are creative, they can and should serve the public, and that their obligation is to be engaged citizens. Children of the new working class are taught to be obedient, respect authority and expertise, and participate in politics only as a voter.

The information industry provides our lens on the world. As communications theorists have long suggested, most of people’s information and experience of the world is indirect and mediated by electronic and print media.

The information we consume is packaged in “media frames.” Since most of the information we receive comes from fewer than 10 mega-media corporations, they are shaping the understanding of the world of the new working class. Why making war is necessary, how the United States must continue to support Wall Street during this economic crisis, and the diabolical reasons why some countries, such as Cuba or Venezuela, criticize the United States are examples of most people’s experience of these issues.

Media framing includes what stories are left out as well as how the ones communicated are covered.

Finally, the culture industry provides entertainment or activity for the non-working hours of most people. Television, movies, music, sporting activities are presented to people by the same handful of mega-corporations that dominate the information industry. Increasingly the products of these two industries merge so that “news” and “entertainment” become one. This is true for sex, violence, and mayhem reported as news and the fake news as reported by the comedians.

Perhaps most important to the culture industry is its portrait of presumed human experience. This experience highlights the super-natural, the futuristic, or the “reality” of swallowing insects and brutally competing with others for prize money or attractive sexual objects.

When the culture industry addresses contemporary experience, for example in situation comedies and crime shows, there are no workers present, African-Americans are hoodlums or victims, women are helpless, and authority figures such as the police are the friends of the people rather than employees of the state. Perrucci and Wysong refer to the primary role of the culture industry as “pacification.”

The points raised in this essay do not break any new theoretical ground. But, in my view, clearly identifying critical elements of the “substructure” and the “superstructure” can provide a road map for progressives to plan their future political agendas. Of course, a fundamental change in the mode of production, capitalism, is basic. But in the interim, organizing around the political system, and the education, information, and culture industries makes sense.