Posted on September 7, 2020 by Thorne Dreyer

Anti-worker politics violate the fundamental principles of the Universal Declaration of Human Rights. 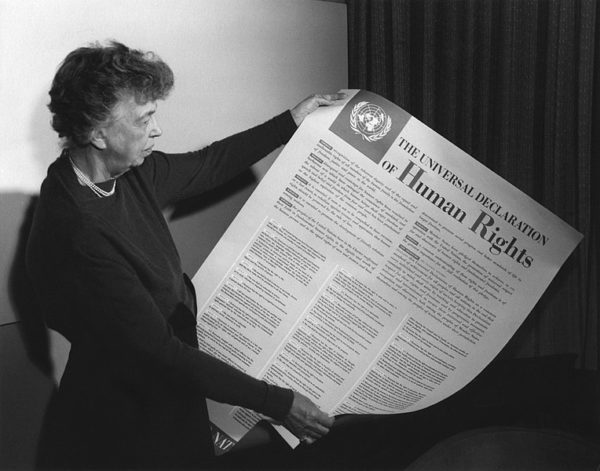 WEST LAFAYETTE, Indiana — The massive atrocities of World War II led nations to commit themselves permanently to the protection of basic rights for all human beings. Eleanor Roosevelt, the widow of the wartime president, Franklin Roosevelt, worked diligently with leaders from around the world to develop a document, to articulate a set of principles, which would bind humankind to never carry out acts of mass murder again. In addition, the document also committed nations to work to end most forms of pain and suffering.

Over 70 years ago, on December 10, 1948, delegates from the United Nations General Assembly signed the document which they called “The Universal Declaration of Human Rights.” It consisted of a preamble proclaiming that all signatories recognize “the inherent dignity” and “equal and inalienable rights of all members of the human family” as the “foundation of freedom, justice, and peace in the world.” The preamble declared the commitment of the signatories to the creation of a world “…in which human beings shall enjoy freedom of speech and belief and freedom from fear and want…”

The Universal Declaration of Human Rights consisted of 30 articles, with varying degrees of elaboration. The first 21 articles refer primarily to civil and political rights. They prohibit discrimination, persecution for the holding of various political beliefs, slavery, torture, and arbitrary arrest and detention. Persons have the right to speak their mind, travel, reside anywhere, a fair trial if charged with crimes, own property, form a family, and in the main to hold the rights of citizenship including universal and equal suffrage in his or her country.

The remaining nine articles address what may be called social and economic rights. These include rights to basic social security in accordance with the resources of the state in which the persons reside; rights to adequate leisure and holidays with pay; an adequate standard of living so that individuals and families have sufficient food, clothing, shelter, and medical care; and education, free at least at the primary levels. In addition, these nine articles guarantee a vibrant cultural life in the community, the right to enjoy and participate in the arts, and to benefit from scientific achievements.

Using the language of our day, the principles embedded in Article 23 of the Universal Declaration of Human Rights constitute a bedrock vision inspiring the global 99 percent to rise up against their exploiters from Cairo to Madison, to Wall Street, to cities and towns all over the world. But the global political economy is broken. The dominant mode of production, capitalism, increasingly cannot provide work, fair remuneration, and rights of workers to speak their mind and organize their own associations. In addition the economic system cannot provide a comfortable way of life because the value of what workers produce is expropriated by the top one percent of global society.

Right to Work laws, for example, which can be found in over 20 states allow workers to gain the benefits of union representation on the shop floor without joining unions or paying for union services which are provided to all workers. The basic goal of RTW laws is to bankrupt the labor movement. The end result, as data suggests in every state, is to reduce rights, benefits, and working conditions for all workers. The National Right to Work Committee, the American Legislative Exchange Council, and other right-wing groups funded and organized by the one percent, want to eliminate hard-fought worker rights which will reduce the costs of labor, wages, working conditions, and the standard of living of all workers, unionized or not.

Data about the world and data about the United States make it clear that there has been a 40-year trajectory in the direction opposite to the rights enshrined in the Universal Declaration of Human Rights. Global inequality is growing. The rights and abilities of workers to form unions are shrinking. Standards of living of most of humankind are declining. The ability of most workers to acquire secure jobs is declining. Globally there has been a quantum shift from agricultural, manufacturing, and service employment to the informal sector, oftentimes “street hustling.” And in 2020, the global pandemic has afforded the capitalist class the opportunity to increase exploitation and immiseration.