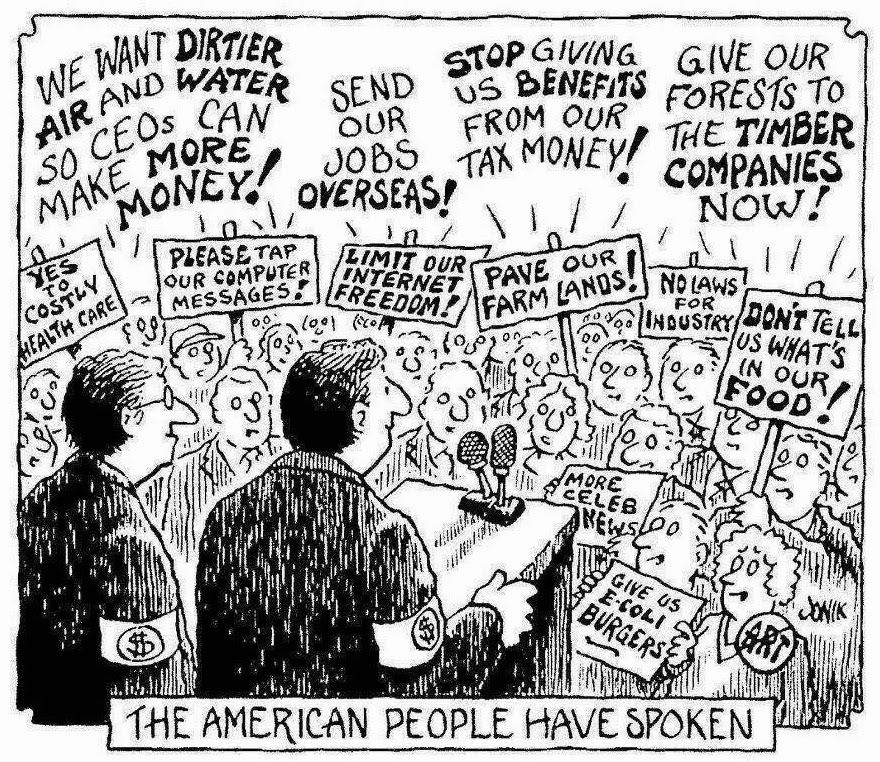 The Republicans now control the major media, the Supreme Court, the Congress, and soon the presidency.

All throughout America, right down to the local level, buried in a tsunami of cash and corruption, our public servants are being morphed into corporate operatives.

The Internet may be next. Above all, if there is one thing that could save us a shred of democracy, it’s preserving net neutrality. This fight could in fact outweigh all the others, and may be decided soon. Whatever depression you may now feel, shake it off to wage this battle. If we now lose the ability to freely communicate, we are in the deepest hole of all.

The roots of this corporate coup reach where they always do when empires collapse.

The roots of this corporate coup reach where they always do when empires collapse — useless, cancerous, debilitating, endless imperial war.

Lyndon Johnson lit the fuse in March 1965. He had a chance to get us out of Vietnam. For many complex reasons — none of them sane — he escalated. He never recovered, and neither has our nation.

In 1967-’68, an aroused generation marched for peace at the Pentagon, Chicago, and elsewhere. We were accused of shattering the Democratic Party. But in fact we forced Johnson to negotiate a pre-election truce that might have saved the presidency for Hubert Humphrey.

As we all now know, that truce was treasonously sabotaged by Richard Nixon, in league with Henry Kissinger. LBJ knew what had been done, but said nothing. Had he trusted the American public with that knowledge, Nixon would have been gone long before Watergate, the war might have ended far sooner,  the Democratic Party might still have meant something.

Instead, the party and the rest of us became prisoners of imperial war, captives of the corporations that profit from it.

And from a dozen hellish years of Reagan-Bush, we got a showy, corporate Bill Clinton… and not a single substantial social reform. But the corporations got NAFTA, gutted social welfare, soaring college tuitions, abolition of New Deal safeguards against Wall Street greed, and much more.

They also got the death of the Fairness Doctrine from Reagan, and then a 1996 telecommunications act from Clinton that gave them full control of the major media. The age of Fox “News” was born in double-think.

Meanwhile Al Gore and John Kerry allowed the corporations to gut our electoral system. Gore won in 2000, saw the election stolen in Florida, and — like LBJ with Nixon’s treason — said not a word. It was absurdly easier to blame Ralph Nader for Gore’s blithe discard than to buckle down and fight for an election protection apparatus to preserve the vote so many had fought and died to win.

Kerry won in 2004, saw the election stolen in Ohio, and repeated Gore’s meek, mute skulk to oblivion. The Democrats let a corporate Jim Crow gut the registration process, deny millions of Americans their vote, install a national network of easily flippable electronic voting machines… and they said nothing.

Along the way the Supreme Court was handed to the corporations. Soon enough, they would open the floodgates.

But from the ashes of the Iraq war and the horrors of Bush 2, enough public power remained in 2008 to finally put an African-American in the White House. With his apparent opposition to the Iraq War, and loads of rhetoric about hope and change, Barack Obama won a mandate to heal the wounds inflicted by yet another Bush corporate presidency.

Then he sank us in the quicksand of Southwest Asia.

In analyzing this latest electoral debacle, our Orwellian corporate bloviators avoid like the plague any mention of corporate money or imperial war.

But like LBJ in Vietnam… Afghanistan and Obama’s other wars have gutted his presidency and all he might have been. They’ve drained our shrunken moral and financial resources. They’ve turned yet another Democratic harbinger of hope into feeble corporate cannon fodder. They’ve battered and alienated yet another generation of the progressive core.

Thus the GOP has been enthroned by a half-century of Democrats who’ve helped drag us into endless war, ignored our electoral rights and sold their souls — and the nation’s — to a zombie army of corporate operatives.

The money power has ruled this nation before. This time it means a whole new level of all-out war against social justice, our basic rights, our ability to live in harmony with our Mother Earth.

Beset by a whole new level of global disaster, we have no choice but to find some completely new answers. Our survival depends on it.

It will take all our creative and activist juices. Nothing is clear except that it won’t be easy.

And that no matter which corporate party tries to lead us there, the path to the promised land does not go through the deadly quicksand of imperial war, empty rhetoric, or corrupted elections.

Read more of Harvey Wasserman’s writing on The Rag Blog.

[Rag Blog contributor Harvey Wasserman was a pioneer of the environmental movement. You can find Harvey Wasserman’s History of the United States and Solartopia! Our Green-Powered Earth at www.solartopia.org where this article also appears.]