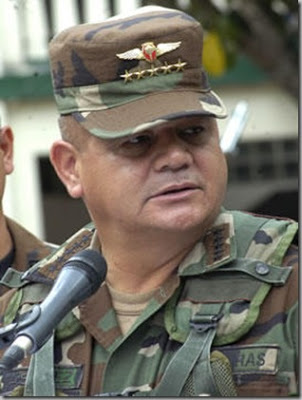 The Georgia-based U.S. military school is infamous for training over 60,000 Latin American soldiers, including infamous dictators, “death squad” leaders and others charged with torture and other human rights abuses.

At least two leaders of the coup launched in Honduras on June 28 were apparently trained at a controversial Department of Defense school based at Fort Benning, Georgia infamous for producing graduates linked to torture, death squads and other human rights abuses.

Leftist President Manuel Zelaya was kidnapped and transported to Costa Rica on Sunday morning after a growing controversy over a vote concerning term limits. Over the last week, Zelaya clashed with and eventually dismissed General Romeo Vasquez — who is now reportedly in charge of the armed forces that abducted the Honduran president.

According to the watchdog group School of Americas Watch, Gen. Vasquez trained at the Western Hemisphere Institute for Security Cooperation at least twice — in 1976 and 1984 — when it was still called School of Americas.

The Georgia-based U.S. military school is infamous for training over 60,000 Latin American soldiers, including infamous dictators, “death squad” leaders and others charged with torture and other human rights abuses. SOA Watch’s annual protest to shut down the Fort Benning training site draws thousands.

According to SOA Watch, the U.S. Army school has a particularly checkered record in Honduras, with over 50 graduates who have been intimately involved in human rights abuses. In 1975, SOA Graduate General Juan Melgar Castro became the military dictator of Honduras. From 1980-1982 the dictatorial Honduran regime was headed by yet another SOA graduate, Policarpo Paz Garcia, who intensified repression and murder by Battalion 3-16, one of the most feared death squads in all of Latin America (founded by Honduran SOA graduates with the help of Argentine SOA graduates).

General Vasquez isn’t the only leader in the Honduras coup linked to the U.S. training facility. As Source Kristin Bricker points out:

The head of the Air Force, Gen. Luis Javier Prince Suazo, studied in the School of the Americas in 1996. The Air Force has been a central protagonist in the Honduran crisis. When the military refused to distribute the ballot boxes for the opinion poll, the ballot boxes were stored on an Air Force base until citizens accompanied by Zelaya rescued them. Zelaya reports that after soldiers kidnapped him, they took him to an Air Force base, where he was put on a plane and sent to Costa Rica.

Thanks to Victor Agosto / The Rag Blog