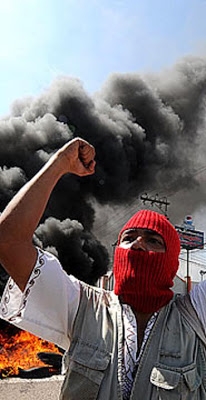 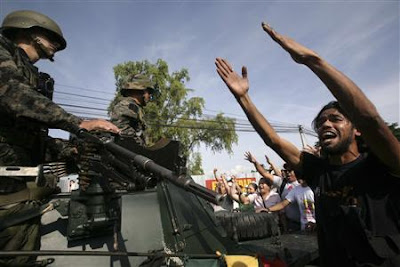 Demonstrator outside the Presidential Palace following the kidnapping of President Zelaya of Honduras. (Top) Photo from Orlando Sierra / AFP / Getty. (Below) Photo from Reuters.
Resistance and Repression in Honduras

People are taking the streets in Honduras despite incredibly hostile conditions created by the military.

An unknown number of Hondurans have taken to the streets today (Sunday) in an effort to stop the coup that the military, in league with Congress and the Supreme Court, has carried out against democratically elected President Manuel “Mel” Zelaya.

Due to intermitant power outages and heavy rain, independent media within Honduras has had extreme difficulty transmitting news. This means that while there’s been plenty of news in the mainstream media about the actions people with a lot of political power have been taking — from Chavez and the ALBA nations to the Organization of American States to the United States — there’s been very little reported about what rank-and-file Hondurans have been doing to reverse the coup.

However, it is clear that Hondurans are resisting. People are taking to the streets in Honduras despite incredibly hostile conditions created by the military. Radio Es Lo De Menos reports that their colleagues on the ground have been fired at by snipers who are positioned in rooftops around the city. They stress that the gunfire at this point has only been in the form of “warning shots” and no one has been reported injured from gunfire.

The Civic Council of Popular and Indigenous Organizations of Honduras (COPINH) wrote in a communique,”We tell everyone that the Honduran people are carrying out large demonstrations, actions in their communities, in the municipalities; there are occupations of bridges, and a protest in front of the presidential residence, among others. From the lands of Lempira, Morazán and Visitación Padilla, we call on the Honduran people in general to demonstrate in defense of their rights and of real and direct democracy for the people, to the fascists we say that they will NOT silence us, that this cowardly act will turn back on them, with great force.”

Radio Es Lo De Menos reported that the military has set up roadblocks all over the country in an attempt to prevent Zelaya supporters from reaching the capital. The soldiers are also reportedly attempting to shut down public transportation.

Zelaya supporters took to the streets in an attempt to prevent military reinforcements from arriving at the Presidential Palace. There are protests all over Tegucigalpa, trying to impede military movements. 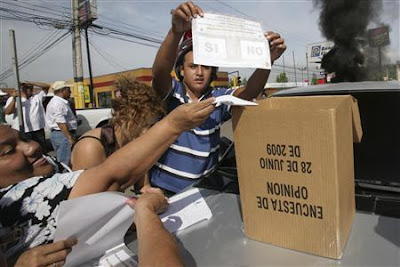 “Soldiers try to prevent journalists from filming as they patrol the area around the presidential palace in Tegucigalpa, Sunday June 28, 2009. Soldiers arrested Honduras’ President Manuel Zelaya and disarmed his security guards after surrounding his residence before dawn Sunday, his private secretary said. Protesters called it a coup and flocked to the presidential palace as local news media reported that Zelaya was sent into exile.” 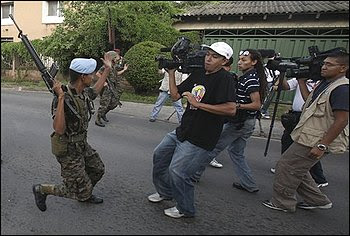 Honduran labor leader Ángel Alvarado told TeleSUR that he has called a national strike for Monday in Honduras to protest the coup that has ousted President Manuel Zelaya.

Meanwhile, Radio Es Lo De Menos is repeatedly pleading with the international community that protests be organized outside Honduran embassies around the world.

This entry was posted in RagBlog and tagged Central America, Honduras, Latin America. Bookmark the permalink.