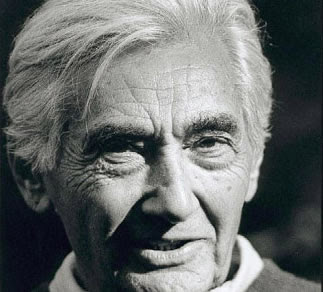 Howard Zinn is the author of, most notably, A People’s History of the United States, a National-Book-Award-nominated text that investigates US history from the standpoint of the oppressed. Other books by Zinn include Declarations of Independence: Cross-Examining American Ideology and his 1995 autobiography, You Can’t be Neutral on a Moving Train.
Zinn: US ‘In Need of Rebellion’
September 9, 2008

Al Jazeera speaks to Howard Zinn, the author, American historian, social critic and activist, about how the Iraq war damaged attitudes towards the US and why the US “empire” is close to collapse.

Q: Where is the United States heading in terms of world power and influence?

HZ: America has been heading – for some time, and is heading right now – toward less and less world power, less and less influence.

Obviously, since the war in Iraq, the rest of the world has fallen away from the United States, and if American foreign policy continues in the way it has been – that is aggressive and violent and uncaring about the feelings and thoughts of other people – then the influence of the United States is going to decline more and more.

This is an empire which is on the one hand the most powerful empire that ever existed; on the other hand an empire that is crumbling – an empire that has no future … because the rest of the world is alienated and simply because this empire is top-heavy with military commitments, with bases around the world, with the exhaustion of its own resources at home.

[This is] leading to more and more discontent and home, so I think the American empire will go the way of other empires and I think it is on its way now.

Q: Is there any hope the US will change its approach to the rest of the world?

[There is also] the higher and higher food prices, the more and more insecurity, the sending of the young people to war.

I think all of this may very well build up into a movement of rebellion.

We have seen movements of rebellion in the past: The labour movement, the civil rights movement, the movement against the war in Vietnam.

Q: How did the US get to this point?

Of course, many Americans were not, that is why half of the population doesn’t vote, they’re alienated.

But there are just enough Americans who have been satisfied, you might say getting some of the “goodies” of the empire, just some of them, just enough people satisfied to support the system, so we got this way because of the ability of the system to maintain itself by satisfying just enough of the population to keep its legitimacy.

And I think that era is coming to an end.

Q: What should the world know about the United States?

They don’t understand the basic undemocratic nature of the American political system in which all power is concentrated within two parties which are not very far from one another and people cannot easily tell the difference.

So I think we are in a situation where we are going to need some very fundamental changes in American society if the American people are going to be finally satisfied with the kind of society we have.

Q: Do you think the US can recover from its current position?

HZ: Well, I am hoping for a recovery process. I mean, so far we haven’t seen it.

You asked about what the people of the rest of the world don’t know about the United States, and as I said, they don’t know that there is an opposition.

There always has been an opposition, but the opposition has always been either crushed or quieted, kept in the shadows, marginalised so their voices are not heard.

People in the rest of the world hear the voices of the American leaders.

They do not hear the voices of the people all over this country who do not like the American leaders who want different policies.

I think also, people in the rest of the world should know that what they see in Iraq now is really a continuation of a long, long term of American imperial expansion in the world.

I think … a lot of people in the world think that this war in Iraq is an aberration, that before this the United States was a benign power.

It has never been a benign power, from the very first, from the American Revolution, from the taking-over of Indian land, from the Mexican war, the Spanish-American war.

It is embarrassing to say, but we have a long history in this country of violent expansion and I think not only do most people in other countries [not] know this, most Americans don’t know this.

Q: Is there a way for this to improve?

It is hard to see that hope because these Americans who feel that way have been shut out of the communications system, so their voices are not heard, they are not seen on the television screen, but they exist.

I lived in the [US] south for seven years, in the years of the civil rights movements, and it didn’t seem that there was any hope, but there was hope under the surface.

Well, then that hope became manifest … it actually turned into change.

Q: Do you think there is a way out of this and for the future influence of the US on the world to be a positive one?

HZ: Well, you know for the United States to begin to be a positive influence in the world we are going to have to have a new political leadership that is sensitive to the needs of the American people, and those needs do not include war and aggression.

[It must also be] sensitive to the needs of people in other parts of the world, sensitive enough to know that American resources, instead of being devoted to war, should be devoted to helping people who are suffering.

You’ve got earthquakes and natural disasters all over the world, but the people in the United States have been in the same position as people in other countries.

The people in this country, the poor people especially and the people of colour especially, have been as much victims of American power as people in other countries.

Q: Can you give us an overall scope of everything we talked about – the power and influence of the United States?

HZ: The power and influence of the United States has declined rapidly since the war in Iraq because American power, as it has been exercised in the world historically, has been exposed more to the rest of the world in this situation and in other situations.