Ike: Oil Contamination in the Gulf, Too 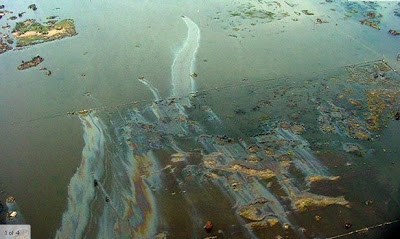 At least 500,000 gallons of crude oil spilled into the Gulf of Mexico as Hurricane Ike assaulted the U.S. Gulf Coast. The environmental damage is only now starting to emerge, weeks after the storm. Here, oil coats the waters off southwest Louisiana on Sept. 15. Photo: Louisana Department of Environmental Quality/AP
Tons of Oil Spilled Into Gulf During Ike
By Dina Cappiello, Frank Bass and Cain Burdeau / October 6, 2008

WASHINGTON — Hurricane Ike’s winds and massive waves destroyed oil platforms, tossed storage tanks and punctured pipelines. The environmental damage only now is becoming apparent: At least a half million gallons of crude oil spilled into the Gulf of Mexico and the marshes, bayous and bays of Louisiana and Texas, according to an analysis of federal data by The Associated Press.

In the days before and after the deadly storm, companies and residents reported at least 448 releases of oil, gasoline and dozens of other substances into the air and water and onto the ground in Louisiana and Texas. The hardest hit places were industrial centers near Houston and Port Arthur, Texas, as well as oil production facilities off Louisiana’s coast, according to the AP’s analysis.

“We are dealing with a multitude of different types of pollution here … everything from diesel in the water to gasoline to things like household chemicals,” said Larry Chambers, a petty officer with the U.S. Coast Guard Command Center in Pasadena, Texas.

The Coast Guard, with the Environmental Protection Agency and state agencies, has responded to more than 3,000 pollution reports associated with the storm and its surge along the upper Texas coast. Most callers complain about abandoned propane tanks, paint cans and other hazardous materials containers turning up in marshes, backyards and other places. 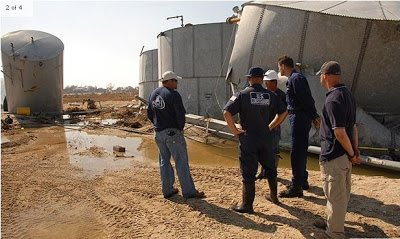 No major oil spills or hazardous materials releases have been identified, but nearly 1,500 sites still need to be cleaned up.

The Coast Guard’s National Response Center in Washington collects information on oil spills and chemical and biological releases and passes it to agencies working on the ground. The AP analyzed all reports received by the center from Sept. 11 through Sept. 18 for Louisiana and Texas, providing an early snapshot of Ike’s environmental toll.

With the storm approaching, refineries and chemical plants shut down as a precaution, burning off hundreds of thousands of pounds of organic compounds and toxic chemicals. In other cases, power failures sent chemicals such as ammonia directly into the atmosphere. Such accidental releases probably will not result in penalties by regulators because the releases are being blamed on the storm.

Texas Gov. Rick Perry also suspended all rules, including environmental ones, that would inhibit or prevent companies preparing for or responding to Ike.

Power outages also caused sewage pipes to stop flowing. Elsewhere, the storm’s surge dredged up smelly and oxygen-deprived marsh mud, which killed fish and caused residents to complain of nausea and headaches from the odor.

At times, a new spill or release was reported to the Coast Guard every five minutes to 10 minutes. Some were extremely detailed, such as this report from Sept. 14: “Caller is making a report of a 6-by-4-foot container that was found floating in the Houston Ship Channel. Caller states the container was also labeled ‘UM 3264,’ which is a corrosive material.” The caller most likely meant UN3264, an industrial coding that refers to a variety of different acids.

State and federal officials have collected thousands of abandoned drums, paint cans and other containers.

Other reports were more vague. One caller reported a sheen from an underwater pipeline and said the substance was “spewing” from the pipe.

The AP’s analysis found that, by far, the most common contaminant left in Ike’s wake was crude oil — the lifeblood and main industry of both Texas and Louisiana. In the week of reports analyzed, enough crude oil was spilled nearly to fill an Olympic-sized swimming pool, and more could be released, officials said, as platforms and pipelines were turned back on.

The Minerals Management Service, which oversees oil production in federal waters offshore, said the storm destroyed at least 52 oil platforms of roughly 3,800 in the Gulf of Mexico. Thirty-two more were severely damaged. But there was only one confirmed report of an oil spill — a leak of 8,400 gallons that officials said left no trace because it dissipated with the winds and currents.

Air contaminants were the second-most common release, mostly from the chemical plants and refineries along the coast.

About half the crude oil was reported spilled at a facility operated by St. Mary Land and Exploration Co. on Goat Island, Texas, a spit of uninhabited land north of the heavily damaged Bolivar Peninsula. The surge from the storm flooded the plant, leveling its dirt containment wall and snapping off the pipes connecting its eight storage tanks, which held the oil and water produced from two wells in Galveston Bay.

By the time the company reached the wreckage by boat more than 24 hours after Ike’s landfall, the tanks were empty. Only a spattering of the roughly 266,000 gallons of oil spilled was left, and that is already cleaned up, according to Greg Leyendecker, the company’s regional manager. The rest vanished, likely into the Gulf of Mexico.
Ike’s fury might have helped prevent worse environmental damage. Its rough water, heavy rains and wind helped disperse pollution.

Air quality tests by Texas environmental regulators found no problems even in communities near industrial complexes, where power outages and high winds in some cases knocked out emergency devices that safely burn off chemicals. But the storm also zapped many of the state’s permanent air pollution monitors in the region.

“We came out of this a lot better than we could have been, especially thinking where the storm hit,” said Kelly Cook, the homeland security coordinator for the Texas Commission on Environmental Quality.

Katrina ranked as among the worst environmental disasters in U.S. history, with about 9 million gallons of oil spilled. But Ike’s storm surge was less severe than feared — 12 feet rather than 20-feet plus — and the dikes, levees and bulkheads built around the region’s heavy industry mostly held.

Much of that infrastructure is protected by a 1960s-era Army Corps of Engineers system of 15-foot levees similar to the one around New Orleans that failed catastrophically during Katrina. In that storm, floodwaters dislodged an oil tank at a Murphy Oil Corp. refinery in Meraux, La., spilling more than 1 million gallons of oil into the surrounding neighborhoods, canals and playgrounds.

Ike’s toll on wildlife is still unfolding. Only a few pelicans and osprey turned up oiled, but the storm upended nature. Winds blew more than 1,000 baby squirrels from their nests. The storm’s surge pushed saltwater into freshwater marshes and bayous, killing grasses where cattle graze and displacing alligators. Flooding also stranded cows.

The storm also may mangle migration. The Texas coast is a pit stop for birds heading south for the winter. But Ike wiped out many of their food sources, stripping berries from trees and nectar-producing flowers from plants, said Gina Donovan, executive director of the Houston Audubon Society, which operates 17 bird sanctuaries in Texas.

“It is going to cause wildlife to suffer for awhile,” she said.

Along the Houston Ship Channel, a tanker truck floating in 12-feet-high flood waters slammed into a storage tank at the largest biodiesel refinery in the country, causing a leak of roughly 2,100 gallons of vegetable oil. The plant, owned by GreenHunter Energy Inc., uses chicken fat and beef tallow to make biodiesel shipped overseas. It opened just months earlier.

Oneal Galloway of Slidell, La., called to report oil in his neighborhood. The town, north of Lake Pontchartrain, was flooded with Ike’s surge. He said oil had washed down the streets.

“It looked like a rainbow in the water,” Galloway told the AP. “The residue of the oil is all over our fences, there were brown spots in the yard where it killed the grass.”

The likely culprit was not a refinery or oil well, according to Shannon Davis, the director of the parish’s public works department, but a neighbor brewing biodiesel in his backyard with used cooking grease.

This entry was posted in RagBlog and tagged Environment, Hurricane Ike, Nature, pollution. Bookmark the permalink.