Jonah Raskin’s ‘A Terrible Beauty: The Wilderness of American Literature’ is a fresh look at American letters from the bottom up. 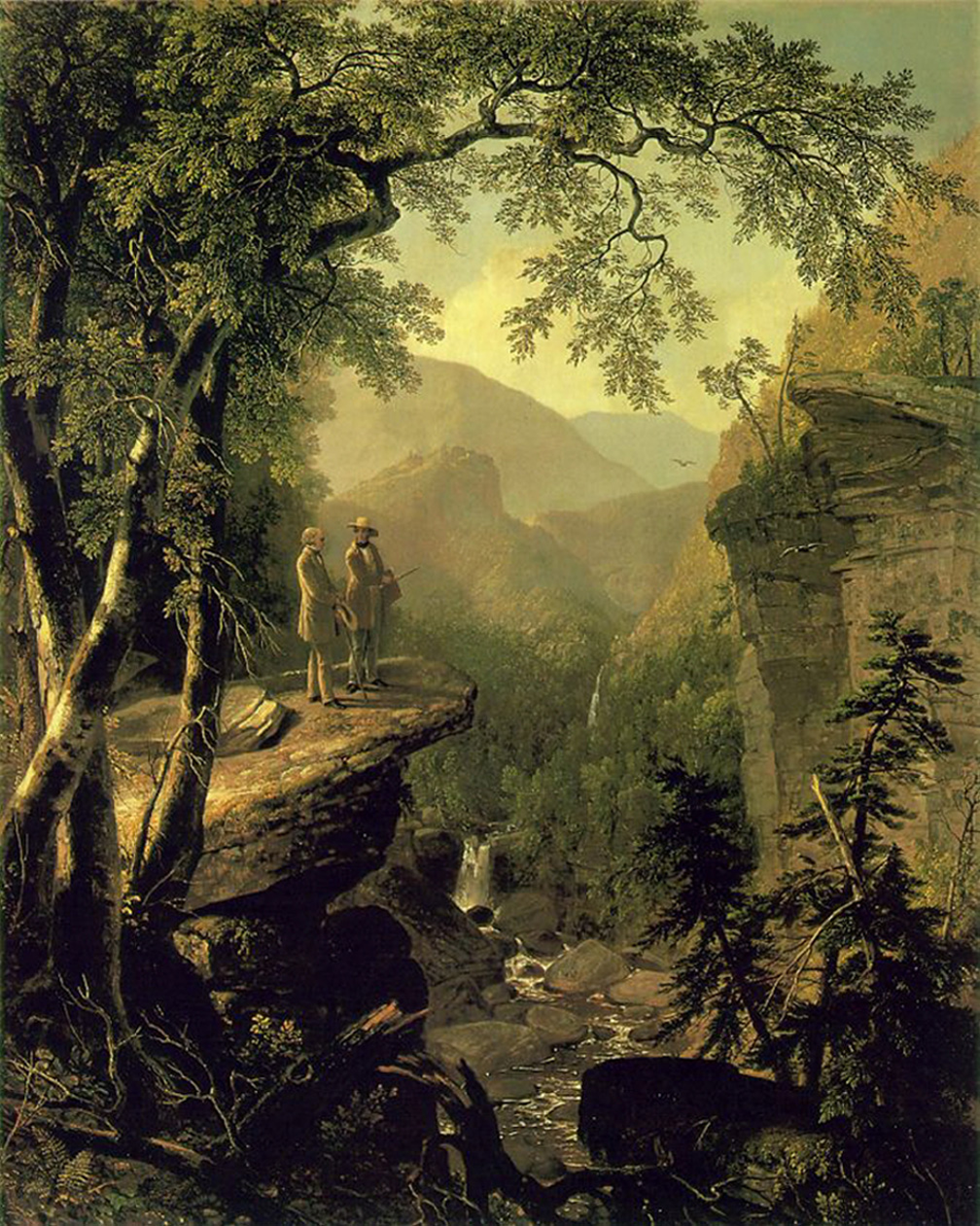 Arrival of the developers! “Kindred Spirits” by Asher Durand, 1849.

Like a true nature’s child
We were born
Born to be wild
— Steppenwolf, “Born to be Wild”

Native Americans in Sonoma County … tell me that their ancestors didn’t understand how and why white men were able to cut down sacred forests and not be struck down dead. Global warming, they tell me, is nature’s revenge.
— Jonah Raskin, A Terrible Beauty

To many, and I do not necessarily exclude myself from this group, American literature, taken as a whole, can seem like something of an oxymoron, and its feckless treatment at the hands of friends and frenemies has done little to dispel the notion.

Lampooned and lambasted, fawned upon and mythologized, deconstructed and reconstructed and unreconstructed again and again, so much mind-numbing jargon has been heaped upon the corpus of American letters that the subject has all but drowned in critical excess. Even America’s own writers have been guilty of piling on.

Now comes cultural critic Jonah Raskin with a new book, A Terrible Beauty: The Wilderness of American Literature (Regent Press, Berkeley, 2014) to try to rescue the gasping body from the swamp. 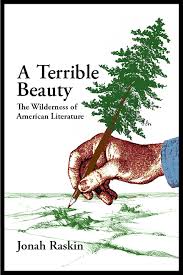 Born and raised in Long Island, he got his M.A. at Columbia University and Ph.D. at the University of Manchester, Manchester, UK, where he wrote a dissertation about Rudyard Kipling and Joseph Conrad which later morphed into his first book, The Mythology of Imperialism, published by Random House in 1971. (The New York Times called it “Maoist” literary criticism, but esteemed cultural critic Edward Said called it “one of the genuinely important handful of books on modern literature published in the last two decades.”)

He has written important studies of Allen Ginsberg and Abbie Hoffman.

He has written some 14 books since, from important studies of Allen Ginsberg (American Scream) and Abbie Hoffman (For the Hell of It) to books on farming and marijuana activism to poetry chapbooks.

What gives Prof. Raskin an authentic perspective to break with past top-down analytics is his own “double consciousness,” as W.E.B. Dubois described the “two-ness” that comes with the consciousness of being an outcast in one’s own land. In Raskin’s case, he occupied the halls of academia as a student protester at Columbia University in 1968 and he has occupied academia from the business side of the lectern. 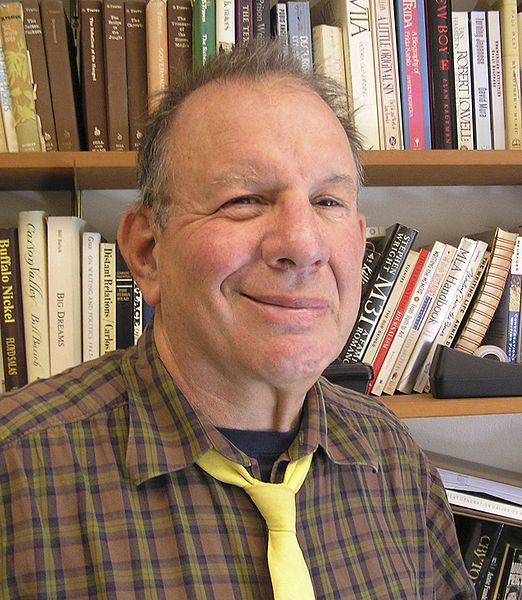 He was a red-diaper baby, was beaten by New York police in a window-smashing street demonstration, and experimented with Weather Underground lifestyle and ideology. His ambivalence about WU practice led him to the Yippies and an enduring friendship with Hoffman, Paul Krassner, and cohorts. A move to northern California introduced him to agrarian perspectives, environmental activism, and the cannabis liberation movement.

Academic trappings aside, Jomo (as his NYC friends know him) is a “real wild child,” a “walking contradiction, partly truth and partly fiction,” a rock ’n’ roll professor, and this, it turns out, is exactly what is required to take a fresh look at American letters from the roots up.

Jonah borrows his title from a line — “A terrible beauty is born” — in William Butler Yeats’ poem, “Easter 1916,” and Raskin conjures that the phrase describes the North American continent. “Settlers, colonists, explorers, and pioneers,” he remarks, “have certainly been so terrified by its awesome beauty that they have wanted to destroy it.”

Henry David Thoreau noted that while Americans were “clearing the forest in our westward progress, we are accumulating a forest of books in our rear, as wild and unexplored as any of nature’s primitive wildernesses.” Raskin looks at this forest of books before and after Thoreau from the perspective of contemporary environment crisis and offers insights into the uniquely American contradictions that inform our national character. It’s a journey into and, sadly, out of the wilderness as trees and land are commodified and wasteland emerges.

Raskin wryly notes that the first white visitors failed to recognize ‘that the Indians enjoyed civilizations of their own.’

The narrative begins with the clash of cultures characterized by the Europeans, with their monopoly of written documentation, as a confrontation between the civilized white and the savage aboriginal. Raskin wryly notes that the first white visitors failed to recognize “that the Indians enjoyed civilizations of their own” and “that Europeans themselves behaved as the worst sort of barbarians.”

Sebastian Cabot, Henry Hudson, and William Bradford ventured into dark corners of the New World, and the Puritans stumbled along in their footsteps, overwhelmed and desperately seeking to expel the dark forces that lurked in the shadows beyond the clearing and threatened their continued existence.

Raskin’s portrait of Roger Williams — “maverick minister, poet, ambassabor, spy, adjunct of English military officers, trader, translator, and backwoodsman” as well as “Calvinist minister and the founder of Rhode Island” — is especially compelling. With views on religious liberty and separation of church and state at loggerheads with the colonial government in Boston, Williams spent much of his life as, literally, an exile from white society, living among the Indians and learning their language and customs. But, as he informed the colonial governor, he had not “turned Indian,” had not joined forces with the “wild Americans,” and, indeed, would use his friendship with the natives to spy for the British and colonial military.

‘The movement into backwoods America turned the European into a barbarian.’

As a newly minted United States of America emerged from 13 former British colonies and new emigrants arrived from European, pioneers like Daniel Boone looked to the West, to Kentucky, Ohio, Indiana, and along the Mississippi River. “With plebeian axes,” Raskin writes, “they assaulted the forests,” and “in the act of leveling the wilderness and clearing open spaces, a great deal of the American character was forged.” Quoting urbanist Lewis Mumford, Raskin notes that “the movement into backwoods America turned the European into a barbarian.”

Raskin’s “double consciousness” brings unexpected light to another historically ignored sector of the American story — women. About the Lewis and Clark expedition, he notes, “Lewis and Clark became American archetypes: rough, ready, and rowdy members of a gang of men … [my dramatic pause] led by an Indian woman” named Sacagawea. 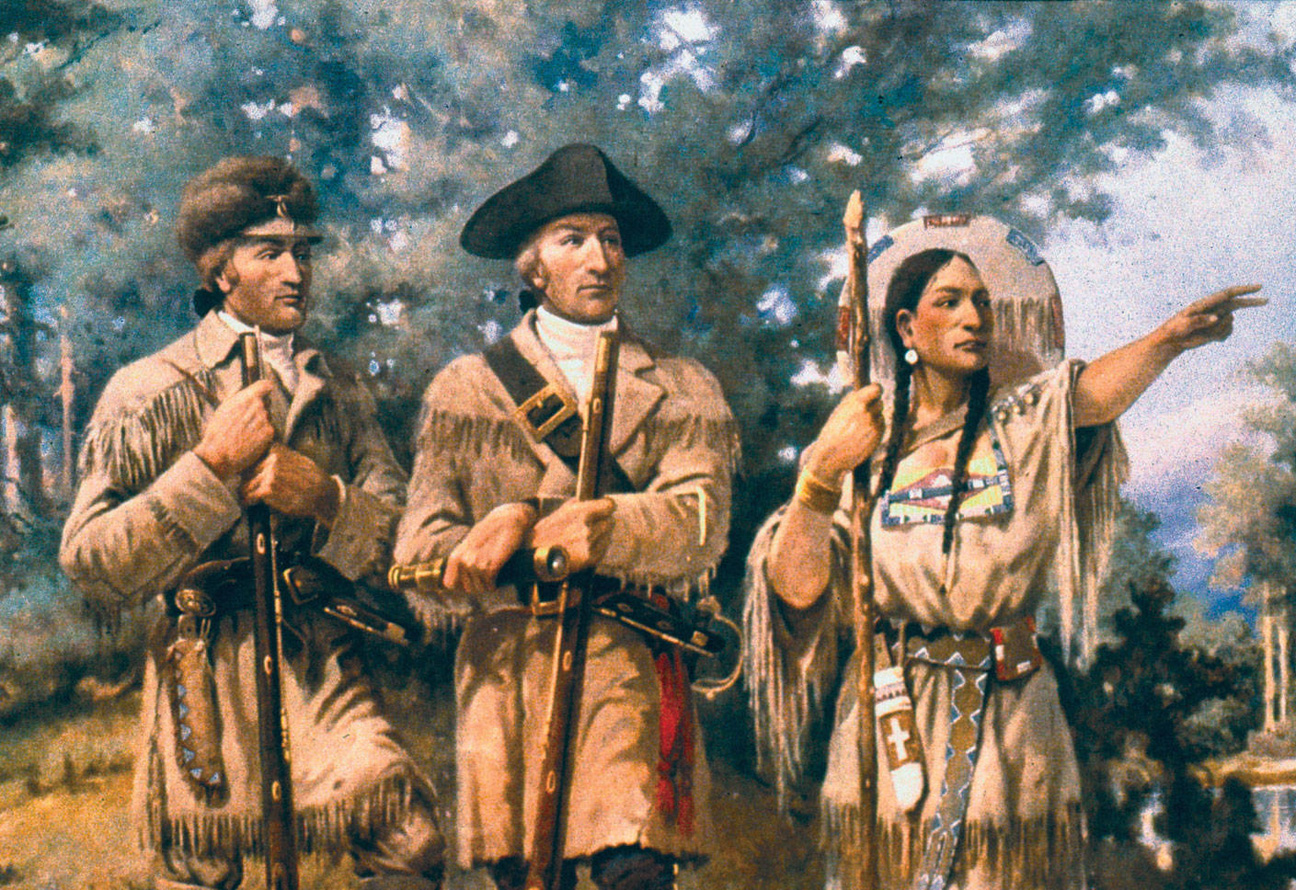 “Lewis and Clark at Three Forks.” Two white guys lost in the wilderness. Who saves them? A Native-American woman named Sacagawea! Detail from mural by Edgar Samuel Paxson at the Montana State Capitol.

In marked contrast to the famed early American teller of testosterone-driven tales James Fenimore Cooper, Raskin admires early 19th century authors Lydia Maria Child and Catharine Sedgwick, who “empathized with outcasts, misfits, captives, and fugitives.” “Not surprisingly,” he concludes, “they wrote more subversively than Cooper. … They both created white women who love, live with, and marry Indian men and don’t go to hell because they do.” The “captive female” literary device was, even then, a male-dominated trope.

Like wild man poet Walt Whitman, Raskin writes, Emily Dickinson “sang a song of herself,” but hers was an art form in which “the wild and the wilderness are available to anyone with an imagination. … ‘Mad’ in the sense that Keroauc and the Beats used the word, she recognized as they did that ‘Much Madness is Divinest sense.’” “Like the Beats,” he notes, “she empathized with men and women deemed dangerous and placed in prisons and asylums.”

Raskin appreciates Dickinson’s inside-out reversal of the Puritan values lingering in Massachusetts of the mid-19th century. “Unlike the Puritans,” he observes, “she liked witches.”

Inversion of the original Puritan meme continued as the actual wilderness vanished and the extent of the damage was revealed. Mark Twain, Jack London, Willa Cather, and F. Scott Fitzgerald each take stock of the frontier myth and extend or deconstruct it for a 20th century audience.

Pointing to the series of environmental catastrophes that have followed The Great Gatsby (1925), Jonah quotes Fitzgerald’s closing passage: “Man must have held his breath in the presence of this continent, compelled into an aesthetic contemplation he neither understood nor desired, face to face for the last time in history with something commensurate to his capacity for wonder.”

“In the 1920s, while living on Long Island, reading Stendhal, and writing Gatsby,” Raskin states, “Fitzgerald was deeply disenchanted with the America of bellicose Teddy Roosevelt and boisterous John D. Rockefeller. He was also impelled to create an enchanted moment when awed Dutch sailors held their breath and gazed at a green continent.” (Growing up in the Long Island of the 1950s and 60s, Jonah observes that the landscape has not improved.)

Fast forward to the 21st century where the frontier has shrunk to the approximate distance between Sarah Palin’s back porch telescope and Russia, wilderness has become a road trip to a dude ranch or a state or national park, a Mad Max movie (in which the wasteland is the wilderness), a state of mind induced by hallucinogens, or a video game. The witch or the beastly savage of Puritan paranoia is reinvented as a cheap Hollywood horror flick. Space may be the final frontier, but it takes a Star Wars post-sequel prequel to inspire a social media uptick.

He turns to a galaxy of environment writers such as Wendell Berry, Kenneth Rexroth, Rachel Carson, and Gary Snyder.

What does Jonah offer about life amidst a rapidly disappearing wild? He turns to a galaxy of environment writers such as Wendell Berry, Kenneth Rexroth, Rachel Carson, and Gary Snyder, who have “traced the destruction of the wild” … [and] also, in their books and lives, “planted the seeds for the renewal of culture, agriculture, and nature. In particular, Raskin mentions author Marilynne Robinson, who in 1998 wrote, “Wilderness is where things can be hidden. Wilderness and its analogues seem to invite denial in every form.”

In his own voice, Raskin adds: “The questions that she [Robinson] asks are the questions that set me on fire: ‘What have we done for the whale, if we lose the sea?’ and ‘How many countries in this world have bombed or poisoned their own terrain in the name of protecting it from its enemies?’”

“America, the double and the twin of itself, lives on as a dark, dirty wasteland and perhaps, just perhaps, in some way as a wilderness in a bright new day. The geography of hope won’t die an easy death.”

Do they still teach geography in the nation’s schools?

Jonah Raskin will join Thorne Dreyer on Rag Radio, Friday, February 6, from 2-3 p.m. (CST). Rag Radio is a syndicated radio show that originates on Austin’s KOOP 91.7-FM. The show is streamed live here. Also on Friday, from 5:30-7:30 p.m, Jonah will be our guest at a Rag Blog Happy Hour at Maria’s Taco Xpress in Austin.

UPDATE: Listen to the podcast of our Rag Radio interview with Jonah Raskin here:

[Rag Blog contributing editor and designer James Retherford is an Austin-based writer, graphic designer, and political activist who has designed two of Jonah Raskin’s books. Jim, who was active in SDS, the Yippies, and political guerrilla theater, was a founder and editor of The Spectator in Bloomington, Indiana, in 1966, and was the ghost writer for Jerry Rubin’s iconic book, Do It!]