Jack A. Smith :
Have Obama and the Democrats actually
become liberals?

Wow, this is like Christmas every day for the next two years! Of course, none of it will happen. 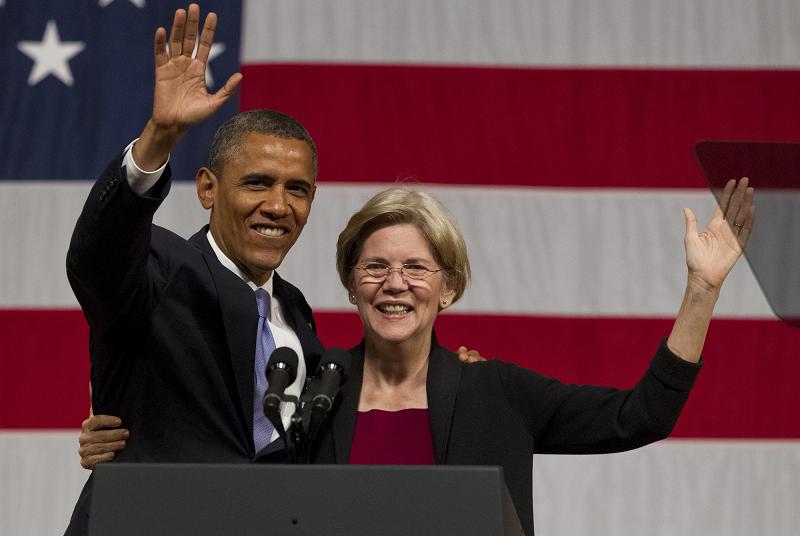 The fire-breathing Obama with Elizabeth Warren at the 2015 State of the Union Address. Photo from Getty Images.

Has the 2015 center-right Democratic Party transmuted literally overnight into its old center-left visage of the mid-1960s — the party of Medicare, Medicaid, food stamps, poverty programs, voting rights, desegregation, and more?

As he begins his seventh year in office, with negligible accomplishments behind him, President Barack Obama suddenly appears to have transformed into the candidate liberal voters thought they had elected in November 2008 — the candidate of “Yes we can!” and “Change we can believe in.” The liberal Nation weekly even headlined its editorial in the February 6 edition: “Obama Gets His Mojo Back.”

We are referring of course to President Obama’s State of the Union speech January 20 wherein he went far beyond the 12-step Economic Agenda put forward a month earlier by the independent self-described socialist senator from Vermont, Bernie Sanders, a genuine friend of working people. Too bad Bernie, but you have just been out-mojoed by the new liberal superstar.

Obama decided that salvation may repose in conveying the impression of a
move to liberalism.

Why did this happen? The Democratic Party was whipped badly in the congressional elections, losing both House and Senate, and Obama’s popularity was down in the pits after six years of essentially giving in to the Republicans and ignoring the economic plight of working families. Dreading the prospect of two more years of humiliation and the potential Democratic loss of the 2016 presidential contest, Obama, his inner circle, and some party bigwigs evidently decided that salvation may repose in conveying the impression of a move to liberalism for the time being.

Wow, this is like Christmas every day for the next two years! Unfortunately, none of these proposals will pass a Republican House and Senate — except perhaps the corporate-friendly Trans Pacific Partnership free trade policy — as Obama well knows. But it makes him and his party look good to alienated Democrats and independents during the lead up to elections, and it won’t cost a dime.

The speech was an astonishing salvage job in terms of public relations, but from a left point of view such a miraculous metamorphosis is much too good to be true. I stand behind what I wrote in the Hudson Valley Activist Newsletter a week before the 2008 election: “The center-right is completely inadequate to the task of resolving the multitude of complex economic, political, and social problems confronting our people and our country.”

From a left point of view such a miraculous metamorphosis is much too good to be true.

Had the president actually desired to embrace a liberal agenda he may have succeeded in passing significant legislation when the GOP was weak in 2009-10, but he would not try. He has ignored and distrusted the minority liberal sector in Congress for years and has publicly disparaged liberalism several times in recent years.

He has also made it abundantly clear that his priority is to govern “as an American,” not a liberal or conservative — hence his continuing propensity for deep compromise with the right-wing Republican opposition. Even his most liberal triumph, Obamacare, was not only a boon for the insurance companies but was directly based on the then center-right former Republican Gov. Mitt Romney’s Massachusetts healthcare plan. Since Romney’s conversion to the hard right, Obama was the only moderate Republican left standing until his sudden dalliance with liberalism.

So what was the motivation behind the president’s uncharacteristically liberal State of the Union speech wherein he told the American people “The shadow of [economic] crisis has passed” and “tonight, we turn the page”?

But first we must question the assertion that the crisis has passed. Yes, there has been a temporary uptick in American capitalism’s long-term economic stagnation that has benefited the corporations, banks, Wall Street, and the 1%. It is not true in any significant sense for the majority of the people — the poor, working class, lower middle class, and sectors of the middle class.

A page has been turned but all it reveals is that Obama’s promises can’t materialize in the remainder of his term and who knows where the 2016 Democratic candidate will stand on social priorities? The whole project may swiftly run out of steam.

Obama has at least three purposes for such an uncharacteristic speech:

1. Legacy: Obama obviously intends to spend his remaining two years in office reconstructing his ne’er-do-well record and deflated image. He will appear to fight for the people by proposing liberal programs that most working people have wanted all along but haven’t obtained since the early 1970s, including from four years of Democrat Carter, eight years of Democrat Clinton, and six years of Obama.

When he loses in Congress he will be hailed by history as having put up a good fight
for a popular cause.

Instead of spending the next two “lame duck” years brooding about his setbacks and ongoing humiliations from Republican congressional leaders, he has taken an unexpected initiative with a spanking new program for the occasion. When he loses in Congress he will be hailed by history as having put up a good fight for a popular cause. It’s an admirable ploy. In addition he has undercut Republican plans to appear less obstructive and more willing to compromise in the next two years. Let’s see the GOP compromise on mandatory sick leave or free community college tuition.

2. Election 2016: A show of concern for the economic and social difficulties plaguing a majority of Americans during 2015-’16 will help the Democratic Party win the 2016 election. Its clear lack of concern in recent decades is one reason why the majority of the white working class has voted Republican.

The Economist of January 24 put it this way:

This State of the Union message is best seen not so much as a statement of Mr. Obama’s intentions for the last two years of his presidency but as an attempt to influence the election campaign of 2016. He seems to be gambling that while Republicans in Congress will obstruct him, he can talk over them — and perhaps force them to adopt some of his ideas or else be seen fighting to protect the perks of the wealthy. “Will we accept an economy where only a few of us do spectacularly well,?” asked Mr. Obama, daring the Republicans to say yes.

3. “Inclusive Capitalism”: The malignant growth of economic inequality in America, the shrinking of the middle class, wage stagnation or low wages for the multitudes while the 1% and its minions prosper is now viewed by key exponents of global capitalism as a potential danger to the “free market” system. In effect, “How long will the masses of people put up with this?” In addition, widespread low wages reduce consumption, thus cutting profits.

Leading capitalists have promoted the concept of “inclusive capitalism” to avoid eventual mass resistance — that is, taking relatively small steps to make it seem that capitalism actually cares about the human beings it exploits. Supporters of this concept in the U.S. include leading economists (such as former Democratic Treasury Secretary Lawrence Summers), politicians (including Sen. Charles Schumer, D-NY), business leaders, bankers, and financiers, among others.

Obama’s suggestions fall within this capitalist gambit to safeguard the system by offering small concessions to working people to deflect social anger away from the 1% and the elite power structure. Some of his State of the Union proposals are good. They will not be approved, but it will appear to many Americans that “at least someone cares about our troubles.” Obama’s legacy is already bubbling over in anticipation of the result.

In time, if there is sufficient organized agitation and serious protests against mounting economic inequality, it may be possible to obtain some legislation that will benefit the people. But of course it is going to take a great deal more than that for American workers to bring about the construction of a society truly open to the concept of approximate economic and social equality, a goal that humanity deserves, to achieve even though it must leave the 1% and its hangers-on behind.