They are protesting the police killings and forced disappearances of students in the Mexican
state of Guerrero. 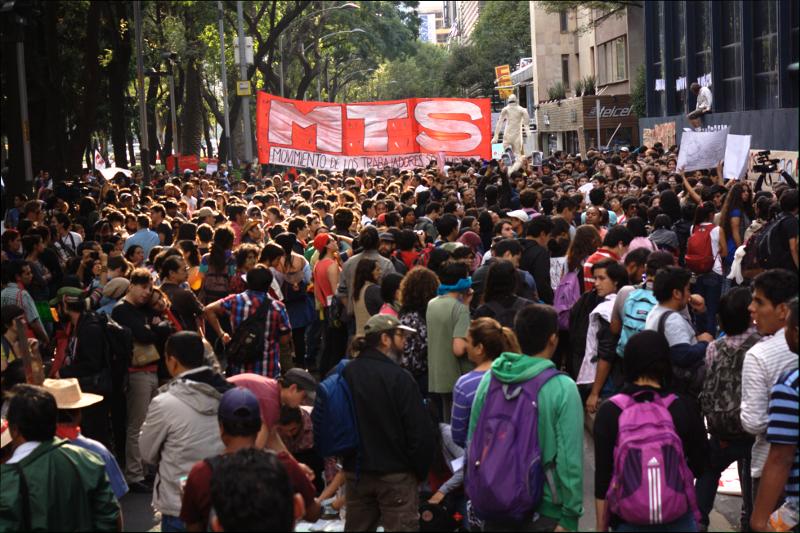 MEXICO CITY — Students at most public universities in the Mexico City metropolitan area are on strike for 24 to 48 hours. The student strike is part of the continuing protests against the September 26 police killings of five and forced disappearance of 43 students from the teacher preparation school in Ayotzinapa, Tixtla, Guerrero.

The students were ambushed — some shot, some kidnapped — by local police in Iguala, Guerrero, on September 25 and 26. On Tuesday, federal officials announced that, based on DNA evidence, at least some of the mass graves — which, according to cops who have been detained in connection with the crimes, contain the bodies of the students — in fact contain other corpses.

This may indicate the extent of police collusion with narcos and/or police propensity to kill people and hide their bodies, but it also gives hope to the families and other activists who continue to believe that the students are alive.

University students in Mexico City joined the families of the disappeared students in protest.

University students in Mexico City joined the families of the disappeared students in a protest outside the offices of one of the major federal law enforcement bodies, to demand that the students be presented and released alive. 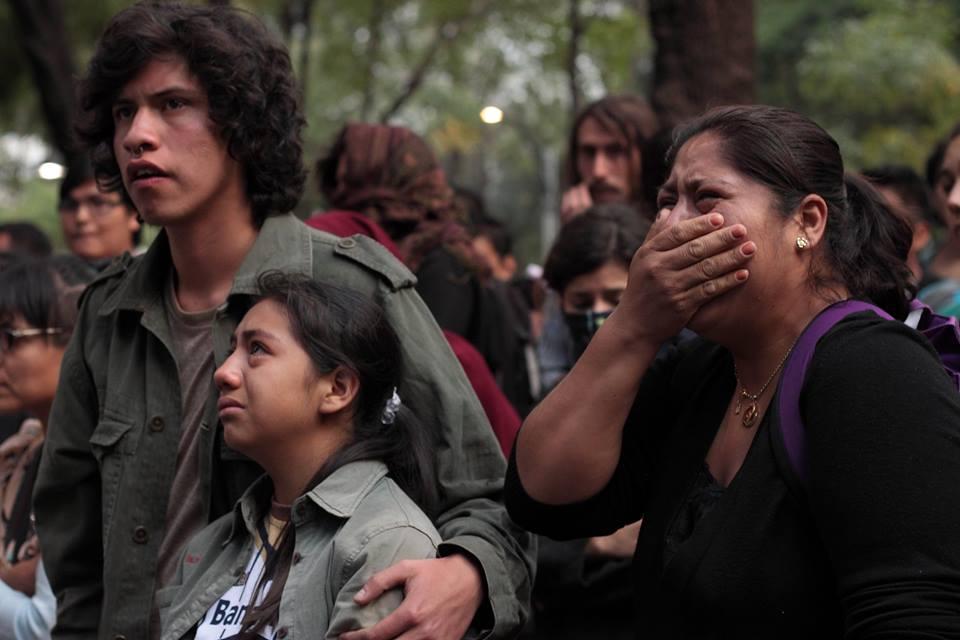 On Monday in Chilpancingo, the capital city of Guerrero, someone — possibly students or members of the left dissident (and majority) caucus of the teachers’ union — burst into the main state office building and set fire to part of it; Tuesday, in the same city,  teachers occupied banks and convenience stores, according to the newspaper La Jornada.

Ángel Aguirre, the governor of Guerrero, continues to deny any possible complicity in what has happened in Guerrero.

Aguirre’s administration has been marked by acts of repression that include the detention of the community self-defense leader Nestora Salgado and the 2012 killings by state police of two students from the same education school. And the mainstream newspaper, El Universal, has accused Aguirre of having at least 15 relatives on the state payroll. Some activists are demanding his resignation; others seek a deeper solution that would attack the complicity and hypocrisy of the federal government, which is led by a different political party.*

There has been widespread condemnation of the massacre by major news media.

There has been widespread condemnation of the massacre by major news media and others who tend to be unconditional allies and, as a result, the usual accusations of “vandalism” have not been voiced. Teachers and education students, especially in rural states like Guerrero, Oaxaca, and Morelos, and in progressive urban areas like Mexico City, have been in the forefront of protests against education “reforms” which, like in the U.S., mean subordinating critical thinking to standardized testing. 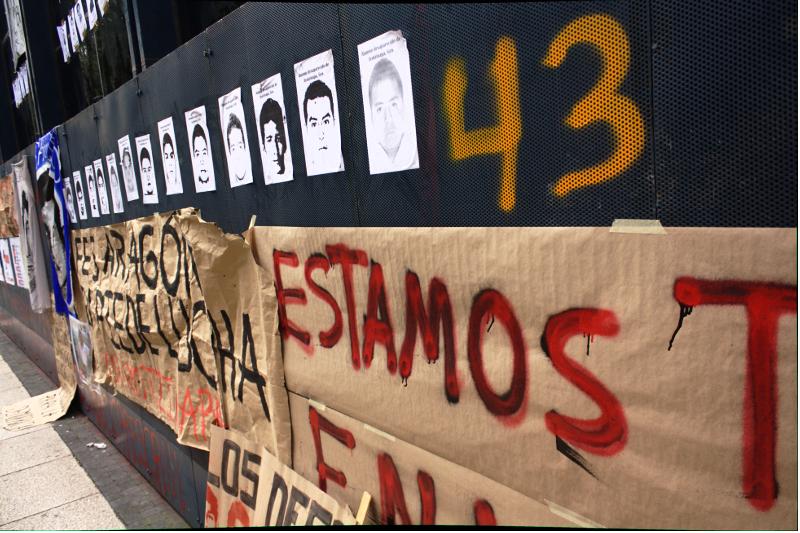 The walls outside the building housing the attorney general’s offices are covered with images of the 43 who are missing. Mario Marlo / Somoselmedio.org.

On Friday, October 17, students at some schools of the Instituto Politécnico Nacional (IPN) will mark one month on strike. Most of the others joined the strike about a week later. The surprising firmness of these students, who are sometimes perceived as more conservative than their liberal arts counterparts, has been an inspiration for others throughout the country. They have forced the resignation of the director of the IPN but say this is only the beginning.

To learn more about what’s going on, please see my articles in The Rag Blog and Southside Pride, as well as Spanish-language reports in Proceso, La Jornada, El Sur de Guerrero, and Contralínea, as well as videos on TeleSur and Al Jazeera.

*The response of the U.S. government, of course, is similarly hypocritical; the state and federal officials lauded by Obama and Kerry for being tough in the war on drugs are the butchers in this and other cases.