For the last 40 years, a cabal of authoritarian, mostly religiously-inspired people has worked to diminish women’s constitutional right to control their bodies. 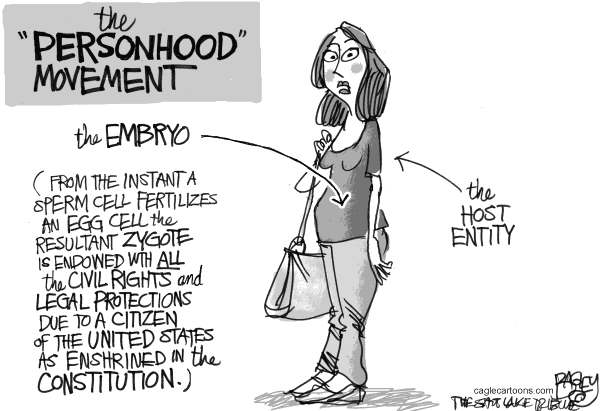 Human beings are constantly trying to change reality. I don’t object to this characteristic. In fact, I’ve spent a good deal of my life opposing some of the worst realities of the species: war, poverty, racism, sex discrimination, environmental destruction. What I have never tried to do is diminish anyone’s constitutional rights. But this is the chosen work of some in this country when it comes to women’s control of their reproductive processes.

By reproductive processes, I mean not only childbirth, but also contraception and termination of unwanted pregnancies, whether because of personal circumstances, the health of the fetus, or the physical or mental health of the woman.

In 1973, the United States Supreme Court, in Roe v. Wade, determined that women had the constitutional right to control their reproductive processes, essentially unhindered, prior to and through the first six months of a pregnancy. Previously, the court had found that women had a right to contraception, a right at that time denied to women by some states.

Under our Constitution, when life begins is not a matter that can be decided by religious dogma or doctrine.

The contraception decision did not create much opposition, but Roe v. Wade set off a storm of opposition, mostly by those with religious objections based on the belief that life begins at conception. But, under our Constitution, when life begins is not a matter that can be decided by religious dogma or doctrine.

For the last 40 years, a cabal of authoritarian, mostly religiously-inspired people has worked to diminish women’s constitutional right to control their bodies in ways both large and small. This work has made exercising the right increasingly difficult, if not impossible for many women, and it has led to a campaign of harassment and dishonesty, not of principle.

The campaign of harassment began with picketing of reproductive clinics, screaming at women who are patients at those clinics as they enter and leave, advocating the murder of doctors who practice in the reproductive rights field, putting economic pressure on such doctors and their clinics, picketing their homes, frightening their families and staffs, and actually killing some doctors and staff who worked at or operated women’s clinics.

These are the earlier responses to Roe v. Wade. As much horror as their viciousness should evoke in civilized people, they were at least honest and transparent. But their effect pales in comparison to the legislative harassment of women and women’s rights.

The legislative harassment that underlies this current war against women stems from the history of harassment, not law.

Using legislation to achieve political goals is nothing new in a republic. But the legislative harassment that underlies this current war against women stems from the history of harassment, not law.

Harassment is behavior intended to disturb or upset, especially as it is repeated over and over again. It intentionally threatens or alarms its target. It torments, annoys, bothers, or troubles another. Its purpose is to exhaust and intimidate the other person. Harassment constrains and causes such distress that the targeted person becomes too tired or fearful to go on. When legislation and harassment are melded together, they destroy women’s reproductive rights.

Legislative harassment is both dishonest and deceitful because the reasons given for the legislation are bogus and mere smoke screens to hide the real purposes of the legislation — to destroy women’s constitutional right to make their own reproductive decisions. Legislative harassment puts so many roadblocks and procedures in the way of women receiving full reproductive rights that those rights are destroyed:

These changes in law are dishonest. They harass women. Yet, advocates of such new legal requirements claim that they protect the health of pregnant women or protect the rights of the fetus. But the Supreme Court decided 40 years ago that the Constitution protects the lives of people in existence and the viable unborn.

None of the proposed measures are necessary to protect the health of women, the only grounds on which they can be constitutionally supported…

None of the proposed measures are necessary to protect the health of women, the only grounds on which they can be constitutionally supported because they have little or nothing to do with protecting viable fetuses.

The Constitution does not permit religious beliefs to be foisted on anyone. So, few of those who support these legislative harassment measures will admit publicly that the purpose is to limit women’s access to reproductive rights in order to fulfill a religious agenda.

I had not thought much about this 40-year campaign as one of dishonest harassment until I listened to the February 22, 2014, interview with Katherine Spillar on Freethought Radio, a weekly podcast of the Freedom From Religion Foundation (which is also broadcast on a few stations, including one serving Texas A & M students and faculty).

Spillar is the Executive Editor of Ms. Magazine, now a quarterly publication dedicated to the rights of women, and the Executive Vice-President of the Feminist Majority Foundation.

As Ms. Magazine recently reported, “Texas has lost more than 60 family planning clinics, most of which provided birth control, screening for sexually transmitted infections and other services, not abortions” as a result of these relatively new legislative harassment measures. Supported by this recent history, Spillar characterized the actions of those opposed to women’s reproductive rights as a war against women:

There is no question that this is a war on women. . . . Women’s lives are literally at stake in this. Not only our literal lives, but our health, our ability to be autonomous human beings, and to pursue work, and to live our full lives.

Annie Laurie Gaylor, co-host of Freethought Radio, added: “Margaret Sanger pointed out that if you can’t control your own fertility, there is nothing else you can control about your life if you are a woman.”

The proponents of legislative harassment believe that such harassment of women who seek the full panoply of rights guaranteed them under our Constitution is fair and just. It is fair and just to them because it fits with their worldview, which suggests that whatever they deem moral (that is, in keeping with their religious beliefs), should be applied to everyone.

It is the tip of the theocratic staff pulling open the constitutional tent so that rights once held as inalienable can escape into the ether, never again to serve as a guide to freedom and liberty for all, especially women.

This kind of legislative harassment leads to second-class servitude to an ancient value system derived from a 4,000-year old religion. This value system came into being long before the advent of the biological sciences and the Enlightenment teachings that should inform our lives in the 21st century.

If legislative harassment is seen for what it is, perhaps it can be stopped. But stopping it will require the action of all women and men of goodwill who support the full equality of women.