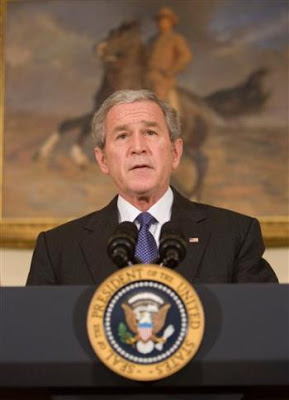 President Bush pauses during a statement on the auto industry at the White House on Friday, December 19, 2008 in Washington. Photo by Evan Vucci / AP.
‘It looks like the feds are going to end up owning and supporting a failed industry that lacks the cheap oil to give it a credible future.’
By Roger Baker / The Rag Blog / December 20, 2008

See ‘Bush: auto plan only way to stave off collapse’ by Tabassum Zakaria, Below.

The real problem is that keeping a failed and mismanaged industry on life support for a few more months doesn’t do much good. Not unless somebody in charge can think of a smart way forward after that down payment runs out.

“…the carmakers would provide a restructuring plan by March 31 that would show they would survive, or they would be required to repay the loans…”

Is this requirement really serious? How could these companies possibly repay the bridge loans if they need the money so badly right now? Or is it considered acceptable to lie to the public this openly about how our future tax obligations are being handled.

It looks like the feds are going to end up owning and supporting a failed industry that lacks the cheap oil to give it a credible future.

(Gasoline is cheap for the moment, but future fuel affordability is an illusion.)

If Detroit can make cars, they SHOULD be able to make the trains and wind turbines we will really need in the future. But how could the Detroit car companies, given their track record, possibly decide to do something that bold on their own?

It is obviously going to take the feds to tell them they must make such basic changes. We are groping toward socialist management and public control of the unprofitable sectors of US basic industry, all the while being afraid to admit that this is happening.

Bush: auto plan only way to stave off collapse
By Tabassum Zakaria / December 20, 2008

WASHINGTON — President George W. Bush on Saturday said offering government loans to U.S. automakers was the only option left to prevent the industry from collapsing after alternatives were ruled out or failed.

Bush on Friday announced the government would provide $17.4 billion in emergency loans to financially strapped General Motors (GM.N: Quote, Profile, Research) and Chrysler LLC CBS.UL to prevent them from failing. Ford decided it did not immediately need similar loans.

In return, the carmakers would provide a restructuring plan by March 31 that would show they would survive, or they would be required to repay the loans.

Lawmakers from Bush’s own Republican Party criticized the plan, which can be changed by the incoming administration of Democratic President-elect Barack Obama after he takes office Jan. 20.

“We have ended up with an agreement open to interpretation, that eliminates the sense of crisis, where taxpayer dollars are expended and we are left to hope that the next administration has the will to enforce the tough concessions necessary to make these companies viable for the long term,” Sen. Bob Corker, a Tennessee Republican said.

Bush in a weekly radio address said his economic advisers warned that if the automakers filed for bankruptcy it would lead to a “disorderly collapse” of the industry and send the economy into a “deeper and longer recession.”

After Congress was unable to pass legislation to bail out the auto industry, the only way to stave off a collapse was for his administration to step in, Bush said.

The automakers are capable of demonstrating by the end of March that they can restructure into viable companies, he said. If not, the loans would provide time for the carmakers to prepare for an “orderly” Chapter 11 bankruptcy process that offered a better prospect of long-term success, Bush said.

“This restructuring will require meaningful concessions from all involved in the auto industry — management, labor unions, creditors, bondholders, dealers, and suppliers,” he said.

“The actions I’m taking represent a step that we all wish were not necessary,” Bush said. “But given the situation, it is the most effective and responsible way to address this challenge facing our nation.”