Massacre at Tlatelolco : Art Can Help Us Remember 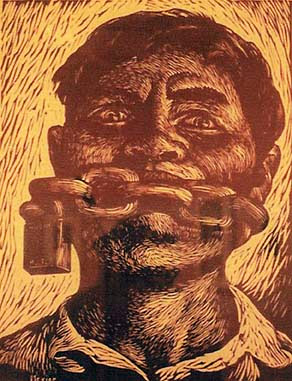 Freedom of Speech (1968) by Adolpho Mexiac. Inspired by the student protest in 1968 in Mexico City and the massacre at Tlatelolco.

This year marks the fortieth anniversary of one of the seminal years in American history.

1968, a year of great turmoil and hope, is being observed and analyzed in many corners of the world. Author Mark Kuransky called 1968 “the year that rocked the world.” I was in the middle of that action, working in the peace movement and helping to document the cascading events for the underground press.

This October Alice Embree and I participated in a panel that was part of “1968 A Global Perspective,” an interdisciplinary conference held at the University of Texas at Austin, that featured keynote speeches by Kathleen Cleaver and Daniel Ellsberg. Though not necessarily in such a formal setting, veterans of that era have inevitably been engaging in a lot of reflection.

Recently I hosted a gathering of close friends, some of whom I knew back in 1968. I was asked about a grouping of small metal sculptures depicting figures in poses of suffering and fear. The elegant set was the work of a Mexican artist named Nuñes; it was given to me years ago by my mother, a prominent artist and gallery owner.

In 1968, in Mexico, as in much of the world, there were massive student-led demonstrations that spread into the society at large. The labor movement and other sectors of society had begun to join in the mobilization against an extremely repressive government, and a grass roots movement for change was emerging.

Rallies late in the year brought hundreds of thousands into the streets of Mexico City. The government, seriously concerned about the country’s image with the Mexico Olympics ten days away, seized control of the National Autonomous University (thenceforth no longer “autonomous”) and ordered the student leaders arrested. 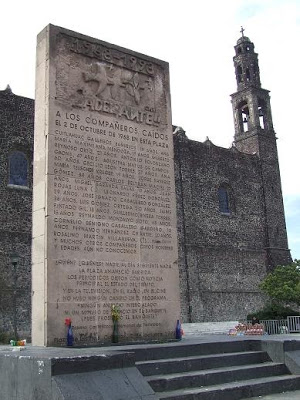 Monument at site of 1968 Mexico City Massacre.
In defiance, students called for another demonstration at the Plaza of the Three Cultures on Oct. 2, 1968, in Mexico City’s Tlatelolco district. A crowd of 15,000 marched through the streets to protest the occupation of the university and 5,000 remained for a rally that evening when demonstrators were suddenly surrounded by troops and tanks, helicopters dropped flares into the crowd and snipers in nearby buildings began shooting at the soldiers, resulting in a police rampage.

The students panicked and soldiers began indiscriminately shooting and bayoneting them. Between 200 and 400 died. Many more were arrested and tortured and the killing continued as soldiers went door to door throughout the neighborhood.

The government claimed that the snipers were student provocateurs. However, documents produced by a major investigation by the Mexican government in 2001 would prove that the shooters were in fact members of the Presidential Guard whose orders were to provoke a riot.

Thanks to inquiries made possible by the Freedom of Information Act, the National Security Archives at George Washington University released papers in 2006 that documented the major role the United States government played in the Tlatelolco events. The CIA helped in the planning of the massacre and the Pentagon provided substantial material support.

In 2006, former President Luis Echeverría Álvarez was formally charged with crimes of genocide resulting from the events but did not go to trial after a court ruled that the statute of limitations had expired.

The Tlatelolco Massacre, commemorated to this day, had a profound effect on public perceptions about the Mexican government and the ruling PRI party. Some say that it forever changed attitudes in Mexico.

Looking back, La noche de Tlatelolco (the name comes from a 1971 book) provides a stark historical capsule of those momentous events of 1968 in the United States and around the world.

The figures by sculptor Nuñes are of the dying and tortured students. 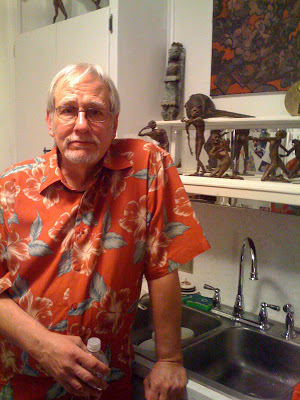 The Rag Blog’s Thorne Dreyer at home. The Tlatelolco sculptures are along the shelf. Photo by Ruth Roberts / The Rag Blog.
[Thorne Dreyer, a pioneering underground journalist in the sixties and a veteran social activist, co-edits The Rag Blog.]

2 Responses to Massacre at Tlatelolco : Art Can Help Us Remember