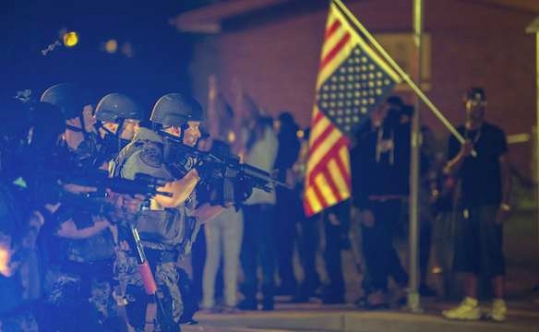 Like many other Americans, I’ve followed events in Ferguson, Missouri, since Officer Darren Wilson gunned down unarmed 18-year old Michael Brown. So many visual accounts of that action brought back a lot of personal memories — most specifically of the 1992 reaction in Los Angeles when police who beat Rodney King III were acquitted of wrong doing in the near fatal attack

That was before cell phones made everyone a potential documentarian of police aggression. But there were video cameras and a nearby resident caught the action on tape through his apartment window. That film clip sparked local, national, and international outrage. So when the verdict came in, that outrage first ignited tempers and then Central Los Angeles as residents turned to protest that soon became violent.

Before the riot was over, 54 people were dead, thousands arrested and millions in property damage sustained. It was the most costly uprising in national history. But not the first.

The more than 100 race “riots” of 1967 produced the renowned Kerner Commission report ordered by President Lyndon Baines Johnson when he named the National Advisory Commission on Civil Disorder. They gave the nation the most sweeping analysis of U.S. race relations and institutionalized inequities ever documented. As a result, 50 years ago Johnson called for a “war against poverty.” It was a battle left unfunded and quickly shelved.

Among the findings of the Kerner Commission were failures of the press, which we heard protestors and others repeat during the Ferguson crisis. The Commission found that “the media — especially television — also have failed to present and analyze to a sufficient extent the basic reasons for the disorders.”

Throughout its 600-page report, the Commission cited the prevalence of these kinds of institutional statistics and called for integration. They devoted Chapter 15 to an analysis of press population and news coverage. Finding content and context missing, they noted their belief that the press “contributed to the black-white schism in this country.”

Moreover, the Commission cited “friction and lack of cooperation between police officers and reporters.” If you followed events through the turmoil, you saw and heard plenty of that including the arrest of journalists just doing their jobs. Most important perhaps, they wrote: “Along with the country as a whole, the press has too long basked in a white world, looking out of it, if at all, with white men’s eyes and a white perspective.”

Half a century ago they said that the press “must make a reality of integration in both their product and their personnel.” But minority participation in print press remains a problem. It has hovered, with minute fluctuations, between 11% and 12% for just under 20 years, despite a pledge in 1978 to reflect in parity the U.S. population by 2000.

What this means is that as newsrooms downsized personnel, they also downsized minority journalists. But even before 2000 — and major newsroom shrinkage — the parity goal was extended to 2025. Television does better, in part because FCC regulations require viewer feedback from area audiences during applications for license renewals..

But it’s not just the professional press. We have some powerful value transmitters too among those who educate the press. For an example close to home, although the UT School of Journalism celebrates its 100th anniversary this year, never in that century has it promoted a minority or a woman to full professor. However, during a time when it and the College of Communication faced a discrimination suit, the College hired and appointed an African-American woman as a full professor, thereby circumventing the entire promotion process, which requires vetting by several committees and administrators.

These kinds of practices provide a subtext environment that visually demonstrates what is valued. In other words, it is more than police department stats, as in Ferguson, that contribute toward the context of inequitable race and ethnic environments. One must consider the profile of institutional power and practice. 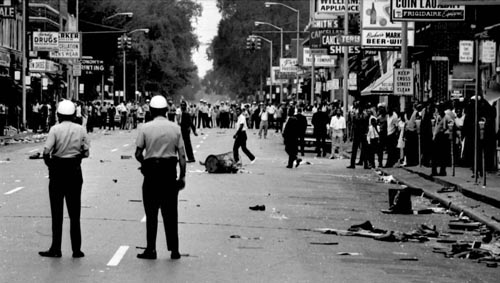 Since the 1960s we’ve seen other protest scripts based on similar reasons: structured disadvantage, resentment, denial, selective police misconduct, officer overreaction in excessive force, communities targeted for violence, major job disparity. Austin too has its examples of underfunded schools, targeted displacement of minority communities, the ”invisiblizing” of low-income people pushed beyond the outskirts of our city and further from jobs. Austin also has its list of shame — its unarmed minority youth victims of police shootings.

Today Ferguson is on a fragile precipice, struggling to balance the right to be heard and police demands for control.

Today Ferguson is on a fragile precipice, struggling to balance the right to be heard and police demands for control. Meanwhile, a broad array of experts provide formulas for peace and/or justice. Many make familiar calls for better police training, elimination of the militarization of police forces, and closer community interaction as part of routine protocol. But I cannot help but wonder, in regards to this list, where history went.

We refuse to learn from the past. We call instead for bigger guns and more rapid deployment. Then too often police look down their gun barrels at people they do not know either personally or as participants in the nation’s development. Instead, stereotypes, often fueled by media, “action” films, and digital games, reinforce those images.

Once embedded in the culture, stereotypes are hard to eliminate. But we do know that education helps. This may be useful to remember when reformers seek to exclude ethnic studies from curriculum. Often those courses are the only ones that augment traditional history classes that can be scant on minority experience. But the time to learn history in context is long before career choices are made. It should start in elementary school when children begin to learn U.S. history through the celebration of holidays and heroes.

Much more comprehensive courses should be mandated in high school and college so we come to know and appreciate the enrichment provided by diversity. And so future law enforcers come to their jobs with a greater understanding of the underlying issues. And strong critical thinking skills that deconstruct stereotypes and make possible empathy for people whose American experience may be different.

Education might be the place to start. Today right wing calls seek to eliminate this information. Meanwhile, in one misguided drive, some jingoists mount efforts to eliminate interdisciplinary, ethnographic “ethnic studies” — African-American, American-Indian, Asian-American and Mexican-American courses as well as Latin American studies. Courses that seek to show students a more inclusive U.S. reality with its triumphs and tragedies.

Some opponents even foster a false claim that by learning anything except a whitewashed version of American history we risk undermining patriotism. Talk about sticking one’s head in the sand!

The most recent Texas battles over text adoption provide cases in point. In both 2010 and 2012 the conservative Texas Board of Education changed content to eliminate, obscure or manicure some key historical events. Board members making those decisions are not academic experts. In 2010 when the Board refused to include Latino figures as role models, no historians, economists or sociologists served on the Board or were consulted. African-American figures were also limited.

As long as tragedies like Ferguson repeat and victims live through violent components of American history, we will watch these replays ever more rapidly on digitized reality. Nevertheless, as a society we seem repeatedly surprised by the anger generated by educational inequity, vanished jobs, ever more income disparities, lost affordable housing, and racial and ethnic profiling of those targeted.

We seem not to hear our fellow Americans until these events replay and coverage lets protestors speak for themselves. And even that often depends on where one turns for information and perspective. Minority news publications are now the most robust in the nation. The New America Media website can introduce readers to those voices. The organization’s directory lists 2,500 publications and describes itself as “the most comprehensive listing of ethnic media, America’s fastest growing segment of journalism reaching more than 60 million Americans.”

If we knew ourselves and the distribution of disadvantage better it would help us become a stronger, more just nation.