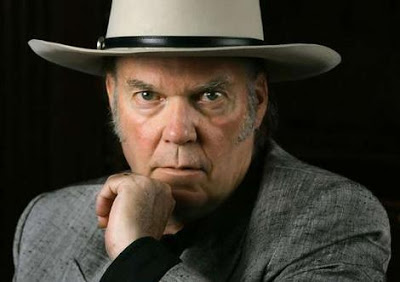 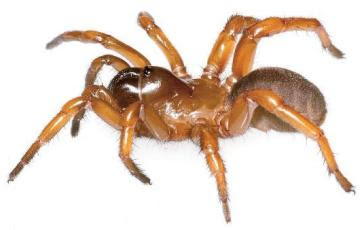 Canadian rocker Neil Young made headlines this week for appearing at the JavaOne conference and for releasing his musical archive on Blu-ray discs. But he was also honored by a East Carolina University (ECU) professor of biology, who named a newly discovered trapdoor spider Myrmekiaphila neilyoungi after the legendary rock star. According to the strict rules established by the International Commission on Zoological Nomenclature, the second word defining a new species must end in ‘i’ if it’s named after a person. So the researcher didn’t break the naming scheme. It also was the case in 2005 when Cornell University named several beetles after Bush, Cheney and Rumsfeld. But read more… 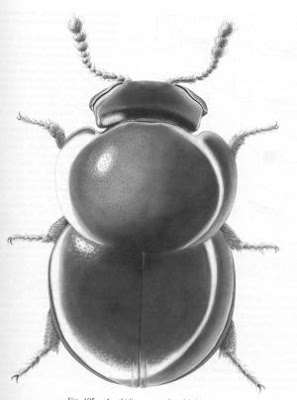 A slime-mold beetle of the genus Agathidium closely related to new species named for President George Bush, Vice President Dick Cheney and Secretary of Defense Donald Rumsfeld. (Drawing by Frances Fawcett, Ithaca, NY)
This new trapdoor spider species has been discovered in 2007 in Jefferson Co., Alabama, by Jason Bond, an ECU professor of biology. “‘There are rather strict rules about how you name new species,’ Bond said. ‘As long as these rules are followed you can give a new species just about any name you please. With regards to Neil Young, I really enjoy his music and have had a great appreciation of him as an activist for peace and justice.’”

Bond co-wrote a paper on this new spider with Norman I. Platnick, curator at the American Museum of Natural History in New York.

This paper was published by American Museum Novitates under the name “Taxonomic review of the trapdoor spider genus Myrmekiaphila (Araneae: Mygalomorphae: Cyrtaucheniidae).”

Here is a link to the abstract. “The mygalomorph spider genus Myrmekiaphila comprises 11 species known only from the southeastern United States. The type species, M. foliata Atkinson, is removed from the synonymy of M. fluviatilis (Hentz) and placed as a senior synonym of M. atkinsoni Simon. A neotype is designated for M. fluviatilis and males of the species are described for the first time. Aptostichus flavipes Petrunkevitch is transferred to Myrmekiaphila. Six new species are described: M. coreyi and M. minuta from Florida, M. neilyoungi from Alabama, M. jenkinsi from Tennessee and Kentucky, and M. millerae and M. howelli from Mississippi.”

For more information, here is a link to the full paper. (PDF format, 32 pages, 8.97 MB). The illustrations above have been extracted from this document.

This entry was posted in RagBlog and tagged Music, Nature, Science. Bookmark the permalink.