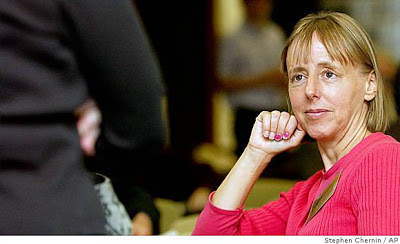 As he prepares to enter the ring of White House politics, President-elect Barack Obama might need to perfect that left jab just as much as his right hook.

Not only can the Democratic president-to-be expect the predictable shots from the conservative right, but eventually a pounding from the left if he doesn’t deliver “change you can believe in” on issues that concern liberal voters – health care reform, an end to the war in Iraq, environmental protections and taking care of the economy and the housing crisis.

“We gave him a 24-hour honeymoon – and that was generous,” joked Medea Benjamin, co-founder of the anti-war group CodePink, Thursday about the chances of Obama’s election silencing protests for the foreseeable future. “We believe in celebrating and then moving on.”

Her grassroots organization has wasted no time doing just that. On Thursday, CodePink members hit five consulates in San Francisco – those representing Bolivia, Venezuela, Syria, Cuba and Iran – delivering flowers, apple pies and cards with a message as much for the president-elect as for the leaders of those nations: “Yes We Can … Live in Peace.”

“We told them we are embracing Obama’s message, and part of that is to push him,” said Benjamin. “He’s getting a lot of backlash on issues like direct talks with preconditions. But that is what the American people voted for – and we will hold him to that.”

With just over two months until the new administration takes office and the transition in full force, Benjamin’s words underscore the challenges facing a president whose historic campaign was bolstered by an unusual coalition that involved the activism, energy and money of unapologetic progressives like Benjamin as well as moderates and independents who are far more conservative.

And many political observers say that means Obama must tack toward the political mainstream to avoid miscalculations made by President Bill Clinton, who veered left and fired up the 1994 Republican backlash and its “Contract with America” – a GOP rebirth scenario Democrats don’t want to see reprised.

Obama supporter Rep. Barbara Lee of Oakland, an icon to liberals because of her long-standing activism on issues such as AIDS/HIV and her opposition to the Iraq war, said that as Democrats celebrate the new president, they are also very aware of issues to be addressed.

“We know that the president-elect – and rightfully so – is going to work to unite the country, and we will have to see how he does that,” said Lee. “I’m not saying it’s going to be easy. If we really want change, you have got to do it differently, you have to accept the process of change and accept that his processes will be more inclusive.”

But, she adds, “we’re certainly not going to lose sight of our goals and our values. … If you look at the progressive promise – 95 percent of what we advocated for, energy independence, infrastructure, health care reform – it’s mainstream,” she said.

At the Edmund G. “Pat” Brown Institute of Public Affairs’ California Policy Issues Conference this week, Melina Abdullah, a professor of Pan-African studies at Cal State University Los Angeles, said that although she and millions of other Democrats sang “It’s a New Day” when Obama was elected, “we need to be very clear … this is a symbolic victory.”

African Americans, particularly, who supported Obama “need to think about … the fact that we are overrepresented in the prison population, that infant mortality in our community looks a lot like developing nations,” and that jobs and economic opportunities are still lacking, she said.

“The only way that change can be substantive is if we push him,” she said of Obama. “Push him on the issues that are important to us, … so institutional racism, institutional oppression can really be eroded in eight years,” she told a crowd of young activists and students at the conference, which was held in Los Angeles.

Andy Stern, who heads the Service Employees International Union – the nation’s largest union, with 2 million members – says that labor fully expects to push ahead on critical interests, such as health care reform.

Especially since SEIU kept a singular focus on the health care issue by spending millions of dollars on advertising that aided the Democrats’ cause – even as tens of thousands of its members provided critical ground troops for his election, he noted.

“Most presidential elections, we are electing a transactional president, someone who comes in and has a set of priorities and bargains with the Congress and tries to find solutions,” Stern said. “Every once in a while, we have a transformational president, who actually changes the rules. And that is the moment where we’re at.

“We say we will have a 21st century economy that can compete globally,” Stern said. “We need a fundamental reworking of our economic theory – and it can’t just be a little stimulus … or to provide health care for children only. It is a moment where we have to transform the way we think.”

Already, there have been complaints from the left regarding Obama’s choice of Rep. Rahm Emanuel as his White House chief of staff. Some liberals have complained that Emanuel was too supportive of the Iraq war, too tied to Wall Street and too connected to entrenched interests to represent change – or the views of the left – in the White House, where he worked in the Clinton administration.

Dan Schnur, a former GOP strategist who now directs the Jesse M. Unruh Institute of Urban Politics at the University of Southern California, said they may have reason to be concerned.

Perils of pull to left

“Rahm Emanuel … understands the perils of a newly elected president who intends to govern from a centrist force and how that president can be pulled leftward,” he told the Brown Institute conference Wednesday.

“Emanuel is one of the five smartest people in American politics. He has that experience, he’s intelligent, he’s tough as nails and he’s one of the few people I know in Washington who would be willing to go down to Capitol Hill” and deliver the message to the left: “If you really want to help this president … then give him some space to enact his agenda,” Schnur said.

Emanuel’s lore includes an incident in which he reportedly sent a dead fish wrapped in newspaper to an adversary, said Schnur.

If Obama is to succeed, he said, “my hope … is that there is a steady stream of such deliveries from one end of Pennsylvania Avenue to another to help President Obama accomplish his agenda.”