Odetta : Bid Farewell to Another Legend 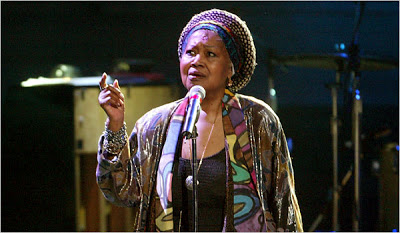 Odetta at Radio City Music Hall in New York for a “Salute to the Blues” Benefit concert in 2003Odetta, Voice of Civil Rights Era, Dies at 77. Photo by Nancy Siesel / NYT.
‘Her voice plunged deep and soared high, and her songs blended the personal and the political, the theatrical and the spiritual.’
By Tim Weiner / December 3, 2008

Odetta, the singer whose deep voice wove together the strongest songs of American folk music and the civil rights movement, died on Tuesday at Lenox Hill Hospital in Manhattan. She was 77.

Odetta sang at coffeehouses and at Carnegie Hall, made highly influential recordings of blues and ballads, and became one of the most widely known folk-music artists of the 1950s and ’60s. She was a formative influence on dozens of artists, including Bob Dylan, Joan Baez and Janis Joplin.

Her voice was an accompaniment to the black-and-white images of the freedom marchers who walked the roads of Alabama and Mississippi and the boulevards of Washington in the quest to end racial discrimination.

Rosa Parks, the woman who started the boycott of segregated buses in Montgomery, Ala., was once asked which songs meant the most to her. She replied, “All of the songs Odetta sings.”

Odetta sang at the march on Washington, a pivotal event in the civil rights movement, in August 1963. Her song that day was “O Freedom,” dating to slavery days: “O freedom, O freedom, O freedom over me, And before I’d be a slave, I’d be buried in my grave, And go home to my Lord and be free.”

Odetta Holmes was born in Birmingham, Ala., on Dec. 31, 1930, in the depths of the Depression. The music of that time and place — particularly prison songs and work songs recorded in the fields of the Deep South — shaped her life.

“They were liberation songs,” she said in a videotaped interview with The New York Times in 2007 for its online feature “The Last Word.” “You’re walking down life’s road, society’s foot is on your throat, every which way you turn you can’t get from under that foot. And you reach a fork in the road and you can either lie down and die, or insist upon your life.”

Her father, Reuben Holmes, died when she was young, and in 1937 she and her mother, Flora Sanders, moved to Los Angeles. Three years later, Odetta discovered that she could sing.

“A teacher told my mother that I had a voice, that maybe I should study,” she recalled. “But I myself didn’t have anything to measure it by.”

She found her own voice by listening to blues, jazz and folk music from the African-American and Anglo-American traditions. She earned a music degree from Los Angeles City College. Her training in classical music and musical theater was “a nice exercise, but it had nothing to do with my life,” she said.

“The folk songs were — the anger,” she emphasized.

In a 2005 National Public Radio interview, she said: “School taught me how to count and taught me how to put a sentence together. But as far as the human spirit goes, I learned through folk music.”

In 1950, Odetta began singing professionally in a West Coast production of the musical “Finian’s Rainbow,” but she found a stronger calling in the bohemian coffeehouses of San Francisco. “We would finish our play, we’d go to the joint, and people would sit around playing guitars and singing songs and it felt like home,” she said.

She began singing in nightclubs, cutting a striking figure with her guitar and her close-cropped hair.

Her voice plunged deep and soared high, and her songs blended the personal and the political, the theatrical and the spiritual. Her first solo album, “Odetta Sings Ballads and Blues,” resonated with an audience hearing old songs made new.

Bob Dylan, referring to that recording, said in a 1978 interview, “The first thing that turned me on to folk singing was Odetta.” He said he heard something “vital and personal,” and added, “I learned all the songs on that record.” It was her first, and the songs were “Mule Skinner,” “Jack of Diamonds,” “Water Boy,” “ ’Buked and Scorned.”

Her blues and spirituals led directly to her work for the civil rights movement. They were two rivers running together, she said in her interview with The Times. The words and music captured “the fury and frustration that I had growing up.”

Her fame hit a peak in 1963, when she marched with the Rev. Dr. Martin Luther King Jr. and performed for President John F. Kennedy. But after King was assassinated in 1968, the wind went out of the sails of the civil rights movement and the songs of protest and resistance that had been the movement’s soundtrack. Odetta’s fame flagged for years thereafter.

In 1999 President Bill Clinton awarded Odetta the National Endowment for the Arts Medal of the Arts and Humanities.

Odetta was married three times: to Don Gordon, to Gary Shead, and, in 1977, to the blues musician Iverson Minter, known professionally as Louisiana Red. The first two marriages ended in divorce; Mr. Minter moved to Germany in 1983 to pursue his performing career.

She was singing and performing well into the 21st century, and her influence stayed strong.

In April 2007, half a century after Bob Dylan first heard her, she was on stage at a Carnegie Hall tribute to Bruce Springsteen. She turned one of his songs, “57 Channels,” into a chanted poem, and Mr. Springsteen came out from the wings to call it “the greatest version” of the song he had ever heard.

Reviewing a December 2006 performance, James Reed of The Boston Globe wrote: “Odetta’s voice is still a force of nature — something commented upon endlessly as folks exited the auditorium — and her phrasing and sensibility for a song have grown more complex and shaded.”

The critic called her “a majestic figure in American music, a direct gateway to bygone generations that feel so foreign today.”

1 Response to Odetta : Bid Farewell to Another Legend