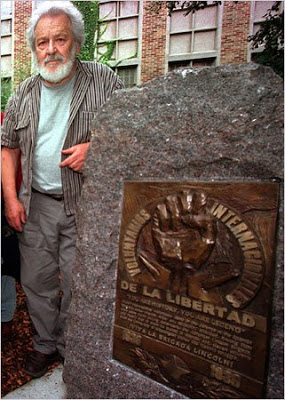 Abe Osheroff in October 1998 at the University of Washington. Photo by Larry Davis / NYT.
‘Abe Osheroff: One Foot in the Grave, the other Still Dancing.’
By Robert Jensen / The Rag Blog / December 3, 2008

In 2000 and 2001, audiences at the University of Texas heard from one of many unsung heroes of the progressive movements of the 20th century, the late Abe Osheroff. Through a new documentary that chronicles his life and philosophy, Osheroff will again come to Austin.

Most people knew Osheroff as an activist — from the frontlines of the Spanish Civil War to the picket lines of the U.S. labor movement, from the struggles for civil rights in Mississippi to the work for human rights in Nicaragua. For most of his 92 years, Osheroff threw himself into the fray with rare energy and enthusiasm. In this documentary, Osheroff reflects on the meaning of that activism and the ideas that animated his actions. A truly organic intellectual, he shares the wisdom built up over a lifetime of commitment to the “radical humanism” that defined his politics and philosophy.

Screening of the documentary film
‘Abe Osheroff: One Foot in the Grave, the other Still Dancing’

Following the film, two UT professors who knew and worked with Osheroff, Miguel Ferguson (social work) and Robert Jensen (journalism) will lead a discussion about his life and work.

To learn more about Abe Osheroff: Go here for an interview and here for general information about his life.

This event, which is free and open to the public, is sponsored by the Senior Fellows honors program of the College of Communication. TCC is next to the LBJ School at Red River and Dean Keeton. There is free convenient parking for motorists in the large lots along Red River. The conference center is on Bicycle Route 42.

1 Response to Austin : The Radical Humanism of Abe Osheroff