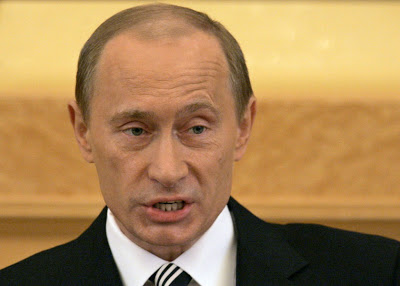 Mikheil Saakashvili’s decision to use the opening of the Olympic Games to cover Georgia’s invasion of its breakaway province of South Ossetia must rank in stupidity with Gamal Abdel-Nasser’s decision to close the Straits of Tiran to Israeli ships.

After shelling and attacking what he claims is his own country, killing scores of his own Ossetian citizens and sending tens of thousands fleeing into Russia, Saakashvili’s army was whipped back into Georgia in 48 hours.

Vladimir Putin took the opportunity to kick the Georgian army out of Abkhazia, as well, to bomb Tbilisi and to seize Gori, birthplace of Stalin.

Reveling in his status as an intimate of George Bush, Dick Cheney and John McCain, and America’s lone democratic ally in the Caucasus, Saakashvili thought he could get away with a lightning coup and present the world with a fait accompli.

Mikheil did not reckon on the rage or resolve of the Bear.

American charges of Russian aggression ring hollow. Georgia started this fight — Russia finished it. People who start wars don’t get to decide how and when they end.

True. But did we not authorize Israel to bomb Lebanon for 35 days in response to a border skirmish where several Israel soldiers were killed and two captured? Was that not many times more “disproportionate”?

Russia has invaded a sovereign country, railed Bush. But did not the United States bomb Serbia for 78 days and invade to force it to surrender a province, Kosovo, to which Serbia had a far greater historic claim than Georgia had to Abkhazia or South Ossetia, both of which prefer Moscow to Tbilisi?

Is not Western hypocrisy astonishing?

When the Soviet Union broke into 15 nations, we celebrated. When Slovenia, Croatia, Macedonia, Bosnia, Montenegro and Kosovo broke from Serbia, we rejoiced. Why, then, the indignation when two provinces, whose peoples are ethnically separate from Georgians and who fought for their independence, should succeed in breaking away?

Are secessions and the dissolution of nations laudable only when they advance the agenda of the neocons, many of who viscerally detest Russia?

That Putin took the occasion of Saakashvili’s provocative and stupid stunt to administer an extra dose of punishment is undeniable. But is not Russian anger understandable? For years the West has rubbed Russia’s nose in her Cold War defeat and treated her like Weimar Germany.

When Moscow pulled the Red Army out of Europe, closed its bases in Cuba, dissolved the evil empire, let the Soviet Union break up into 15 states, and sought friendship and alliance with the United States, what did we do?

American carpetbaggers colluded with Muscovite Scalawags to loot the Russian nation. Breaking a pledge to Mikhail Gorbachev, we moved our military alliance into Eastern Europe, then onto Russia’s doorstep. Six Warsaw Pact nations and three former republics of the Soviet Union are now NATO members.

Bush, Cheney and McCain have pushed to bring Ukraine and Georgia into NATO. This would require the United States to go to war with Russia over Stalin’s birthplace and who has sovereignty over the Crimean Peninsula and Sebastopol, traditional home of Russia’s Black Sea fleet.

When did these become U.S. vital interests, justifying war with Russia?

The United States unilaterally abrogated the Anti-Ballistic Missile treaty because our technology was superior, then planned to site anti-missile defenses in Poland and the Czech Republic to defend against Iranian missiles, though Iran has no ICBMs and no atomic bombs. A Russian counter-offer to have us together put an anti-missile system in Azerbaijan was rejected out of hand.

We built a Baku-Tbilisi-Ceyhan pipeline from Azerbaijan through Georgia to Turkey to cut Russia out. Then we helped dump over regimes friendly to Moscow with democratic “revolutions” in Ukraine and Georgia, and tried to repeat it in Belarus.

Americans have many fine qualities. A capacity to see ourselves as others see us is not high among them.

Imagine a world that never knew Ronald Reagan, where Europe had opted out of the Cold War after Moscow installed those SS-20 missiles east of the Elbe. And Europe had abandoned NATO, told us to go home and become subservient to Moscow.

How would we have reacted if Moscow had brought Western Europe into the Warsaw Pact, established bases in Mexico and Panama, put missile defense radars and rockets in Cuba, and joined with China to build pipelines to transfer Mexican and Venezuelan oil to Pacific ports for shipment to Asia? And cut us out? If there were Russian and Chinese advisers training Latin American armies, the way we are in the former Soviet republics, how would we react? Would we look with bemusement on such Russian behavior?