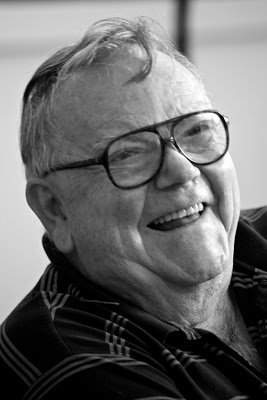 
Brad Buchholz of the Austin American-Statesman called Ronnie Dugger “the godfather of progressive journalism in Texas.” Dugger was the founding editor of The Texas Observer from 1954 to 1961, and later served as the Observer’s publisher, spending more than 40 years with the crusading Texas tabloid.

The Texas Observer is a muckraking journal that has broken stories on major scandals and played an influential role in Texas politics. Based in Austin, the Observer, in its own words, “specializes in investigative, political and social-justice reporting from the strangest state in the Union.” The New York Review of Books referred to the Observer as an “outpost of reason in the Southwest.”

In 1966, Dugger also proposed and co-founded the Alliance for Democracy, a national grassroots anti-big-corporate organization.

Ronnie Dugger, who won the 2011 George Polk Award for his career in journalism, has influenced and mentored such progressive Texas journalists as Willie Morris, Molly Ivins, Billy Lee Brammer, Lawrence Goodwyn, Kaye Northcott, and Jim Hightower. He recently moved back to Austin from Cambridge, Mass.

Dugger is the author of Dark Star, Hiroshima Reconsidered (World, 1967), Our Invaded Universities (W.W. Norton, 1973), The Politician: The Life and Times of Lyndon Johnson (W.W. Norton, 1982), and On Reagan (McGraw Hill, 1983), and edited Three Men in Texas: Bedichek, Webb, and Dobie for UT Press. He has also written for Harper’s, Atlantic, The Nation, The New Yorker, and The Progressive.

Dugger has taught at the University of Virginia, Hampshire College, and the University of Illinois, and has held fellowships from the Rockefeller Foundation, the National Endowment for the Humanities, the Woodrow Wilson International Center for Scholars, and the Shorenstein Center at the Kennedy School, Harvard.

Dugger shared with host Thorne Dreyer some of the rich history of the Observer and of Texas progressive politics and journalism, marked by such seminal — and colorful — figures as Frankie Carter Randolph, U.S. Rep. Bob Eckhardt, John Henry Faulk, Willie Morris, and Molly Ivins.

Once, when Molly Ivins — who would become widely recognized as a national treasure for her special brand of populist Texas wit — was editing the Observer, Dugger asked her, “Molly, when are you gonna get serious?” Ivins replied (“quick as a whip”): “When we have a chance to win.”

On the show, Dugger discussed the legacy of the McCarthy era, the looming (both then and now) threat of nuclear war — an issue that he has always considered preeminent — and the Johnson presidency, which, he points out, made history with its courageous progressive domestic agenda. “Of course,” Dugger says, “the Vietnam War not only ruined that, but killed two million people.”

We discussed the way Lyndon’s unique saga was variously treated by the erudite Willie Morris in his heralded memoir North Toward Home and by Billy Lee Brammer, whose pre-gonzo novel, The Gay Place, Dugger called “one of the best novels written by anybody in Texas.” Brammer was Dugger’s first associate editor at the Observer, and Morris would later edit the Observer and then gain more fame as the editor of Harper’s.

And Dugger recounted a remarkable incident in 1955 that he later wrote about in an article titled, “LBJ, The Texas Observer & Me.” Then-Senator Lyndon Johnson summoned Ronnie to the LBJ Ranch with an offer — “something of a quid pro quo.” After inquiring about the Observer‘s circulation (“Oh, about 6,000,” Dugger told him), Johnson made his proposal: “Stick with me and we’ll make it 60,000.”

“Johnson was trying to bribe me, basically,” Dugger remembers. “Sing my praises, and we’ll make the Observer a whamdinger.” Of course Dugger, who according to Willie Morris became “one of Johnson’s main public antagonists,” chose to decline the deal. According to Morris, Ronnie Dugger “distrusted the compromises of political power and saw his own role in Texas as that of the social critic, the journalistic conscience, the polemicist.”

Ronnie Dugger also shared with the Rag Radio audience his not-so-optimistic take on the current political scene. “I think both political parties have descended pretty low,” he said. And the Supreme Court “has opened huge corporate money vaults,” with “the scandalous idea that corporations have the same rights as persons.” Dugger fears that “we’re now an imitation democracy governed by a corporate oligarchy… and a bought Congress.”

“Congress, with honorable exceptions, is now a whorehouse,” he said. 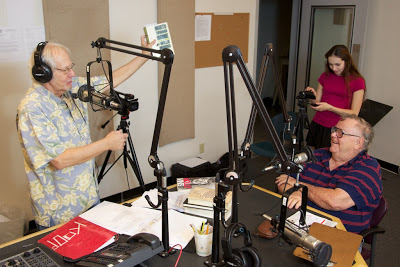 Above (and in inset photo): Thorne Dreyer, left, and Ronnie Dugger at the KOOP studios. Behind Dugger is Grace Alfar of ZGraphix. Photos by Alan Pogue / The Rag Blog.