Robert Jensen : Is Obama a Socialist? 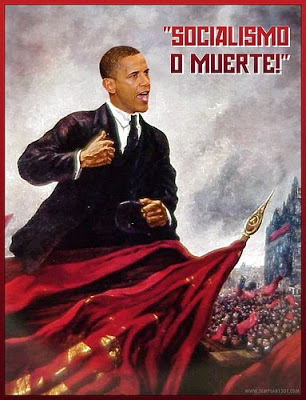 Obama the socialist. The right wing blogosphere overflows with such imagery.
Is Obama a socialist?

Reflection on the degradation of politics and the ecosystem

For months, leftists have been pointing out the absurdity of the claim that Barack Obama is a socialist. But no matter how laughable, the claim keeps popping up, most recently in the form of the Republican Party chairman’s warning of “a socialist power grab” by Democrats.

Within the past year, Republican Sen. Jim DeMint of South Carolina has called Obama “the world’s best salesman of socialism.” Conservative economist Donald J. Boudreaux of George Mason University has acknowledged that Obama isn’t really a socialist, but warns that the “socialism lite” of such politicians “is as specious as is classic socialism.”

Silly as all this may be, it does provide an opportunity to continue talking about the promise and the limits of socialism in a moment when the economic and ecological crises are so serious. So, let’s start with the basics.

As with any complex political idea, socialism means different things to different people. But there are core concepts in socialist politics that are easy to identify, including

Obama has never argued for such principles, and in fact consistently argues against them, as do virtually all politicians who are visible in mainstream U.S. politics. This is hardly surprising, given the degree to which our society is dominated by corporations, the primary institution through which capitalism operates.

Obama is not only not a socialist, he’s not even a particularly progressive capitalist. He is part of the neo-liberal camp that has undermined the limited social-democratic character of the New Deal consensus, which dominated in the United States up until the so-called “Reagan revolution.”

While Obama’s stimulus plan was Keynesian in nature, there is nothing in administration policy to suggest he is planning to move to the left in any significant way. The crisis in the financial system provided such an opportunity, but Obama didn’t take it and instead continued the transfer of wealth to banks and other financial institutions begun by Bush.

Looking at his economic advisers, this is hardly surprising. Naming neo-liberal Wall Street boys such as Timothy Geithner as secretary of the treasury and Lawrence Summers as director of the National Economic Council was a clear signal to corporate America that the Democrats would support the existing distribution of power and wealth. And that’s where his loyalty has remained.

In short: Obama and some Democrats have argued for a slight expansion of the social safety net, which is generally a good thing in a society with such dramatic wealth inequality and such a depraved disregard for vulnerable people. But that’s not socialism. It’s not even socialism lite. It’s capitalism — heavy, full throttle, and heading for the cliff.

In reaction to the issues of the day, a socialist would fight to nationalize the banks, create a national health system, and end imperialist occupations in Iraq and Afghanistan. That the right wing can accuse Obama of being a socialist when he does none of those things is one indication of how impoverished and dramatically skewed to the right our politics has become.

In most of the civilized world, discussions of policies based in socialist principles are part of the political discourse, while here they are bracketed out of any serious debate. In a recent conversation with an Indonesian journalist, I did my best to explain all this, but she remained perplexed. How can people take seriously the claim that he’s socialist, and why does applying that label to a policy brand it irrelevant? I shrugged. “Welcome to the United States,” I said, “a country that doesn’t know much about the world or its own history.”

Let’s take a moment to remember. Socialist and other radical critiques of capitalism are very much a part of U.S. history. In the last half of the 19th century, workers in this country organized against expanding corporate power and argued for worker control of factories. These ideas were not planted by “outside agitators”; immigrants at the end of the 19th and early 20th centuries contributed to radical thought and organizing, but U.S. movements grew organically in U.S. soil.

Business leaders saw this as a threat and responded with private and state violence. The Red Scare of the 19-teens and ‘20s tried to wipe out these movements, with considerable success. But radical movements rose again during the Great Depression, eventually winning the right to organize.

In the boom times after WWII, management was willing to buy off labor (for a short time, it turned out) with a larger slice of the pie in a rapidly expanding economy, and in the midst of Cold War hysteria the radical elements of the mainstream labor movement were purged. But radical ideas remain, nurtured by small groups and individuals around the country.

One of the reasons that “socialist” can be used as a slur in the United States is because that history is rarely taught. If people never hear about socialist traditions in our history, it’s easy to believe that somehow socialism is incompatible with the U.S. political and social system.

Add to this the classic tactic of presenting “false alternatives” — if the Soviet Union was the epitome of a socialist state and the only other option is capitalism, then capitalism is preferable to the totalitarianism of socialism — and it is easy to see how people might wonder if Obama is a Red to be Scared of.

This long-running campaign to eliminate critiques and/or critics of capitalism — using occasional violence and relentless propaganda — has always been a threat to basic human values and democracy. The promotion of greed and crass self-interest as the defining characteristics of human life deforms all of us and our society. The concentration of wealth in capitalism undermines the democratic features of the society. Socialist principles provide a starting place to craft a different world, based on solidarity and an egalitarian distribution of wealth.

But capitalism is not only inhuman and anti-democratic; it’s also unsustainable, and if we don’t come to terms with that one, not much else matters. Capitalism is an economic system based on the concept of unlimited growth, yet we live on a finite planet. Capitalism is, quite literally, crazy.

But on this question it’s not fair to focus only on capitalism. Industrial systems — whether operating within capitalism, fascism, or communism — are unsustainable. The problem is not just the particular organization of an economy but any economic model based on high-energy technology, endless extraction, and the generation of massive amounts of toxic waste. Extractive economies ignore the health of the underlying ecosystem, and a socialist industrial system would pose the same threat. The possibility of a decent future, of any future at all, requires that we renounce that model.

This reminds us that one of capitalism’s few legitimate claims — that it is the most productive economic system in human history in terms of output — is hardly a positive. The levels of production in capitalism, especially in the contemporary mass consumption era, are especially unsustainable.

We are caught in a death spiral, in which growth is needed to pull out of a recession/depression, but such growth only brings us closer to the edge of the cliff, or sinks the ship faster, or speeds the unraveling of the fabric of life. Pick your metaphor, but the trajectory is clear. The only question is the timing and the nature of the collapse. No amount of propaganda can erase this logic: Unsustainable systems can’t be sustained.

To demand that we continue on this path is to embrace a kind of collective death wish. So, while I endorse socialist principles, I don’t call myself a socialist, to mark a break with the politics associated with the industrial model that shapes our world. I am a radical feminist anti-capitalist who opposes white supremacy and imperialism, with a central commitment to creating a sustainable human presence on the planet. I don’t know any single term to describe those of us with such politics.

I do know that the Republican Party is not interested in this kind of politics, and neither is the Democratic Party. Both are part of a dying politics in a dying culture that, if not radically changed, will result in a dead planet, at least in terms of a human presence.

So, socialism alone isn’t the answer. In addition to telling the truth about the failures of capitalism we have to recognize the failures of the industrial model underlying traditional notions of socialism. We have to take seriously the deep patriarchal roots of all this and the tenacity of white supremacy. We have to condemn imperialism, whether the older colonial style or the contemporary American version, as immoral and criminal. We have to face the chilling facts about the degree to which humans have degraded the capacity of the ecosystem to sustain our own lives.

I’m not waiting for Obama or any other politician to speak about these things. I am, instead, working in local groups — connected in national and international networks — to create alternatives. There is no guarantee of success, but it is the work that I believe matters most. And it is joyful work when done in collaboration with others who share this spirit.

But to get there, we have to find the strength to break from the dominant culture, which is difficult. On that question, I’d like to conclude by quoting Scripture. In the Sermon on the Mount, Jesus said:

I end with Scripture not because I think everyone should look to my particular brand of radical, non-orthodox Christianity for inspiration, but because I think the task before us demands more than new policies. To face this moment in history requires a courage that, for me, is bolstered by tapping into the deepest wisdom in our collective history, including that found in various religious traditions. We have to ask ourselves what it means to be human in this moment, a question that is deeply political and at the same time beyond politics.

At the core of these traditions is the call for humility about the limits of human knowledge and a passionate commitment to justice, both central to finding within ourselves the strength to pass through that narrow gate.

My advice to any of you who want to be part of a decent future: Find that strength wherever you find it, and step up to the narrow gate.

8 Responses to Robert Jensen : Is Obama a Socialist?