Robert Reich : The Heart of the Economic mess. 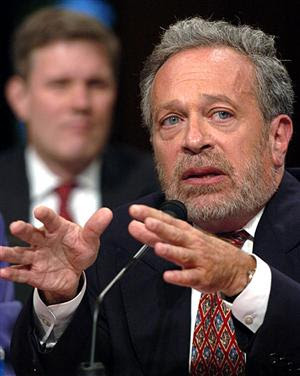 Former labor secretary Robert B. Reich.
Most Americans can no longer maintain their standard of living. And the core problem isn’t the housing crisis or rising oil and food prices.
By Robert B. Reich / August 4, 2008.

The Federal Reserve Board’s “beige book” for June and July offers a clear explanation for why the economy has slowed to a crawl. It shows American consumers cutting way back on their purchases of everything from food to cars, appliances and name-brand products. As they do so, employers inevitably are cutting back on the hours they need people to work for them, thereby contributing to a downward spiral.

The normal remedies for economic downturns are necessary. But even an adequate stimulus package will offer only temporary relief this time, because this isn’t a normal downturn. The problem lies deeper. Most Americans can no longer maintain their standard of living. The only lasting remedy is to improve their standard of living by widening the circle of prosperity.

The heart of the matter isn’t the collapse in housing prices or even the frenetic rise in oil and food prices. These are contributing to the mess, but they are not creating it directly. The basic reality is this: For most Americans, earnings have not kept up with the cost of living. This is not a new phenomenon, but it has finally caught up with the pocketbooks of average people. If you look at the earnings of nongovernment workers, especially the hourly workers who comprise 80 percent of the work force, you’ll find they are barely higher than they were in the mid-1970s, adjusted for inflation. The income of a man in his 30s is now 12 percent below that of a man his age three decades ago. Per-person productivity has grown considerably since then, but most Americans have not reaped the benefits of those productivity gains. They’ve gone largely to the top.

Inequality on this scale is bad for many reasons, but it is also bad for the economy. The wealthy devote a smaller percentage of their earnings to buying things than the rest of us because, after all, they’re rich. They already have most of what they want. Instead of buying, the very wealthy are more likely to invest their earnings wherever around the world they can get the highest return.

This underlying earnings problem has been masked for years as middle- and lower-income Americans found means to live beyond their paychecks. But they have now run out of such coping mechanisms. As I’ve noted elsewhere, the first coping mechanism was to send more women into paid work. Most women streamed into the work force in the 1970s less because new professional opportunities opened up to them than because they had to prop up family incomes. The percentage of American working mothers with school-age children has almost doubled since 1970, to more than 70 percent. But there’s a limit to how many mothers can maintain paying jobs.

So Americans turned to a second way of spending beyond their hourly wages: They worked more hours. The typical American now works more each year than he or she did three decades ago. Americans became veritable workaholics, putting in 350 more hours a year than the average European, more even than the notoriously industrious Japanese.

But there’s also a limit to how many hours Americans can put into work, so Americans turned to a third coping mechanism: They began to borrow. With housing prices rising briskly through the 1990s and even faster from 2002 to 2006, they turned their homes into piggy banks by refinancing home mortgages and taking out home-equity loans. But this third strategy also had a built-in limit. And now, with the bursting of the housing bubble, the piggy banks are closing. Americans are reaching the end of their ability to borrow, and lenders have reached the end of their capacity to lend. Credit-card debt, meanwhile, has reached dangerous proportions. Banks are now pulling back.

As a result, typical Americans have run out of coping mechanisms to keep up their standard of living. That means there’s not enough purchasing power in the economy to buy all the goods and services it’s producing. We’re finally reaping the whirlwind of widening inequality and ever-more-concentrated wealth.

The only way to keep the economy going over the long run is to increase the real earnings of middle-class and lower-middle-class Americans. The answer is not to protect jobs through trade protection — that would only drive up the prices of everything purchased from abroad. Most routine jobs are being automated anyway. Nor is the answer to give tax breaks to the very wealthy and to giant corporations in the hope they will trickle down to everyone else. We’ve tried that, and it hasn’t worked. Nothing has trickled down.

Rather, the long-term answer is for us to invest in the productivity of our working people — enabling families to afford health insurance and have access to good schools and higher education — while also rebuilding our infrastructure and investing in the clean energy technologies of the future. We must also adopt progressive taxes at the federal, state and local levels. In other words, we must rebuild the American economy from the bottom up. It cannot be rebuilt from the top down.

Robert Reich is a professor of public policy at the Richard and Rhoda Goldman School of Public Policy at the University of California at Berkeley. He was secretary of labor in the Clinton administration.