The Tire-Gauge Solution : No Joke 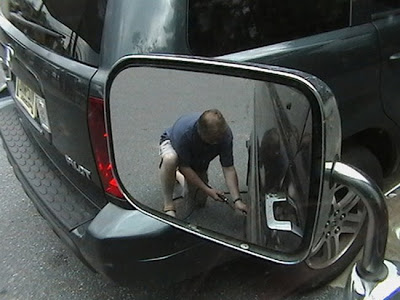 God, a week to prove my great-grand-uncle who was Harry Truman’s “Eminence Grise” right:

“The only ‘Good Republicans’ are pushing up daisies.”

They were for it till they thought they could swing a vote from a drooler.

Just like the way they dissed real heroes 4 years ago with their “Purple Heart bandaids.”

I just want to shoot them.

Here’s a bit of the article:

How out of touch is Barack Obama? He’s so out of touch that he suggested that if all Americans inflated their tires properly and took their cars for regular tune-ups, they could save as much oil as new offshore drilling would produce. Gleeful Republicans have made this their daily talking point; Rush Limbaugh is having a field day; and the Republican National Committee is sending tire gauges labeled “Barack Obama’s Energy Plan” to Washington reporters.

But who’s really out of touch? The Bush Administration estimates that expanded offshore drilling could increase oil production by 200,000 bbl. per day by 2030. We use about 20 million bbl. per day, so that would meet about 1% of our demand two decades from now. Meanwhile, efficiency experts say that keeping tires inflated can improve gas mileage 3%, and regular maintenance can add another 4%. Many drivers already follow their advice, but if everyone did, we could immediately reduce demand several percentage points. In other words: Obama is right.

Politics ain’t beanbag, and Obama has defended himself against worse smears. The real problem with the attacks on his tire-gauge plan is that efforts to improve conservation and efficiency happen to be the best approaches to dealing with the energy crisis, the cheapest, cleanest, quickest and easiest ways to ease our addiction to oil, reduce our pain at the pump and address global warming. It’s a pretty simple concept: if our use of fossil fuels is increasing our reliance on Middle Eastern dictators while destroying the planet, maybe we ought to use less.

The RNC is trying to make the tire gauge a symbol of unseriousness, as if only the fatuous believed we could reduce our dependence on foreign oil without doing the bidding of Big Oil. But the tire gauge is really a symbol of a very serious piece of good news: we can use significantly less energy without significantly changing our lifestyle. The energy guru Amory Lovins has shown that investment in “nega-watts”  reduced electricity use through efficiency improvements is much more cost-effective than investment in new megawatts, and the same is clearly true of nega-barrels. It might not fit the worldviews of right-wingers who deny the existence of global warming and insist that reducing emissions would destroy our economy, or of left-wing Earth-firsters who insist that maintaining our creature comforts would destroy the world, but there’s a lot of simple things we can do on the demand side before we start rushing to ratchet up supply.