This collection of essays, poetry, and art, much of it from the pages of CounterPunch, is provocative
and enlightening. 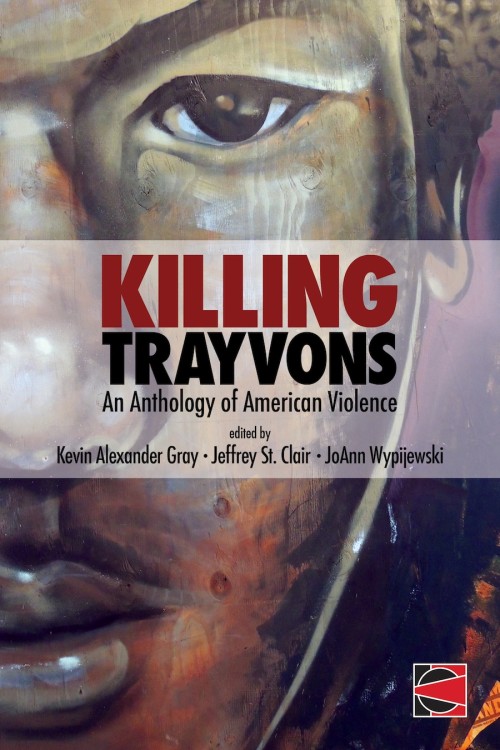 Much of the writing in Killing Trayvons was first
published in CounterPunch.

In 1771 in the North Carolina colony, Justice Martin Howard condemned a grand jury that refused to consider a murder charge after a white man was accused of the murder of his African slave. Apparently, the grand jury did not consider the killing by a white man of a Negro slave to be murder.

In 2012, the murder of Trayvon Martin by George Zimmerman followed by Zimmerman’s subsequent acquittal of the crime took much of white United States by surprise. These Americans had convinced themselves that Black men were treated the same as every other resident of the United States and, if they were killed for no apparent reason other than a white person’s fear, then justice would be done in the name of the wrongly murdered African-American. However, the murder of a Black man in the U.S. by a man considered white is apparently still not murder.

Although most U.S. residents understand that racism exists among certain unenlightened segments of their society, most are also convinced that this racism is not systemic. Despite the best attempts of most of the mainstream media to tell the world otherwise, Trayvon Martin’s murder and George Zimmerman’s trial laid that myth to rest. The ugly wound of American racism was ripped and ruthlessly torn open for the world to see.

Only a minority of writers examined the murder and trial of Trayvon Martin systemically.

Naturally, millions of words were written about the situation. Many were racist and full of hate for the victim. I would like to believe that there were more that sympathized with the victim’s family and hoped for justice. Only a minority of the writers expressing themselves on the murder and subsequent trial of the killer examined the incident systemically. Of that group, even fewer saw the story as an example of the way the system works. Instead, those who did analyze it systemically saw it as a systemic failure.

One venue where Trayvon Martin’s murder and George Zimmerman’s acquittal were viewed through a lens that saw these events as unfortunate examples of how the system tends to work was the online left-libertarian journal Counterpunch. Writers like Kevin Alexander Gray, Jesse Jackson, and Alexander Cockburn wrote hard-hitting articles and essays examining the nature of a society that supports so-called “Stand Your Ground” laws and the racist application of those laws.

Furthermore, Counterpunch writers opined that the killing of Martin and hundreds of other Black youth by white-skinned Americans and their police forces over the last couple decades was not an anomaly, but part of the way things are supposed to be run in the United States of America.

The commentary was not dogmatic and rhetorical, like its opposite in the primarily right-wing media.

The commentary was not dogmatic and rhetorical, like its opposite in the primarily right-wing media. Instead, it was reasoned, analytical, and in the best tradition of social critics like W.E.B DuBois, James Baldwin, and Frederick Douglass, to name the first three that come to mind. Combining a nuanced understanding of U.S. history and society, a left anti-racist critique, and a desire for progressive social change, it is safe to say that these writers took the conversation around Trayvon Martin’s murder to a higher political and intellectual level than virtually any other media source.

This coterie of essayists and journalists who penned the material noted above have been joined by poets and artists to create the recently released Killing Trayvons: An Anthology of American Violence. This collection includes some pieces that previously appeared in Counterpunch and others that were written for this volume. Selectively dispersed among the commentary and articles are poems from the likes of Rita Dove and June Jordan, wonderfully drawn art details from a mural in Oakland, California, bits of the trial transcript from the Florida courtroom where George Zimmerman was tried, and even an excerpt from the speech by Barack Obama where he stated that, “If I had a son, he would look like Trayvon.”

Killing Trayvons is edited by longtime Counterpunch editor Jeffrey St. Clair, writer Joanne Wypijewski, and writer/activist Kevin Alexander Gray. The work they have done in compiling this anthology is superb. The writing is provocative, enlightening, and just plain pleasurable to peruse. Every piece between the book’s covers peels a layer from the scab of American racism and reminds the reader of the words of Black liberationist H. Rap Brown: “Violence is American as apple pie.”

If there were one current text concerned with U.S. racism in the “post-racial” world to recommend, this is it.