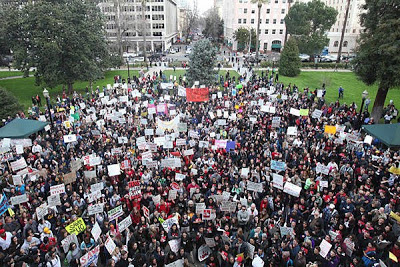 “It is easier to build strong children than to repair broken men.” — Frederick Douglass

On Thursday, I was proud to take part in a student walkout at the University of Maryland in defense of public education. It was just one link in a National Day of Action that saw protests in more than 32 states across the country.

I am not a student, and haven’t been since those innocent days when Monica Lewinsky mattered, but I was asked to come speak at a post walkout teach-in about the way sports is used to attack public education. It might sound like a bizarre topic, but it’s the world that students see every day.

At the University of Maryland, as tuition has been hiked and classes cut, football coach Ralph Friedgen makes a base salary of 1.75 million bucks, which would be outrageous even if the team weren’t two-steps past terrible. Friedgen also gets perks like a $50,000 bonus if none of his players are arrested during the course of the season.

Ground zero of the student protest movement is the University of California at Berkeley. Over at Berkeley, students are facing 32% tuition hikes, while the school pays football coach Jeff Tedford 2.8 million dollars a year and is finishing more than 400 million in renovations on the football stadium. This is what students see: boosters and alumni come first, while they’ve been instructed to cheer their teams, pay their loans, and mind their business.

The counterargument is that college athletic departments fund themselves and actually put money back into a school’s general fund. This is simply not true. The October Knight Commission report of college presidents stated that the 25 top football schools had revenues on average of $3.9 million in 2008. The other 94 ran deficits averaging $9.9 million. When athletic departments run deficits, it’s not like the football coach takes a pay cut.

In other words, if the team is doing well, the entire school benefits. If the football team suffers, the entire school suffers. This, to put it mildly, is financial lunacy. A school would statistically be better off if it took its endowment to Vegas and just bet it all on black.

If state colleges are hurting, your typical urban public school is in a world of pain with budgets slashed to the bone. Politicians act like these are problems beyond their control like the weather. (“50% chance of sun and a 40% chance of losing music programs.”)

In truth, they are the result of a comprehensive attack on public education that has seen the system starved. One way this has been implemented is through stadium construction, the grand substitute for anything resembling an urban policy in this country.

Over the last generation, we’ve seen 30 billion in public funds spent on stadiums. They were presented as photogenic solutions to deindustrialization, declining tax bases, and suburban flight. The results are now in and they don’t look good for the home teams. University of Maryland sports economists Dennis Coates and University of Alberta Brad R. Humphreys studied stadium funding over 30 years and failed to find one solitary example of a sports franchise lifting or even stabilizing a local economy.

They concluded the opposite: “a reduction in real per capita income over the entire metropolitan area… Our conclusion, and that of nearly all academic economists studying this issue, is that professional sports generally have little, if any, positive effect on a city’s economy.”

These projects achieve so little because the jobs created are low wage, service sector, seasonal employment. Instead of being solutions of urban decay, the stadiums have been tools of organized theft: sporting shock doctrines for our ailing cities.

With crumbling schools, higher tuitions, and an Education Secretary in Arne Duncan who seems more obsessed with providing extra money for schools that break their teachers unions, it’s no wonder that the anger is starting to boil over. It can also bubble up in unpredictable ways.

On Wednesday night, after the University of Maryland men’s basketball team beat hated arch-rival Duke, students were arrested after pouring into the streets surrounding the campus. In years past, these sporting riots have been testosterone run amok, frat parties of burning mattresses and excessive inebriation. This year it was different, with police needing to use pepper spray and horses to quell the 1,500 students who filled Route 1. In response, students chanted, “Defense! Defense!”

At the Thursday teach in, I said to the students that I didn’t think there was anything particularly political or interesting about a college sports riot. One person shot his hand up and said, “It wasn’t a riot until the cops showed up.” Everyone proceeded to applaud.

I was surprised at first that these politically minded students would be defending a post-game melee, but no longer. The anger is real and it isn’t going anywhere. While schools are paying football coaches millions and revamping stadiums, students are choosing between dropping out or living with decades of debt. One thing is certain: it aint a game.

[The Nation sports editor Dave Zirin is the author of the forthcoming Bad Sports: How Owners are Ruining the Games we Love (Scribner) Receive his column every week by emailing dave@edgeofsports.com. Contact him at edgeofsports@gmail.com.]