Ted McLaughlin :
There is no correlation between taxes and employment

Just allowing the rich to keep more of the money they make doesn’t mean they will spend any of that money they get to keep to create any new jobs. 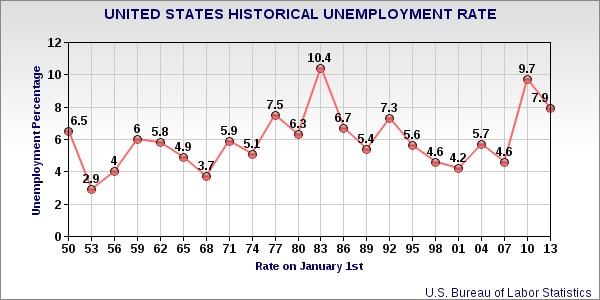 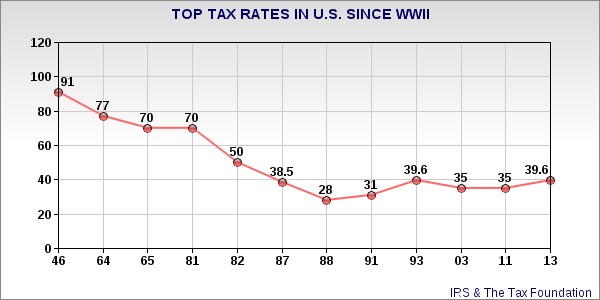 The charts show no correlation between the unemployment rate and the top tax rate.

The Republican idea that lower taxes on the rich (and on corporations) is the best way to spur job creation sounds good on the surface. The problem with it is that economics just doesn’t work that way. Just allowing the rich to keep more of the money they make doesn’t mean they will spend any of that money they get to keep to create any new jobs.

If the Republicans are right, why aren’t those corporations spending those trillions of dollars on new job creation? They are not creating new jobs because the tax rate has nothing to do with job creation. The rich (and their Republican lackeys) know this, but few of them want to admit it — because if most Americans realized this basic economic fact, they probably wouldn’t be willing to further lower the top tax rate (and might even want to raise it a bit).

Those examples alone show the Republican notion that tax cuts create jobs is a lie. The economic truth is that there is only one thing that determines whether jobs or created or destroyed (other than outsourcing, which destroys jobs even in a good economy) — and that is the level of demand for the goods and services of businesses.

When the demand is high, business will hire new workers to help them meet that high demand.

When the demand is high, business will hire new workers to help them meet that high demand. When demand is low, business will lay off workers not needed to meet the low demand (because keeping a worker not needed just cuts into profit). This is not a hard concept, and it is one understood by all good businessmen and women.

Let me add further that cutting the top tax rate does not create demand any more than it creates jobs. That is because there are not enough people making enough money to pay the top tax rate to effect demand in the economy (and those that do make that much already have the funds to purchase whatever they want).

In short, all Americans must once again be allowed to share in the country’s rising productivity — the working and middle classes through rising wages and the poor through improved social programs. Allowing all citizens to benefit from rising productivity (instead of letting the rich hog all of the rise) is the way to create demand (which creates jobs) and put our economy back on track. Sharing productivity works, while tax cuts (which are mostly enjoyed by the rich) do not.

We used to share rising productivity in this country, and expect the rich to pay a progressively larger share of income in taxes. Now we do neither — and that is what has caused this economic mess we find ourselves in. It is also what keeps us from fixing the economy.