Activist-scholars Bill Ayers and Bernardine Dohrn, who were preeminent — and controversial — figures in the ’60s-’70s New Left, were our guests for a very energetic and provocative hour on Rag Radio, Friday, January 17, 2014.

Rag Radio is a weekly syndicated radio program produced and hosted by long-time alternative journalist and Rag Blog editor Thorne Dreyer, himself a veteran of SDS and the ’60s New Left. Rag Radio is engineered and co-produced by Tracey Schulz and is recorded at the studios of KOOP 91.7-FM, a cooperatively-run all-volunteer community radio station in Austin, Texas.

Multi-media magus Bob Simmons, who was a pioneer in “underground” FM radio in the ’60s and ’70s, produced a handsome and compelling video of the spirited session, which is posted at YouTube and embedded above. The video was edited by Simmons and Jasper McCollum.

A podcast of the show can be downloaded at the Internet Archive — or you can listen to it here:

Bill Ayers and Bernardine Dohrn were leaders in SDS and the Weather Underground from the late 1960s through the ’70s. Dohrn was on the FBI’s Ten Most-Wanted List from 1070-1973. The two have been together for nearly 50 years and have been active in progressive causes through all the decades since the fugitive days. They are grandparents and live in the Hyde Park neighborhood of Chicago.

Bill and Bernardine were in Austin to headline a hugely successful launch party at the 5604 Manor Community Center for The Rag Blog‘s new expanded website at TheRagBlog.com. The Melancholy Ramblers performed at the event.

Ayers also did a reading from his recently-released Public Enemy: Confessions of an American Dissident at Austin’s leading independent bookstore, BookPeople.

In our Rag Radio interview we discuss Ayers’ acclaimed two-volume memoir — and the era it documents. Bill also addresses the 2008 presidential campaign, when his alleged friendship with Barack Obama emerged as a right-wing-media-driven “issue” — as well as the larger question of guilt by association that it begged.

We talk about Dohrn’s work in criminal justice reform and the tragic impact of mass incarceration in the U.S.; the status of the peace movement and the surprising cross-party public reaction to proposed plans to bomb Syria; and the endangered state of our public education system and the threat posed by the “educational reform” movement.

They also emphasize in the interview what they see as a strategic need for progressives to build a strong and active presence outside electoral politics and the Democratic Party.

Bill and Bernardine also address the significant legacy of the Occupy movement; the impact of journalist Glenn Greenwald and Edward Snowden’s NSA revelations; and the critical importance of progressive and alternative journalism today — and its parallels to the radical and underground media that proliferated in the ’60s and in which Austin’s legendary paper, The Rag, was a major player. 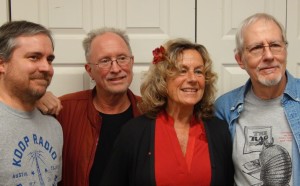 Bill Ayers is the author of the recently-released Public Enemy — reviewed on The Rag Blog by Alan Wieder. Public Enemy is a sequel to Ayers’ critically acclaimed memoir, Fugitive Days. A leading education activist, Ayers founded the Small Schools Workshop and was, until his retirement in 2010, Distinguished Professor of Education and Senior University Scholar at the University of Illinois at Chicago.

Ayers has written many books on educational theory, including, with Ryan Alexander-Tanner, To Teach: The Journey in Comics, and, with Rick Ayers, Teaching the Taboo: Courage and Imagination in the Classroom. Democracy Now’s Amy Goodman said that Bill Ayers, in the recently released Public Enemy, “writes eloquently of the profound challenges, the joys, and the toll of embracing a deep, lifelong commitment to social change.”

Bernardine Dohrn, activist, academic, and children’s rights, women’s rights, and peace advocate, is Clinical Professor at Northwestern University School of Law (retired), and founding director of the Children and Family Justice Center. She is co-author, with Bill Ayers, of Race Course: Against White Supremacy; co-editor of Sing A Battle Song: Documents of the Weather Underground; and wrote the introduction to Letters from Young Activists. She is author and co-editor of A Century of Juvenile Justice and Resisting Zero Tolerance: A Handbook for Parents, Teachers and Students.

Find articles by and about Bill Ayers and Bernardine Dohrn on The Rag Blog, and earlier interviews with Ayers and Dohrn on Rag Radio.

Bob Simmons, who produced the video, has been a radio producer and personality, oil biz entrepreneur, video maker, voice talent, construction worker, newspaper publisher, writer, and sports editor. Simmons has a storied career in radio, where he was a pioneer in the underground format in the ’60s and ’70s, and has been a producer and personality at legendary stations — including KUT, KPFA, KSAN, KKSN, and KFAT — in places like San Francisco, Austin, and Portland.

Read articles by Bob Simmons on The Rag Blog and interviews with Bob on Rag Radio.

Rag Radio is hosted and produced by Rag Blog editor Thorne Dreyer, a pioneer of the Sixties underground press movement. Dreyer was a founding editor of the original Rag, published in Austin from 1966-1977.

Rag Radio can be contacted at RagRadio@koop.org.