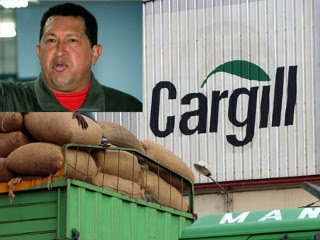 Venezuela says the plant, owned by the big US firm Cargill, had violated regulations on price controls intended to guarantee cheap food for the poor.

The move further increases President Hugo Chavez’s hold on the economy, after a series of recent take-overs of private and foreign-owned businesses.

They include a Cargill rice plant, and services companies in the oil industry.

Deputy Food Minister Rafael Coronado said the government would run the factory for 90 days, and would reassess the situation after that.

He said it has not been producing sufficient quantities of a type of pasta sold at cheap, government-established prices.

A rice mill owned by Cargill was taken over earlier this year, on the grounds that it was not producing rice at government-set prices.

Cargill had said it did not break the government’s pricing rules on rice because the mill did not produce the plain rice which is regulated.

Under the measure, 80% of all rice produced must be basic white rice. The measure also includes 95% of all cooking oil, coffee and sugar.

He nationalised Venezuela’s oil reserves, one of the largest in the Americas, two years ago.

This entry was posted in RagBlog and tagged Capitalism, Latin America, Socialism, Venezuela. Bookmark the permalink.