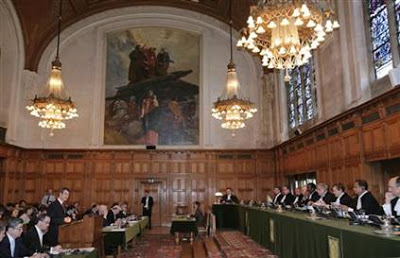 World Court judges on June 19 heard arguments in the case involving Mexican citizens on death row in the United States. Photo by Peter Dejong / AP.
Mexico had appealed to U.N. body on behalf of citizens on Texas death row.
July 16, 2008

THE HAGUE, Netherlands – The U.N.’s highest court on Wednesday ordered the United States to stay the executions of five Mexicans on Texas death row pending review of their cases.

Mexico had appealed to the World Court to block the executions. At hastily convened hearings last month, Mexico argued that the United States is defying a 2004 International Court of Justice order to review the cases of 51 Mexicans sentenced to death by state courts.

That order was based on the Hague-based court’s finding that the condemned prisoners had been denied the right to help from their consulate following their arrest.

Wednesday’s ruling comes less than three weeks before the first of the death row inmates, Jose Medellin, was scheduled for execution by lethal injection in Texas for taking part in the gang rape and murder of two teenage girls 15 years ago.

At last month’s hearings, Mexico’s chief advocate Juan Manuel Gomez-Robledo told the court the cases had not been systematically reviewed, and the U.S. was “in breach of its international obligations.”

John Bellinger III, the U.S. legal adviser, said then that the federal government had gone to “extraordinary lengths” to carry out the World Court’s directive and to intercede with the state courts.

Earlier, President Bush issued a directive to the state courts to abide by the decision and also asked Texas specifically to review Medellin’s case ahead of his planned Aug. 5 execution.

Those steps were “highly unusual,” Bellinger said. “It almost never happens that the federal government enters an appearance in state court proceedings.”

However, Texas refused, and in March the U.S. Supreme Court ruled by a 6-3 vote that Bush lacked the authority to compel state courts to comply with the judgment from The Hague.

Informally known as the World Court, the tribunal is the U.N.’s judicial arm for resolving disputes among nations. Its decisions are binding and final, but it has no enforcement powers.