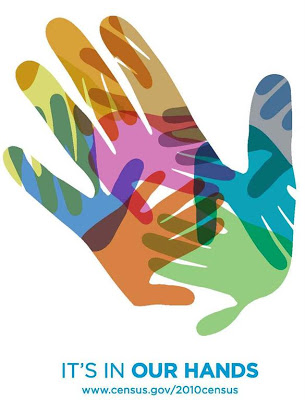 And our hands have 10 fingers.

The 2010 Census form came in the mail Tuesday morning, March 16th. I made a cup of coffee, sat down and opened it up, anxious to see what information they were seeking this time around. I remember earlier forms over the years, one of which even asked how many bathroom toilets were in the house. There are always questions about income, marital status, type of employment, education level, and many other varied questions.

Well, there was none of that this time. No siree! There are only 10 questions. That has to be why they dreamed up their 2010 Census logo with all the fingers. One question for each finger unless you have been in an industrial accident.

But you don’t know that there are just 10 questions when you start off because there are several pages even with a fold out. So off I went, pencil at the ready to answer dozens of probing questions to help profile America with data that will be used for the next decade.

At the very beginning we are instructed to “Count all people, including babies who live and sleep here most of the time.”

Pressing on, question one asks, existentially and mystically:

1. How many were living or staying in this house, apartment or mobile home on April 1, 2010?

Using a crystal ball, peering into the future, since April 1st is more than two weeks away, I put my number in the “Person 1” box, assuming that no gypsies or long lost relatives would be “staying,” and moved on to question two. This is the first U.S. Census to require clairvoyance. The more vernacular “staying” replaces “reside,” a word which some might not easily understand.

2. Were there any additional people staying here April 1, 2010 that you did not include in Question 1?

Trick question? There are five boxes that make sure you know that children, such as newborn babies or foster children, relatives, cousins, in-laws, non relatives such as roommates, live-in baby sitters or people staying here temporarily “are people.” I checked in the fifth box, “No additional people,” which is what I told them in question one. Question three gets more specific.

3. Is this house, apartment or mobile home…

Four boxes allow you to mark, “…Owned with a mortgage, Owned free and clear, Rented, or Occupied without payment or rent?” What a mother lode of precise information this gem of a question will provide with joblessness, foreclosures, and evictions having displaced and scattered “persons” across America.

They need another box for those living in tents and large cardboard boxes. Maybe because so many Americans have been displaced by the Wall Street crash that is why the questions use “staying” as in “we are staying at the Salvation Army shelter.”

Question four wants my telephone number, “Where we may call you if we don’t understand an answer.” Only three questions in to the census, all of which are answered by putting an “X” in one of several possible boxes and they are worried about not understanding an answer. I wish there was a box to check if I didn’t understand why civil service employees and bureaucratic census form designers are never fired for being incredibly incompetent and terminally dense.

Now we start to get into the real meat of this penetrating look into the makeup of our nation… Question five! It wants my name… and middle initial!

Question seven wants “Person 1’s age, and what is Person 1’s date of birth.” I fill in my age and DOB. Certainly this will get going in a minute, I’m sure. At this point, I do not realize I am only three questions away from being finished and press on to question eight.

8. Is Person 1 of Hispanic, Latino or Spanish origin?

Box one is one word: “White.” Then twelve more boxes allow one to mix and match your parentage by checking appropriate boxes including one box that says, “Black, African American or Negro” which I guess is seeking political correctness, but there was no “White, anglo, or Caucasian” just “White.” Again, maybe Caucasian is too tough a word for lots of white folks to read today?

You may write in the name of American Indian or Alaska Native “enrolled or tribe” followed by a rainbow of a dozen more possibilities from Asia, the Philippines, “Guamanian or Chamorro” on and on… and then, a final special box for: “Some other race.”

I had to look up that one. A 2006 article reported that, “After the 2000 Census, the “Some other race” category was the third largest race group in the United States, according to Charles Louis Kincannon, current director of the Census Bureau. However, 97 percent of those who identified as “Some other race” were Hispanic.” It appears that even back on 2006 they couldn’t remove that meaningless race category “in time for the 2010 Census.”

Question ten at the bottom of page one asks a final penetrating, existential question:

10. Does Person 1 sometimes live or stay somewhere else?

Confounded by that one I turn the page to look over the rest of the “what level of education and how many commodes” questions. At the top of the next page, it says “Person 2.” and asks the same 10 questions I just completed. This is repeated in column after column for up to a total of 12 people “living or staying” in my house, apartment or mobile home. This comprises the remaining four pages in the fold-out form. Twelve people in a trailer? No wonder they mail these things out instead of hand counting.

Beneath the final questions for “Person 12,” a bold type line says “Thank you for completing your official 2010 Census form.” At this point I realized there were only 10 questions.

That was it. Baffled and sure that I had gotten some sort of short form, I went to the official U.S. Government 2010 Census web site which proudly proclaims, “One of the shortest forms in history – 10 Questions in 10 Minutes.”

Then, to urge us to fill in those 10 questions in 10 minutes, they continue, “Each question helps to determine how more than $400 billion will be allocated to communities across the country.”

They are serious. The dumbed-down, lowest common denominator cop out approach that has plunged the American educational system into a black hole has been used to create the 2010 Census form.

This entry was posted in Rag Bloggers and tagged Larry Ray, U.S. Census. Bookmark the permalink.