A Nuclear Burma? My Oh Myanmar 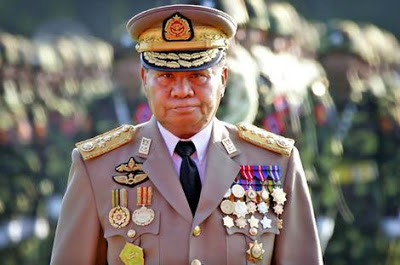 It will do no one any good, including the Burmese people, to allow these bloodthirsty nuts to get nuclear weapons and the missiles to deliver them.

That’s the rumor going around diplomatic circles, and it looks like the United States government is taking it seriously. Secretary of State Clinton says, “We know that there are also growing concerns about military cooperation between North Korea and Burma, which we take very seriously. It would be destabilising for the region. It would pose a direct threat to Burma’s neighbours.”

It certainly would destabilize the region. A country doesn’t develop nuclear missile technology to control its own population (besides they seem to be doing very well at that with the weapons they already have). The only real use for that technology is to threaten or attack other countries.

Do the military dictators in Burma harbor delusions of becoming the “big dog” in South and Southeast Asia? Do they want to use the threat of nuclear destruction to control the region? We already know this is a regime that has absolutely no respect for human life when it comes to getting what they want. These guys may actually be depraved enough to use nuclear weapons if they get them.

Frankly, the United States has too many friends in the area to allow Burma to become a nuclear nation. There are also several countries in the area that are unlikely to allow that to happen. I’m thinking of India and China, who won’t want to be put in the position of a possible nuclear war or intimidation from Burma. Either could take action on its own. So could Vietnam. They proved with Cambodia that they won’t let some nut destabilize the region.

What makes the U.S. government think Burma is trying to get nuclear weapon technology? There is no “smoking gun” evidence yet, but there are some worrying signs. First, the Burmese government has been doing business with Namchongang Trading Company (NCG). NCG is a North Korean company that trades in nuclear technology. It’s chief executive is a nuclear expert who was once North Korea’s delegate to the International Atomic Energy Agency. The company also helped Syria build a nuclear reactor (which was destroyed by the Israelis).

Second, Burma has tried to get some suspicious high technology. David Albright, head of the Institute for Science and International Security (which monitors nuclear proliferation), said, “This is hi-tech equipment, capable of making very high precision components. It has other end uses, but it’s hard to see why else Burma would be buying it.”

Third, a North Korean and two Japanese businessmen were arrested last month for trying to export a magnetometer to Burma. This is a necessary element in missile guidance systems.

Fourth, two years ago, Burma tried to buy the technology for a nuclear reactor from Russia. Russia bowed to international pressure and canceled the deal.

Fifth, the North Korean freighter (Kam Nong I), which had made trips in the past to Burma, turned around and went back to North Korea after it could not shake a U.S. Navy ship that was tailing it. South Korean Intelligence says “satellite images suggested the Kang Nam I was carrying equipment for a nuclear programme and Scud-type missiles.”

That’s plenty enough to bother me. It looks like it’s time to do something about the military dictators of Burma. It will do no one any good, including the Burmese people, to allow these bloodthirsty nuts to get nuclear weapons and the missiles to deliver them.

This entry was posted in RagBlog and tagged Myanmar, North Korea, Nuclear Weapons. Bookmark the permalink.