Alan Waldman :
‘Manchild’ is clever British series about four 50-year-old men who struggle with the challenges of aging

The cast is outstanding, and the quartet’s vain attempts to recapture their youth are amusingly presented. 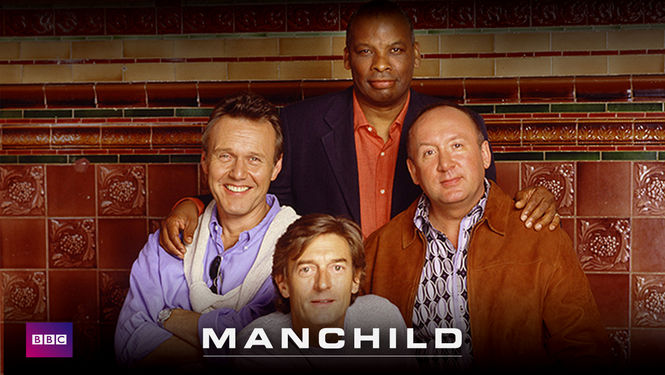 Manchild is a light-hearted, politically incorrect comedy-drama about four 50-year-old men who spend their days and nights attempting to prove that they are not yet past their prime. Stockbroker Terry, orthodontist James, art dealer Patrick, and married decking king Gary are friends from schooldays.

Their efforts to bring back their heady carefree bachelor days mostly make them look silly, although they have the money for the hip clothes, motorbikes, and beautiful young girlfriends. While they’d never admit it, they worry about health, impotence, ex-wives, and children who will not go away, aging parents, lost youth, a succession of (younger) girlfriends, and how to enjoy the wealth and success they worked so hard to achieve.

Manchild ran in Britain for two seasons and 15 episodes between 2002 and 2003. In the U.S. the UK original version ran on BBC America. The first seven episodes are on Netflix and some of the second series’ episodes are also available for free on YouTube. Here is one.

What is most enjoyable about this series is the fine acting and character creation by the performers. Nigel Havers has 89 credits for films and series and earned a BAFTA nomination for Chariots of Fire. Don Warrington was in 63 series including Rising Damp  and New Street Law. Anthony Head has a whopping 95 credits, including Little Britain and Buffy the Vampire Slayer.

Ray Burdis has 43 credits including Ghandi. His wife is played by Lindsey Coulson, who has 30 credits and a win and two noms for EastEnders. Frances Barber’s 128 credits include the film Prick Up Your Ears.

These four Londoners, who have remained best friends and confidants well past their sexual prime, still have a keen appetite for the ladies. They are no longer physically first-choice, but they have sufficient means (financial and socially, as they are successful in their respective professions) to be quite attractive. Alas, the wisdom of experience often proves rather illusory.

Havers’ character Terry once declares “Time it right, and your fifties can once again be a full-time, full-on, hedonistic quest for pleasure. He also opines “Honesty is a highly overrated virtue, unless you can turn it to your advantage.”

The pilot of an American version of the series aired on Showtime after being pitched as a male Sex in the City. It was produced by Showtime and starred James Purefoy, Kevin Smith, John Corbett, and Paul Hipp. It made significant changes to the characters and premise as it moved the setting from London to Los Angeles.