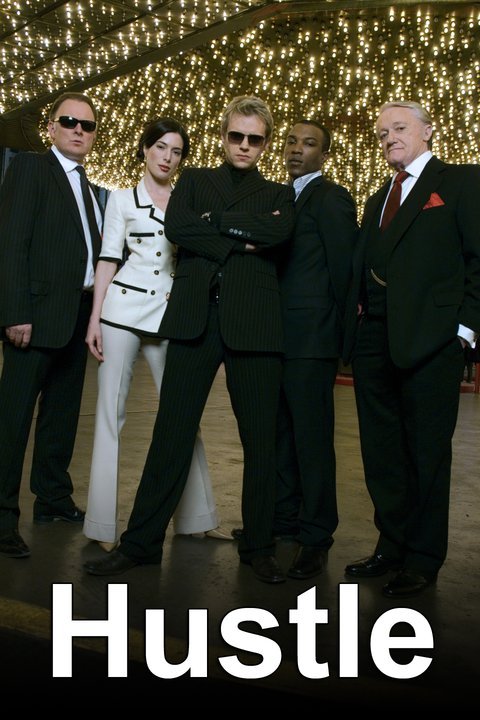 Hustle is a compelling pleasure.

Hustle is a lively British con-men-vs.-slimy-aristocrats series that ran for eight seasons and 48 episodes, from 2004 to 2014. Four series and 24 episodes air on Netflix, and many are free on YouTube, such as this one.

Hustle follows a group of con artists who specialize in “long cons” — extended deceptions which require greater commitment, but which return a higher reward than simple confidence tricks. First the “marks” think they are getting away with something, and then the tables are turned.

It earned seven award nominations, including two Emmys, two Royal Television Societys, a BAFTA, a DGA “Best Director” nod and a Saturn “Best TV Series on DVD.” Of 17,890 viewers polled at imdb.com, more than 93.85% gave it thumbs up and 30.6% rated it a perfect 10. It was big with all demos but slightly strongest with viewers 18 and younger.

Hustle comes from the same brilliant production team that created and popularized the early seasons of the outstanding spy series Spooks (MI-5). Creator Tony Jordan is one of the most prominent and respected screenwriters in the UK, responsible for hit series such as Life on Mars (for which he won a Broadcasting Press Guild’s best TV writer award), Holby Blue (2007 nom for “Best New Series”), and famous for his work as a lead writer (200 episodes) and story consultant for 18 years on the beloved, long-running soap EastEnders.

He was honored at the 2007 British Soap Awards with the Special Achievement Award for his work on EastEnders, and in 2008 Broadcast magazine listed him as the number-one television screenwriter in the UK. 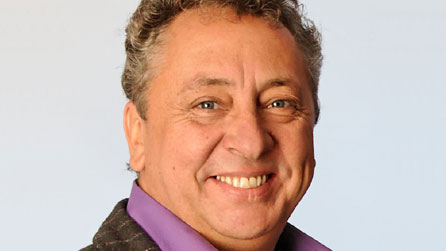 I’ve had dealings with television executives on both sides of the Atlantic whose vision for a show differed from mine, but on each occasion it all came down to a simple choice: do I prostitute my vision for a fast buck or do I stop the process and put my beloved script back in the drawer and wait for its time to come? As I write this, my bottom drawer is bulging with scripts that saw the light of day briefly and came under sustained attack before being rescued from the brink of whoredom. Why? Because I’m an artist; not a fucking arse licker.

Adrian Lester (award-nominated for films Primary Colors and Love’s Labours Lost) is excellent as Michael “Mickey Bricks” Stone, the group’s leader and “inside man.” An ambitious, intelligent and driven con man, Stone is a long-con expert with a careful eye for detail and for studiously covering all the angles. Trivia item: Clive Owen turned down the role of Mickey.

Robert Vaughn (three awards and nine noms for works including The Man from U.N.C.L.E, Washington: Behind Closed Doors [won Emmy], Bullitt and The Young Philadelphians) has an astonishing 227 film and TV credits. He plays Albert Stroller, the elderly “roper,” responsible for ensnaring potential marks. Jaime Murray, (Saturn award winner and wonderfully nude in Dexter) plays Stacie Monroe, “the lure,” who uses her sex appeal to manipulate potential marks, and in smaller short cons to raise funds for the team’s activities.

Robert Glenister, (who has 74 film and TV credits for works such as Vera, MI-5, A Touch of Frost, Midsomer Murders, and Chancer) plays Ash “Three Socks” Morgan, the team’s “fixer,” responsible for setting up the locations, people, and items needed to convince the mark of the con’s legitimacy. Marc Warren (with 81 TV and film credits, including Life on Mars, The Vice, The Good Wife, and the superb original version of State of Play), is cocky young Danny Blue, a “short con” grifter who joins the group and then takes over the leadership when Mickey goes overseas.

Adrian Lester once described the difference between the long con and more common confidence tricks: “…you take a mark and convince them of a certain situation or a lie, and you send them away to get more money and come back and give it to you.”

The team adheres to the credo ‘you can’t cheat an honest man.’

The team adheres to the credo “you can’t cheat an honest man,” with all of their marks being people who have some kind of illegal or immoral activity in their pasts or are simply demonstrating a fundamentally negative personality. In one episode, Mickey states that he selects marks whom he personally has reason to dislike in order to ensure that the con is never exclusively about the money.

Each episode also amounts to a confidence game played upon the viewers through the use of misdirection and hidden plot details that are revealed at the end of the story. Not all cons depicted are successful, and some episodes focus on the characters dealing with the consequences of their actions. However, even if a con does fail, the characters usually come out on top in some way or other.

The program was an immediate success, attracting over 6.7 million viewers and attracting favorable reviews. Series 7 was the most watched, with viewing figures reaching 7.2 million. Before the first series finished airing, the BBC had sold rebroadcast licenses to TV channels in 12 countries, including Italy, Norway, Germany, Israel, Russia, and the Netherlands. The series was later licensed to broadcasters in India and South America. The first two seasons premiered in the U.S. in January 2006 on AMC.

The Guardian described Hustle as “defiantly high-concept, tightly plotted, knowing stuff… a laugh; slick, glossy, and smart certainly, but a laugh all the same. The Times summarized the series as “an engaging, well-acted, snappily directed drama… sleekly edited, flatteringly lit and stylishly executed.”

In February 2009, executive producer, Simon Crawford Collins announced that a movie version is to be produced by a major U.S. studio, with a screenplay by Tony Jordan.