Yael Stone is excellent as a police detective cracking a string of 80 brutal gay killings. 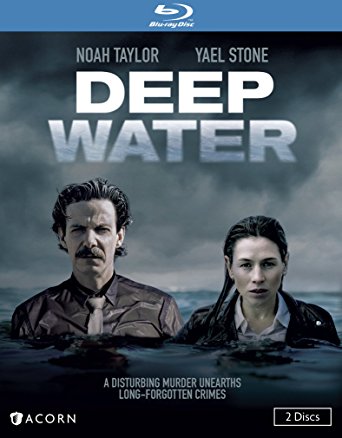 In Orange is the New Black, Yael Stone was very convincing as whiny-voiced, Italian-American prison van-driving inmate Lorna Morello, but in the outstanding 2016 Australian police drama Deep Water, it is shocking to hear her return to her normal accent from Down Under. Stone is actually an Aussie, the granddaughter of Czech Jewish holocaust survivors.

In the four-part cop thriller Deep Water, co-starring Noah Taylor, whom I remember as a teenager in Flirting with young Nicole Kidman and Thandie Newton back in 1991, she investigates a brutal murder above Sydney’s famed Bondi Beach. This is based on a series of 30-80 actual unsolved gay murders in Sydney’s Eastern suburbs and beaches in the ‘80s and ‘90s, covered in a separate documentary: Deep Water: The Real Story (2016).

In Deep Water, available on Netflix Instant streaming,the mutilated corpse of a young man is found in a beachfront apartment in Bondi, and Tori Lustigman and Nick Manning are assigned the case, wondering if this brutal murder is domestic, a robbery gone wrong, or a gay hate crime.

Then, as other ritualistic murders occur, they discover the killer is using the app THRUSTR to procure his victims, and that any local guy using that app is now at risk, and it’s a race against the clock to catch the serial killer before he strikes again.

With mounting evidence to suggest the perpetrator has killed before, Tori and Nick start digging through old investigations and learn that in the ‘80s and ‘90s there were up to 80 possible murders of gay men in New South Wales — unexplained deaths, “suicides,” and disappearances. Many of these killings were linked to gay bashings by youth gangs, a blood sport that went largely unpunished.

As they meet more victims from the uninvestigated past crimes, Tori and Nick become convinced that the current killer is somehow connected. Haunted by the disappearance of her teenage brother, Tori soon becomes fixed on it. When more ritualistic murders occur that have the same bizarre signature, Tori and Nick put their relationships, their careers and lives on the line to reveal the truth.

More than 86% of 967 imdb viewers gave Deep Water thumbs up, and it was a hit with all demos, especially females 29 and younger.

My wife and I were fascinated by this miniseries. We remember sitting on Bondi Beach, eating delicious Australian meat pies and watching the surf roll in. We saw several of the film’s locations.

This miniseries was written by Kris Wyld (who has five Aussie award wins and three noms over the past 20 years for East West 101, White Collar Blue, and Wildside) and Kym Goldsworthy (two wins and a nom over the past 23 years for The Roly Poly Man, Pig’s Breakfast, and Tracey McBean).

Yael Stone has won 3 SAG awards for Orange is the New Black. She has 12 other TV and film credits. Noah Taylor has six wins and 10 noms for Shine, The Year My Voice Broke, Almost Famous, and Simon Magus. I’ve seen about a half-dozen of his 65 credits. Danielle Cormack earned four major awards as the star of Wentworth and in Underbelly and was also in Rake and 38 other productions Down Under. Craig McLachlan (who plays the villain here) has four wins and four noms over the past 32 years for The Doctor Blake Mysteries, Home and Away, and Neighbours.